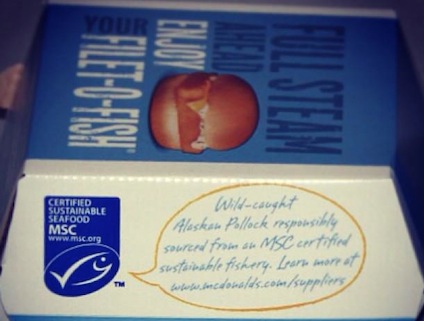 McDonald's Filet o' Fish, since 2007 sourced from MSC-certified fisheries, will soon be getting a new eco-package. Marine Stewardship Council

Last week, the Twitternets were abuzz with news that McDonald’s is going to (as @HuffPostFood put it) “serve all sustainable seafood” at its 14,000 US stores. Actually, as Associated Press reports, the fast-food giant has been sourcing exclusively from fisheries certified by the Marine Stewardship Council (MSC) since 2007. What it announced this week was that the packaging on its Filet O’ Fish sandwich—and that of a new product, Fish McBites—will soon be adorned with the Marine Stewardship Council’s blue ecolabel.

So strip away the hype, and what you’ve got here is a packaging change and a product launch. Way to get scads of free publicity, McD’s marketing team!

So how significant is that McDonald’s is using MSC-certified fish? When MSC re-certified the Alaskan pollock fishery in 2010, one of the group’s officials declared it, “one of the best managed fisheries in the world”—an assessment that’s often bandied about. But Monterey Bay Aquarium’s highly respected Seafood Watch program rates the fishery a “good alternative,” one level below its highest sustainability accolade, “Best Choice.” “Alaska Pollock populations are moderately healthy, but their numbers have been declining,” MBA reports. “Alaska Pollock are now at their lowest levels in over 20 years.” MBQ also notes that that while the fishing fleets that operate there use trawling gear that’s designed not to damage the seafloor, “these midwater nets contact the seafloor an estimated 44% of the time—resulting in severe damage to seafloor habitats of the Bering Sea.” MBA also notes possible bycatch concerns involving Chinook salmon.

And the UK-based MSC-based has come under criticism for being overly industry-friendly in the past—such as in 2010, when it certified a Danish company’s Antarctic krill harvesting, prompting a Greenpeace campaigner to declare that MSC had given an “unofficial nod to the basic idea that vacuuming up the tiny life forms forming the foundations of the oceanic ecosystem is an acceptable practice.” Similar outrage erupted that same year when MSC certified British Columbia’s troubled sockeye salmon fishery.

All of that aside, McDonald’s could be doing a hell of a lot worse than stuffing its fryers with fish rated a “good alternative” by Monterey Bay Aquarium. And exposing its millions of customers to the MSC label might inspire some of them to learn more about the plight of the oceans. Let’s just hope that the Alasksan pollock fishery is robust enough to handle the Fish McBite, should that product take off.