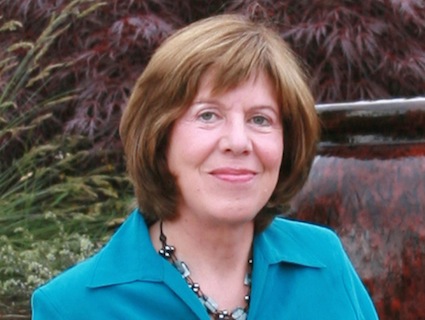 Normally I ignore the latest diet craze. But I can’t resist the message of Jo Robinson’s new book Eating on the Wild Side. In it, Robinson argues that humanity’s 10,000-year-old fixation on agriculture has stripped our most commonly eaten foods of most of their phytonutrients, which are plant-based chemical compounds that keep us healthy. Her recent New York Times op-ed on the topic inspired me to pen a paean to edible weeds. But you don’t need to go feral to boost your phytonutrient intake, Robinson shows. She gives tips on how to navigate the supermarket produce shelf and the farmers market to find phytonutrient-dense foods not very far off from what our hunter-gatherer ancestors thrived on. After a phone conversation recently, I hung up with the urge to crack open a hoppy beer—and not out of stress.

Mother Jones: What exactly is a phytonutrient?

Jo Robinson: The technical term for phytonutrients is polyphenols. They are substances produced by plants, a lot of them for self-defense. Twenty-five thousand different ones have been identified. Vitamins E, C, and beta-carotene [are examples]. Many of them are potent antioxidants, while some don’t have antioxidant activity but boost our own antioxidant defense system. Others are involved in communication between cells, many affect gene expression, and others have detoxifying functions.

MJ: Of course, for the processed-food industry, the emergence of phytonutrients must be a huge temptation to roll out stuff like, frozen waffles…now with the compound that makes tomatoes red, lycopene! Or just straight lycopene pills. Anything wrong with that?

JR: In a given fruit or vegetable, there might be 100 different phytonutrients, many of them unnamed, and they act synergistically. We really don’t understand the full extent of how they interact, and how those interactions impact our health. So to fall upon just one thing—like vitamin E, beta-carotene, vitamin C—isn’t likely to help much.

MJ: You write that modern varieties of common fruits and veggies are bred to have low phytonutrient levels, while wild varieties teem with them. Should we all start scavenging the woods for edible weeds?

JR: My goal is not to have people go out to the forest and gather plants. There are excellent books on that, and I enjoy them. My book is for people who shop in the grocery store and the farmers market, and for people who grow their own food. So every chapter ends with specific varieties that you can find in the supermarket that are equivalent or at least close to wild plants in carrying phytonutrients.

“Scallions are just as good for you as wild onions.”

MJ: What are some examples of good stuff you can find at the supermarket?

JR: Well, scallions, also called green onions—they’re just as good for you as wild onions. I’m encouraging people to use them liberally, because they have proven anti-cancer properties and are very high in antioxidants. Also, small, red cherry tomatoes—some of them come very close to the wild tomatoes in the Andes, which have much more lycopene, a phytonutrient that many people have heard about. Then there’s salad greens—choose leafy ones rather than ones that are closed up [like iceberg lettuce]. When you go look for wild greens in the forest, you don’t see ones that look like cabbages, where all the leaves are wrapped up tight. When a lettuce variety forms a head, the leaves inside don’t have to produce phytonutrients to protect themselves from UV light. So they’re very low in antioxidants. Iceberg lettuce, believe it or not, is still our most commonly eaten lettuce. But if you go to these leafy ones—especially ones that contain some red color—some of them are equivalent to what you’d find foraging.

MJ: What about organic agriculture? My understanding is that organically managed plants often develop more phytonutrients because they have to fend for themselves more against insects and diseases and whatnot.

“You can’t just say, ‘All organic food is more nutritious because its raised organically.'”

JR: I have come across a dozen studies that shows that you get more phytonutrients and more minerals and vitamins from organic, but there are also studies—and I’m going to shout this one out, because don’t want people to be blind to the research—that show that plants raised conventionally have more phytonutrients. And they trace it to the amount of nitrogen in the fertilizer used on conventional farms. So there’s not a blanket answer, and you can’t just say, “All organic food is more nutritious because its raised organically.” It turns out, I think, that it’s the variety that matters more than the way we produce it. The gold standard is choosing the most nutritious varieties and raising them organically, and that’s what I recommend.

MJ: Any advantage to sourcing from nearby farmers vs. produce shipped in from God knows where?

JR: In many cases, yes. There are plants that have what researchers call a high respiration rate—they burn through their antioxidants starting the moment that you harvest them. These also tend to be some of the most nutritious vegetables of all—asparagus, kale, broccoli, leaf lettuce, spinach. By the time they get to the grocery store, many of them have lost much of their food value. Many farmers market growers might not know that—they’re not taking advantage of that as a marketing device.

MJ: As a fan of cooking with herbs, I was heartened to read that they tend to have lots of phytonutrients.

JR: They do, and the reason is obvious: because we valued them for their essential oils and strong flavors, so we haven’t bothered to breed out those things which are rich in phytonutrients. I definitely encourage people to eat a lot more fresh herbs.

MJ: What are some of the more phytonutrient-rich herbs?

JR [shaking off interruption]: …and basil, and tarragon, and you’ll find recipes that include a lot of those things. You can make parsley pesto, which is better for you than basil pesto. You can also take parsley and chop it up and add it to your soups and your stews and your eggs—consider it a main nutritional component not just a garnish.

MJ: Sorry to have interrupted. I’m a huge parsley fan. Where do you stand on another favorite of mine, cilantro?

JR: Cilantro is excellent as well. I grew lots of cilantro. Some people hate cilantro—it’s genetic, it tastes like soap to them—but for people who love cilantro, I say the more the better.

JR: Very high in phytonutrients, but also strongly flavored, so eat as much of that as you can.

“Red wines are much higher in phytonutrients than white wines.”

MJ: Now that we’re talking about my favorite stuff, we may as well discuss some of my vices. What wine grape varietals are especially high in phytos?

JR: Almost invariably, most of them [wine grape varietals] are higher in phytonutrients than the one we eat fresh, table grapes, and the exceptions would be black and red table grapes, some of them approach the ones that we make wine out of.

MJ: Great. But any differences among them—say, cabernet versus pinot noir?

JR: Of course, red wines are much higher in phytonutrients than white wines. In terms of reds, pinot noir is kind of middle of the road in terms of antioxidant activity, because in a way you can just hold that bottle of red wine up to the light and the darker it is, denser, the more phytonutrients it contains. So the ones that are really high are cabernet sauvignon, merlot, and Sangiovese. Also, oak-aged wines—oak has a lot of phytonutrients in it which gets into the wine.

MJ: Damn it. I like my lighter red wines. Guess I just have to up my intake! Is it true that hops in beer are excellent for you?

JR: Coffee is very high in something called chlorogenic acid, which is a good phytonutrient, and the darker the brew, the better. Espresso is particularly high, because it tends to be darker roasted.

JR: Roasting introduces another factor—it caramelizes some of the sugars in coffee, and that caramelization process increases the antioxidant activity. Dark-roasted espresso…is favored throughout many European countries.

MJ: I can’t stop with the vices. What about desserts? How would one make a phytonutrient-dense dessert?

“Berries are unusual in that when you cook them, you increase the phytonutrient content.”

JR: Berries are probably going to be the best choice. So berry pies, cobblers, turnovers, and tarts are excellent. Berries are unusual in that when you cook them, you increase the phytonutrient content because a lot of them are rich in anthocyanins, and they’re one of the phytonutrients that become more intense with the heat. An example…cooked blueberries are better for you than fresh blueberries. Apple desserts are good, too. Especially if you pick the [phytonutirent-dense] varieties I recommend, like, Granny Smith, and include the skins. A lot of people don’t like to include the skins, so I have a recipe in the book for how to make an apple crisp that has the skins incorporated in such a way that they’re not sharp and you don’t even recognize them. Also, kiwis are high, pomegranates are very high, so desserts that include those would be excellent.

MJ: I have to say, you’ve already inspired one major change in my cooking. I use a lot of garlic, and I’ve instituted your 10-minute rule: I wait 10 minutes after chopping to add garlic to a hot pan, to let the phytonutrients alliinase and alliin interact and form allicin, which you say is a potent cancer fighter.

JR: It’s amazing—the study on garlic and allicin is from 2004, and it has just been sitting in a journal. There’s so much stuff that people can do right now that are just sitting in thousands of journals that no one bothers to tell people about—that’s one of the things I’m doing in this book.