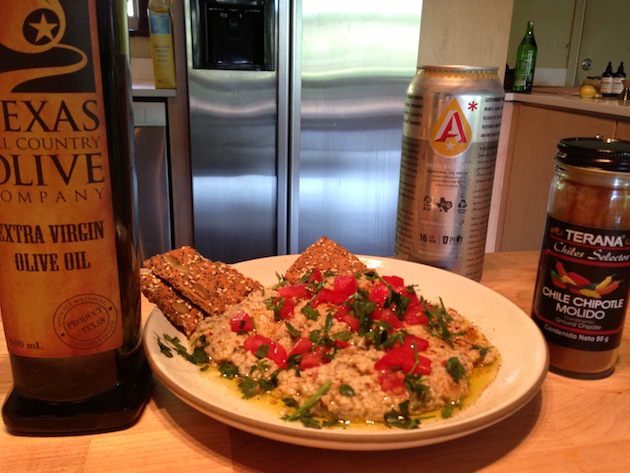 During the broiling-hot Texas summer, I search for dishes that fall into a sweet and cool spot: seasonal produce prepared with minimal heat. Tomatoes are easy. Eggplant, one of my very vegetables, presents a special challenge. The ways that I love to cook it—searing and roasting—are just too damned hot for August. I sometimes grill it, of course, but standing in 100-degree heat over a fire doesn’t always appeal.

After a sweaty recent visit to the farmers market, I found myself the owner of three gorgeous purple eggplants—and feeling no desire to fire up the stove or grill. Then, from the depths of my culinary memory, I recovered a technique I learned from Paula Wolfert’s outstanding 1994 book The Cooking of the Eastern Mediterranean: You simply wrap the eggplants in foil, prick them all over with the tines of a fork, and cook them on a gas stovetop over a low flame—so low it barely heats the kitchen. Then you separate the flesh from the skin and puree it with a few other ingredients into baba ghanoush, the classic Levantine eggplant spread. The open flame gives the eggplant a subtle smokiness that really elevates the dish. (Of course, cooking it over a charcoal grill is even better.)

Guided by Wolfert, one of my culinary heroes, that’s exactly what I did. The following recipe is adapted from Cooking of the Eastern Mediterranean, which brims with summer-ready ideas. (Note to self: try a chilled version of “Yogurt and Leek Soup with Mint.”) 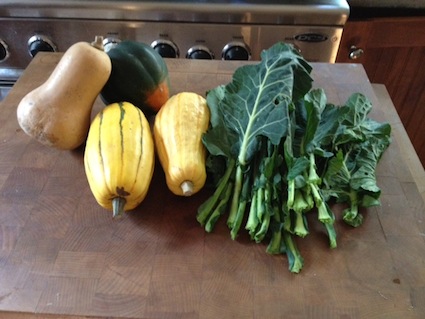 Trim the stems from the eggplants and wrap them with foil. Using a fork, prick them in several places, all over. Set two gas stovetop burners to a low setting, and place two of the eggplants on a grate directly over one, and the third over another (see photo). Let then cook, turning them occasionally with a tongs, until they become quite squishy and are releasing steam. Their collapse should be complete, abject. Wolfert suggests dumping the cooked eggplants into a basin of cold water and peeling them immediately. I simply let them sit for 30 minutes or so in a bowl to cool, then I stripped away the foil, rinsed them in cold water, and then peeled them over a bowl. 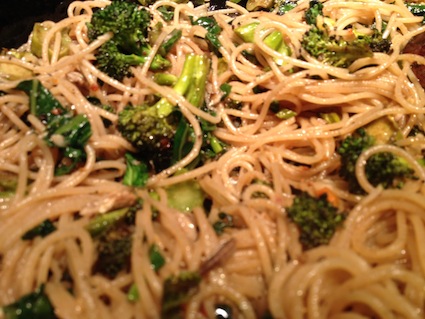 Add the tahini, the garlic, and the onion (if using) to the basin of a food processor fitted with a blade. Squeeze half of the lemon (over a metal strainer to catch the seeds) into the basin, and add a pinch of salt and a grind of pepper. Process until absolutely smooth, if necessary pushing down the sides of the basin with a rubber spatula in between whirs. Creaming the tahini, lemon, and garlic at this point is Wolfert’s brilliant baba—it will give the final product a gorgeous lightness. Now add the eggplant flesh, two tablespoons of water, a glug of olive oil, and puree until absolutely smooth, again pausing to intervene with a spatula if necessary. If you’re having trouble achieving absolute smoothness, add another tablespoon of water. Now taste, adding a bit more salt or lemon if it seems necessary. 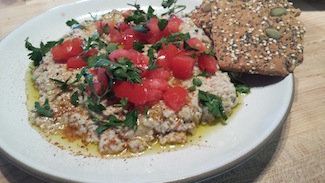 To serve, spread as much baba ghanoush as you expect to eat in one sitting on a plate. (The rest should be kept tightly covered in the fridge—it will maintain peak flavor for a few days). Give it a few lashings of your best olive oil, a brisk sprinkle of ground chile, some grinds of black pepper, and some diced tomato and chopped parsley. Serve with good crackers. This spread would also be a good excuse to make Alice Waters’ fast-and-easy flatbread—but that would mean turning up a stovetop burner all the way to medium.