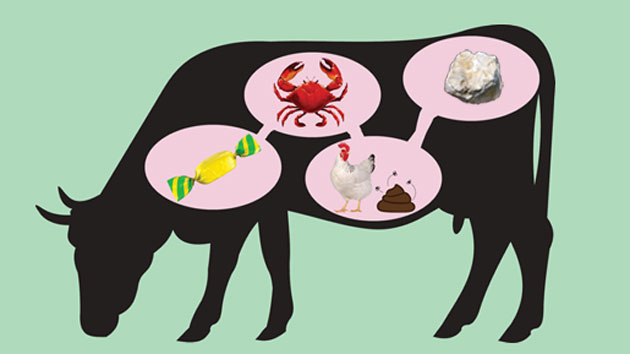 In addition to the old standbys of corn, soy, hay (and, uh, drugs), “there’s a lot of stuff which the general public might not think of as feeds which are actually quite common,” says Cory Parsons, a livestock nutrition expert at Oregon State University. For example:

Sawdust: Decades ago, when Bob Batey, an eastern Iowa entrepreneur, observed cows gobbling up sawdust hosed down from his paper mill, he had an idea: Why not make the stuff into a commercial cattle feed? Sawdust is made largely of cellulose, a carbohydrate, but it’s bound together with a compound called lignin, which makes it hard to digest. To strip the lignin, Batey soaked some of the stuff in nitric acid, and voilà! The cows were ready to chow down. “They like it,” he says. “It’s good for them. It’s economical. And it’s green.”

But it was only after a 2012 drought laid waste to local hay and grass that Batey put his idea into action. He teamed up with local feed producers to devise a mix of sawdust, corn, vitamins, and minerals. While ranchers have not yet widely adopted the sawdust feed, Byron Leu, a regional beef specialist at Iowa State University, said with corn prices high, the stuff could catch on “pretty fast.” The Iowa City Gazette noted that in tests, the cows ate the stuff “like candy.” Speaking of which…

Candy, wrapper and all: Ranchers report feeding their beef steers and dairy cows a variety of bulk candy, including gummy worms, marshmallows, hard candy, sprinkles, chocolate, candy corn, and hot chocolate mix. Candy provides sugar that cows would usually get from corn, giving them more energy and making them fatter. When corn prices skyrocketed, the practice became popular: In fall 2012, one candy supplier who sells farmers and ranchers “salvage” chocolate—that’s imperfect and broken chocolates—said the price of the stuff had recently doubled.

In some cases, ranchers found, the candy feed comes wrapped. Asked if he was concerned about his cattle eating plastic, one animal nutrition expert in Tennessee said he was not worried. “I think it would pass through just like excess fiber would.” 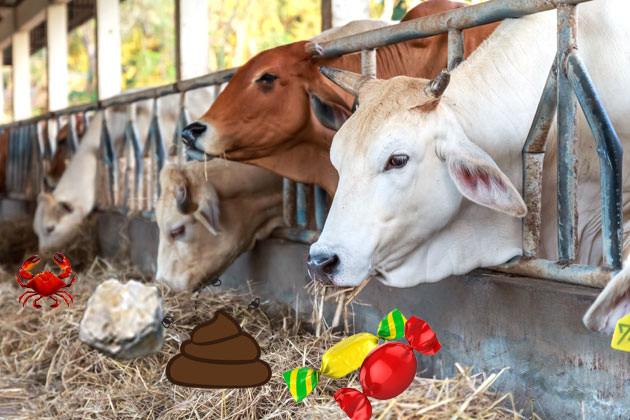 Chicken shit: What’s not to love about the fecal waste of America’s 36-million-plus broiler chickens? It’s plentiful and cheap. But according to a recent OnEarth story by Brad Jacobson, the problem may be less the poop itself than the smorgasbord of other substances it frequently comes with, including feathers, heavy metals, bacteria, antibiotics, and bits of rodents. Jacobson also notes that the practice could promote the spread of mad cow disease.

Ground limestone: Strange as feeding rocks to cows may sound, limestone can be found in cattle troughs all over the United States. The stuff is a cheap source of calcium, and it also seems to promote growth. As one study put it, cows that ate limestone late in life “tended to have more desirable carcasses” than cows that didn’t.

Crab guts: For ranchers and feedlots near the coast, the guts and other undesirable parts of fish, crabs, shrimp, and crawfish can be an abundant source of cheap protein. Ground up into a tasty meal, seafood byproducts can be mixed into other feeds. Fish-meal cattle feed isn’t a new idea; Marco Polo observed in his diary that cows ate it “without any sign of dislike.”