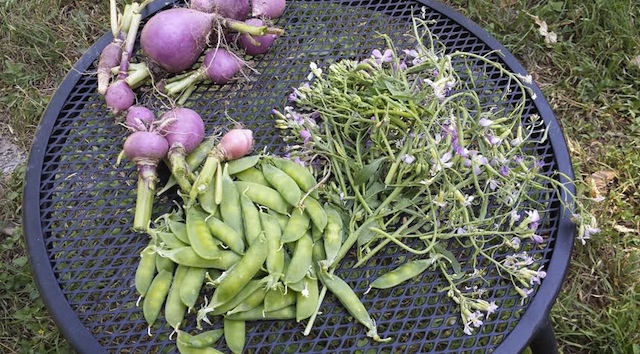 To garden is to accept chaos. Soil, seeds, weather, fauna—these are just a few factors that interact in complex and unpredictable ways, generating results we can influence but ultimately can’t control. Add the frailty of human judgment to the mix, and gardening is a kind of crapshoot. For the kitchen gardener, when the harvest disappoints, you have to react creatively—in short, to turn your errata into something delicious to eat.

This spring here in Austin, we planted snap peas too late. The tendrils gamely snaked their way up their trellises, but by the time the plants flowered, the weather had become too hot for the buds to set much in the way of fruit. Something similar happened with the radishes, planted on the same late date: They grew robust tops, but very few of them had sufficient time to develop full root bulbs before the heat set in. Harvesting them became a low-odds gamble: for every four you picked, just one presented a crunchy, spicy red orb. The other three showed a spindly root, which I would frog-march straight to the compost pile.

Well, not always. For a couple of weeks, the radish tops have been so green and healthy that I’ve been sautéing them like I do kale or chard. They cook fast and have a pungent flavor, easing the sting of the largely failed root harvest. Then the remaining  radish tops went to seed and sprouted pretty purple flowers. When I snapped off a bud and tasted it (in the garden as in the kitchen, one should Always Be Tasting), I found it peppery, reminiscent of mustard greens (a related plant) and tender. And so, another unexpected harvest—for several days, I’d go out to snip a few to add, chopped, to salads.

Finally this weekend, the time came to pull out the lingering spring garden, to make way for hot-weather crops. (I put in a second round of tomatoes, hot peppers, melons, and cucumbers.) As I uprooted the pea shoots, I noticed a few more remaining snap peas than I expected. I tasted one. It delivered a burst of sweetness and the bright flavor that I can only describe as “green”—the thing that makes sugar snap peas maybe the most beloved spring vegetable. The problem: The pod had become slightly wizened in the hot sun, a bit too fibrous and impossible to chew all the way. Nothing that a bit of cooking won’t fix, I noted as I snatched a couple of handfuls worth of delicious-but-tough snap peas out of the foliage.

Then I snipped all the remaining flowers from the radish plants before yanking them, too. Among the roots, I collected more keepers than I had expected. I immediately brought my motley treasure into the kitchen for a quick breakfast. (Note: these ingredients would also work well in a stir fry or a pasta.) Of course, you probably don’t have access to aged snap peas or radish flowers; but if you garden, I bet there are some exciting flavors lurking out there in odd places, waiting to be set free. 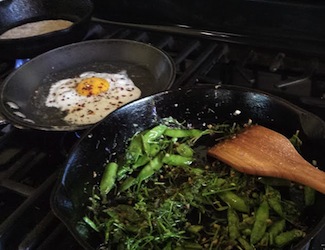 Heat a cast-iron or other heavy-bottomed skillet over medium flame. Add enough olive oil to cover the bottom and stir in the garlic, the chili pepper, a pinch of salt, and a grind of pepper. Stir for a minute, being careful not to let the garlic burn. Add the snap peas and toss, cooking them for a minute or two. Add the radish flowers. Cook, tossing and stirring, until the snap peas are tender (they should retain a decent crunch). Marvel at the interplay between the sweet peas and the mustardy radish flowers.

Meanwhile, place a small skillet over medium heat and add the butter. When it has melted, swirl the pan to coat. Let the pan get good and hot. Crack an egg and add it to the pan. Give it a dusting of salt, black pepper, and chile pepper. Turn heat to low and cook until whites are fully set. Flip the egg and cook to desired doneness (I like the yolk to be a little runny.

Meanwhile, heat the tortilla in yet another small skillet or comal (or over the open flame of a gas burner) over medium heat, flipping it to brown on both sides.

Assemble the taco: Slip the fried egg into the folded tortilla and enough of the radish-flower/snap pea mixture to fill it. Serve the remainder on the side. Garnish with the chopped radish.

P.S.: Happy 40th Anniversary to my beloved Watauga County Farmers’ Market on the opening of the new market season. I’m delighted the two young landless farmers who have joined Maverick Farms’ FIG Program were able to sell edible brassica flowers at their very first market—here’s hoping for a great 2014 season to all the High Country farmers, and welcome aboard Kathleen Petermann with Waxwing Farm and Caroline Hampton with Octopus Gardens!