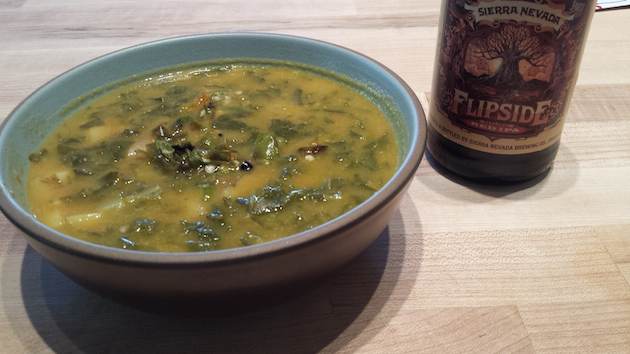 Back at Maverick Farms, we often have lots of potatoes and kale. And so a go-to dish there—especially when we’re feeding a crowd—is the classic Portuguese idea of combining those two staples into a simple soup called caldo verde. The authentic version includes the cured pork sausage known as chorizo. Pork, kale, and potatoes do indeed make a sublime combination, but at Maverick, we often go hippie and leave out the sausage.

Recently, when I found myself with a small bounty of kale, potatoes, and not much else, I knew what to do. I didn’t have any stock made, but no matter. Stock—meat-based or vegetable—adds body and richness to soups. But real talk: good old water works fine in a pinch, especially, as in this case, you use a vegetable purée as the base.

Even so, I made this soup just as laid out below and I found it missing one more element—I had adjusted salt, pepper, and given it a lashing of vinegar, and it still wanted something. Then I remembered I had a handful of shishito peppers in the back of the fridge. Shishitos—and their very similar cousin, padrones—are smallish frying peppers famed in Spain because about one in every eight of them is fiery hot (the rest are mild but quite flavorful). In Spain, they sauté shishitos in plenty of olive oil and then lash them with coarse salt—creating an addictive and Russian Roulette-like tapa (I love getting the spicy one.) To garnish this dish, I fried the shishitos as I normally would, chopped them coarsely, and garnished my soup with them. They filled the flavor void.

In a heavy-bottomed soup pot, turn heat to medium add a generous glug of olive oil (enough to cover the bottom, plus a little more). Sauté the onion, stirring occasionally, until it’s soft. Add the garlic, give it a few stirs, and add the carrots. Let the carrots sauté a few minutes, than add half of the potatoes and a good pinch of salt. Let the potatoes sauté for a minute, stirring to coat with oil, and then add half of the water. Turn the heat to high and bring the water to a boil. Cover, turn heat to low, and let simmer until the potatoes are soft.

If you have an immersion blender, now’s the time to use it to reduce this chunky concoction to a smooth purée. You can also accomplish this by dumping the contents of the pan into a blender. Take great care and start the whirring on the lowest speed possible and cover it tightly—hot liquids in the blender can be volatile.

Return to the purée to the pot along with the kale, the rest of the water, and a pinch of salt. Give it a stir, turn heat to medium, and cover. Cook until the kale has begun to wilt—about five minutes. Now add the other half of the potatoes, turn heat to low, and cook, covered, until the kale and the second round of potatoes are both tender. Add plenty of black pepper, a splash of lemon juice or vinegar, and taste. Add more salt, pepper, or vinegar if needed. Serve garnished with chopped, fried shishitos (see below). 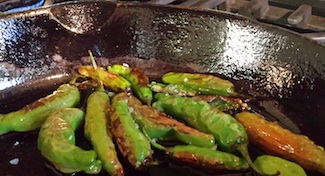 Things i like to see: shishito peppers sputtering in hot oil

Put a cast-iron or other heavy-bottomed skillet over medium heat, and add more than enough olive oil to cover the bottom. When the pan is hot—test by adding a drop of water to it; it should sizzle—and the peppers in a single layer. They should sizzle and sputter. When they have become browned and blistered on one side, carefully turn each one over with a tongs. Give them a vigorous sprinkle of sea salt at this stage. After the second side has browned, remove them onto a plate with a tongs, pausing for a second over the pan to let the oil drip from each one as you go. Consume half of the fried shishitos as soon as they’ve cooled enough to eat. For the other half, remove the stems and chop them coarsely.