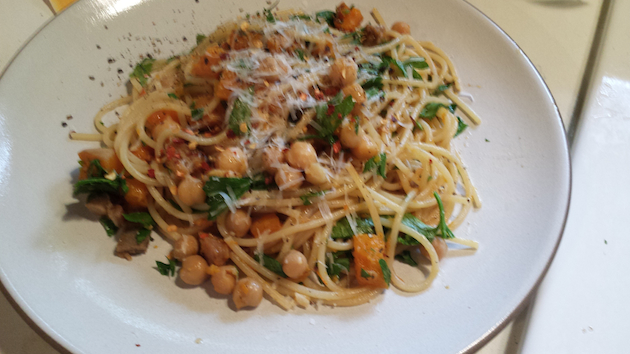 September in Austin is a bit like February in northern climes: months of harsh weather have turned the farmers market into a study in austerity. Here in Texas, tomatoes are mostly gone, done in by the unrelenting heat. Greens are as rare as rain. Eggplant, zucchini, and melons soldier on. And on.

A few weeks ago, one of my favorite vegetables began to appear at farm stands: butternut squash. The trouble was, the idea of whipping up—much less eating—a butternut squash soup on a 100+ degree day had all the appeal of sporting a down parka at a swimming hole.

At a recent Sunday farmers market, I broke down and bought one of the squashes anyway, desperate for new flavors. I figured I’d find something appealing to do with it. And then, fall—or at least a preview of it—arrived in the form of a day-long rainstorm. The temperature barely cracked 80 degrees: a veritable cold front! So I decided to combine that one butternut squash with a little slab of bacon I bought from the excellent Austin butcher Dai Due into an autumnal pasta.

To bring the sweet smokiness of the squash/bacon combination to the fore, I deployed an old Mark Bittman trick: I used half the amount of spaghetti that a typical recipe would call for. If you want to feed more people, you could get away with using a full pound of pasta. Just add additional lashings of olive oil and cheese to ramp up flavor. Substitution note: Try swapping the pasta for farro—see here for more on that excellent grain.

Preheat oven to 375 degrees. Place a large, oven-proof skillet—one big enough to hold the squash in one layer—over a medium flame. Add barely enough olive oil to cover the bottom of the skillet. When it’s hot, add the bacon and cook, stirring often, until brown and crisp. Remove with a slotted spoon and set aside, leaving the heat on.

Add the squash to the hot pan and gently toss until it’s sizzling and coated in fat. (If there isn’t enough fat left in the pan from cooking the bacon, add a bit of olive oil.) Add a small pinch of salt—go easy, because bacon is salty—and a generous grinding of pepper. Toss the squash one more time to make sure the pieces are laid out more or less in one layer.

Place the pan in the heated oven. Cook, tossing occasionally, until the squash is tender and lightly browned, 15 to 20 minutes.

Meanwhile, get the pasta going. (I use Harold McGhee’s low-water, high-speed method.)

When the squash is done, take the pan out of the oven and mix in the chopped garlic and crushed chili flakes. Let it sizzle for a minute or two, as the pan’s residual heat cooks the garlic. Now add the drained beans, a ladle of pasta water, the cooked bacon, a good grating of cheese, and toss it all together.

When the pasta is done, drain it and combine with the squash mixture. Add the chopped parsley, and toss until well combined. Taste for seasoning, adding salt, pepper, and chili flakes as needed. If the dish seems a little dry, add a glug of olive oil.

Pass around the block of cheese and the grater as you serve. This dish goes well with a sturdy red wine—maybe one from France’s Rhône region.