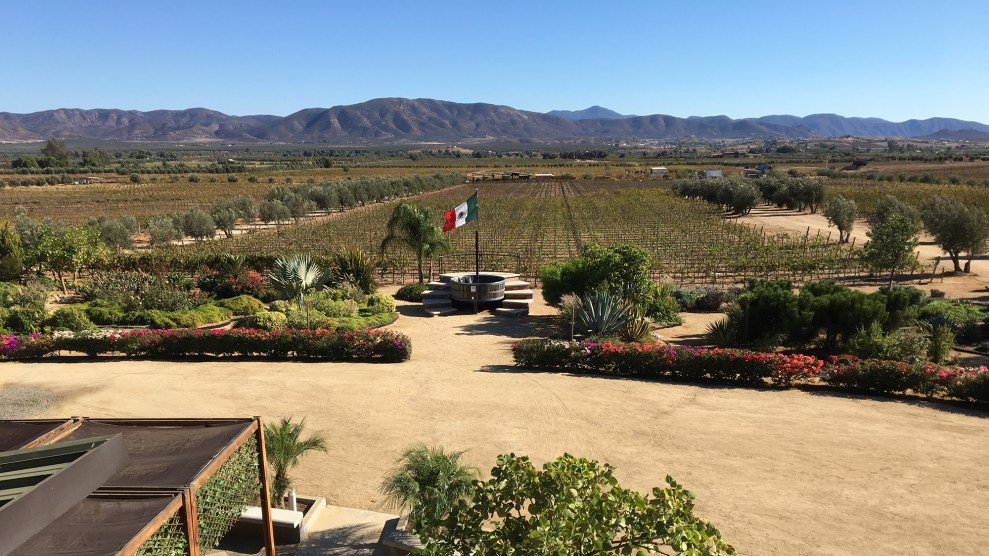 When you think booze in Mexico, tequila and limey beer probably come to mind. But the country is home to several wine regions and has been producing the drink since Spanish missionaries brought grapes to the New World in the 1500s. One wine valley in northern Baja California has entered the global stage in recent years: Its warm, dry air and rocky soil help winemakers in Valle de Guadalupe turn out red blends and rarer varietals known for their minerality.

“The characteristic of this region is this marine flavor—the breeze, this ocean influence, a little salinity, it’s something very particular that makes a strong personality of wines,” says Hugo d’Acosta, a winemaker and consultant in the valley, who you’ll hear from on this week’s episode of Bite.

“Some people love it, some people not necessarily,” d’Acosta adds. The first camp now includes the likes of esteemed chef Thomas Keller, of French Laundry fame, who featured “Amantes Mezcla” from the Valle’s Lechuza Vinyard on his wine list in 2013. The area now produces roughly 80 percent of all wine coming out of Mexico today and has become known for its experimentation and innovation—as vintner Gustavo González, who spends part of his year in Napa and the other part in Valle, put it to me: “Anything goes here.”

Until the 1990s, Valle’s wine production was confined to a few major producers who bought grapes from small farmers and mass-produced commercial wines. Now, the area houses more than 100 distinctive wineries scattered along its “Ruta del Vino.” How did this renaissance come about? D’Acosta, who’s sometimes referred to as the godfather of the valley, holds part of the key. Listen to Bite to discover the backstory.

As Valle de Guadalupe transformed into a tourist destination—the national thirst for wine has intensified, and Americans can easily make the two-hour drive down from San Diego—Michelin-starred chefs, expats, architects, and tourists have poured in. And with them have come boutique hotels, eclectic architectural experiments, dozens of gourmet restaurants, and Airbnbs. All the development comes at a cost: Residents of the semi-arid region worry that its precious groundwater is being over-tapped, an issue reporter Jackie Bryant explored in her 2016 piece for Roads & Kingdoms. “You can’t put a million straws in the same glass and expect to keep drawing water,” a local geophysicist told Bryant—”but that’s what everyone’s doing.”

In the 1990s, the start of the modern era of winemaking in Valle, growers in the region made careful water conservation plans, d’Acosta remembers. But foreign interests and the recent explosion of wineries and hotels mean added pressure, and those original rules aren’t always followed. “The big investors come in, and they are going to push, and I think they go faster than the capacity we have as locals to organize,” he says. As the saying goes, he adds, “you can kill the gallina de los huevos de oro (the hen with the golden eggs).”

Water woes aren’t the only concern. Natalia Badan, owner of Mogor Badan and a pioneer in organic farming in the region, worries the added tourism will rob her home of its rustic charm. The daughter of Swiss-French immigrants, Badan has lived on the Mogor Badan ranch since she was a girl. She continued her family’s tradition of growing wine grapes and her brother Antonio’s tradition of making critically acclaimed, French-inspired wine (he died in 2008). And in an organic, no-till garden, she grows the majority of the produce served in the ranch’s open-air restaurant. Chefs and tourists stop by Badan’s weekly farmer’s market for pomegranates and carrots, house-bottled olive oil, and chili-garlic sauces. Badan is grateful for the visitors. The challenge, she says, is to avoid becoming “too commercial, too superficial.”

A few kilometers away, Luis García and his wife, Amelia, manage the boulder-studded vineyard behind Vinisterra winery. They live with their three kids in a small, white house bordering the property’s back driveway, along with their daughters and dogs: Kika, all floppy curls, and Frida, a black mutt. Mendoza’s family migrated to Valle from Oaxaca in search of work 20 years ago. She met and married García after he arrived at Vinisterra as one of its bricklayers.

In time, García felt the call of the vines—he liked the idea of tending something living, rather than something inert, he tells me. A slight man, he sports a bracelet that reads “Vinos Mexicanos” on his wrist, and he is passionate, even sentimental about his connection to the plants, which he checks on every day of the week. “They’re living things that are telling you things,” he says.

In 2008, García decided to try his hand at making his own wine. “It was terrible,” he tells me. He tried three more times and was back at it again last year, with a Nebbiolo and Merlot blend. The juice is still aging, but he’s already picked out a name: Tal cual—meaning “as is.”