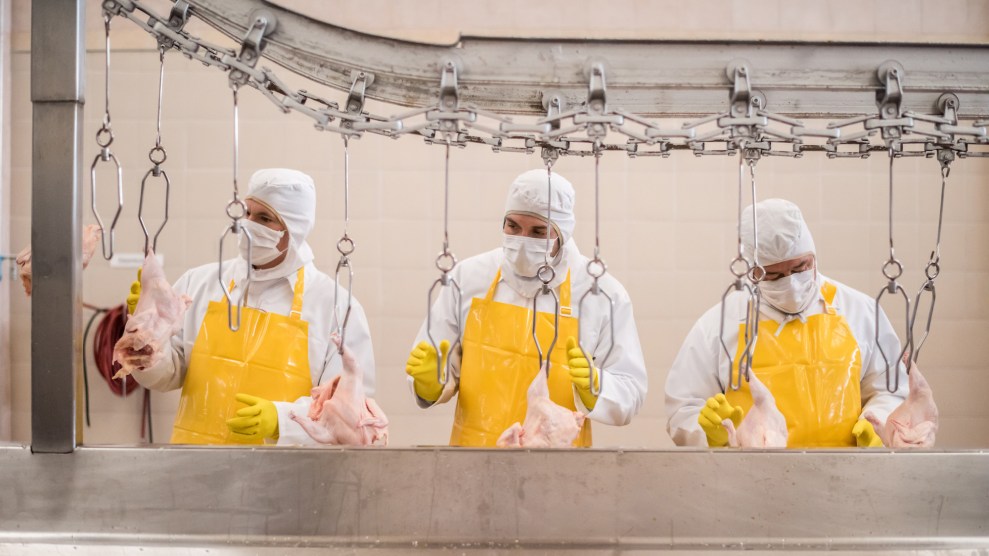 As the coronavirus ravages the country’s vast meatpacking facilities, infecting and killing workers and slowing production, US Health and Human Services Secretary Alex Azar has floated his interpretation of the catastrophe: It’s the workers’ fault.

On an April 28 call, Azar “told a bipartisan group that he believed infected employees were bringing the virus into processing plants where a rash of cases have killed at least 20 workers and forced nearly two-dozen plants to close,” Politico reported on May 7. (On May 8, the US Department of Agriculture announced that 14 of those plants would re-open, as a result of President Trump’s recent executive order invoking the Defense Production Act for meat production). Politico added:

Those infections, he said, were linked more to the “home and social” aspects of workers’ lives rather than the conditions inside the facilities, alarming some on the call who interpreted his remarks as faulting workers for the outbreaks.

The Politico article arrived on the heels of other eye-popping remarks from powerful politicians. During oral arguments before her court on May 5, Wisconsin Supreme Court Chief Justice Patience Roggensack downplayed an outbreak in Brown County, declaring that it involved meatpacking workers and not “the regular folks” of the area.

In a Fox News interview back in April, South Dakota Gov. Kristi Noem explained a massive outbreak at a Smithfield pork-packing facility like this: “We believe that 99 percent of what’s going on today wasn’t happening inside the facility. It was more at home where these employees were going home and spreading some of the virus because a lot of these folks that work at this plant live in the same community, the same building, sometimes in the same apartment.” In an interview with Buzzfeed, a Smithfield spokesperson expanded on this theory. Citing the plant’s “large immigrant population,” she explained that “living circumstances in certain cultures are different than they are with your traditional American family,” she explained

As the death and illness counts rise—nationwide, nearly 12,000 meat-packing and food-processing workers have tested positive for the illness, and 48 have died—expect such blame-the-victim rhetoric to continue. That’s because the 330,000 men and women who process the nearly 10 billion chickens, hogs, and cattle raised each year in the United States represent some of the most vulnerable segments of the population, and the very groups routinely stigmatized by the Trump-era GOP: people of color and immigrants.

The industry “recruits the most vulnerable workers as a business model and reaps the profits.”

In a 2019 report condemning working conditions in the meatpacking industry, Human Rights Watch documented just how much the industry relies on workers not seen as “regular folks” by common GOP wisdom. HRW noted that as much as a quarter of meatpacking workers are undocumented immigrants, and another quarter are African-Americans. The workforce also includes a substantial number of incarcerated people and refugees. In short, the report shows, the industry “recruits the most vulnerable workers as a business model and reaps the profits.”

The business model also gets a boost from light workplace safety regulation enforcement by federal authorities. The US Occupational Safety and Health Administration has “been unable to effectively exercise its statutory powers to investigate workplace conditions and issue penalties and orders for businesses that have not ensured a workplace that is free from recognized hazards that cause, or are likely to cause, death or serious physical harm,” the report found.

As a result, Human Rights Watch investigators found “alarmingly high rates of serious injury and chronic illness among workers at chicken, hog, and cattle slaughtering and processing plants, as well as business practices that endanger workers and obscure the reality of workplace hazards.” They concluded that for decades, “the US government has failed to implement domestic workplace safety and health standards that would regulate practices in the industry to the benefit of workers’ health and safety”—and that the situation had gotten worse under President Donald Trump.

When I spoke to poultry workers in Texas and Arkansas for an article last month, they expressed fear and anxiety over being exposed to the coronavirus at their crowded workplaces and bringing it home to their families. For a blockbuster article Mother Jones and FERN published last week, Esther Honig and Ted Genoways talked to workers in a beefpacking plant in Greeley, Colo., who described being “repeatedly pressured to just keep working, even if they were feeling ill or had been exposed to people who were.”

The Trump administration, meanwhile, has focused its efforts on keeping the kill lines moving. On April 29, the president issued an executive order declaring that the US Department of Agriculture “shall take all appropriate action” under the Defense Production Act “to ensure that meat and poultry processors continue operations.” In remarks to the press earlier that day, Trump explained the move as a push to protect large meatpacking firms from “liability”—a remark widely interpreted as meaning liability for failing to protect workers from coronavirus exposure. Instead, as Azar has made clear, it appears the administration will try its best to kick that liability back over to the people already dying at record rates from the virus: those with the least amount of power.