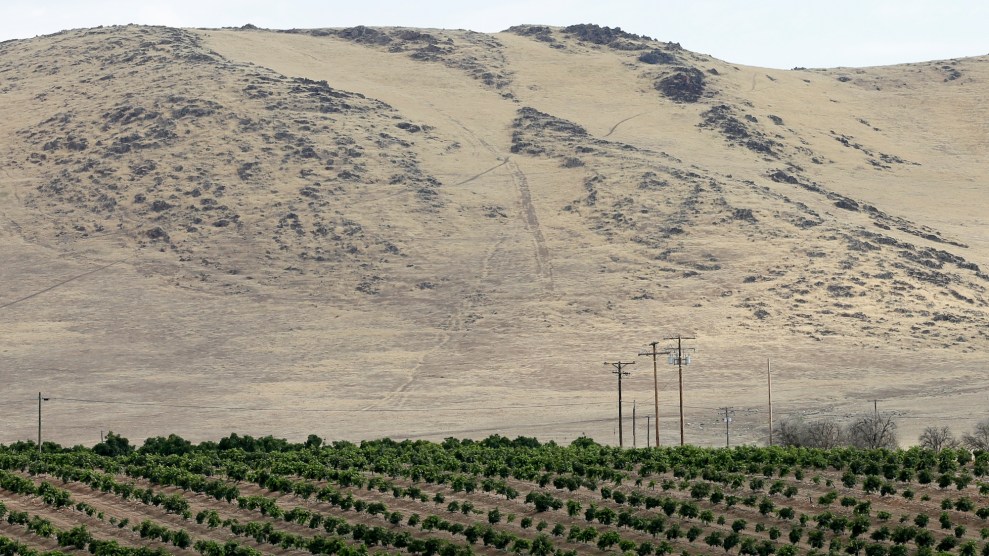 Groves of citrus trees sit below a barren hillside in Tulare County, outside of Porterville, Calif, in 2015. Gregory Bull/AP

Chances are, you’ll eat something grown in California today. Its farms churn out a third of US-grown vegetables and two-thirds of its fruits and nuts, and more milk than any other state. But as I’ve documented in many articles and in my 2020 book Perilous Bounty—released in paperback today, May 2—its water resources are dwindling, parched by climate change and a relentless expansion of thirsty nut groves.

Hot on the heels of the epochal 2011-2016 drought, the state has again descended into an even more extreme dry spell. This year marked the single “driest and among the warmest January to mid-April periods on record,” according to the eminent University of California, Los Angeles climatologist Daniel Swain. Alarming news, because that’s the very time frame when the state typically receives the bulk of its precipitation.

This year marked California’s single “driest and among the warmest January to mid-April periods on record.”

Where will we get our fruits and vegetables as California’s farms inevitably adapt to a hotter, drier new normal? The current drought isn’t likely to cause an imminent vegetable shortage—the state’s growers will scrape by siphoning water from ever-sinking aquifers. But they’re consuming what’s essentially a fossil resource, and at some point soon they’ll have to scale back.  In my book, I showed that despite the explosion in farmers markets and interest in “eating local” over the past 30 years, we still lean heavily on California for fresh food. I called for a national push to reduce our reliance on food grown in the Golden State by ramping up production in every other region of the country.

I discussed these ideas on the food-and-climate podcast Hot Farm, produced by the Food & Environment Reporting Network and hosted by Eve Abrams. The final episode took a close at a transformation in the Mississippi Delta. This region is traditionally dominated by crops like corn and soybeans, destined for livestock feed and biofuel plants, not your grocery cart.

Reporter Travis Lux teases out the story of Shawn Peebles, an eastern Arkansas farmer who saved his family land from bankruptcy by switching from those low-value commodities in 2009 and diving into organically grown sweet potatoes, edamame (fresh edible soybeans), melons, green beans, black-eyed peas, and more. He did it by scrapping, saving, and making relationships with big buyers like Costco who ensure him a steady market.

While Peebles serves as a hopeful success story, Lux makes clear that he’s a “trailblazer forging a new path,” and still just “one guy with one farm” in a region whose land remains dominated by non-food commodity crops. California still stocks the supermarket produce aisle in the Delta, just as it does everywhere else. Creating more Shawn Peebles—not just in his home region, but also other parts in the country that have been outsourcing their fresh produce production to California for decades—will require action from federal and regional policymakers: investments in long-vanished infrastructure for sorting and storing crops; the development of a labor force ready to tackle the skilled work of farming; the rise of retailers that can handle a more diverse and chaotic fresh-produce supply chain; and (not mentioned in the episode) some sort of land reform to open access to the next generation of farmers, now competing with well-heeled investors and developers for acreage. The Justice for Black Farmers Act, a stalled bill sponsored by Sen. Cory Booker (D.-N.J.), provides a blueprint for doing just that.

I finished the Hot Farm episode with a feeling much like the one I felt when I finished writing my book: a sense of hope and even optimism mixed with dread. Like all the economic transformations made necessary by accelerating climate change, revamping our food system to adapt to California’s grim water situation is going to be extremely difficult—but it’s also eminently possible.