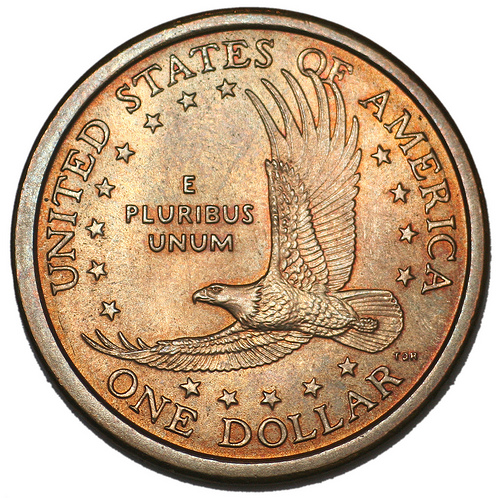 Picture this: Collecting dust in high-security vaults, unwanted by Congress and the American public, are more than a billion golden coins bearing the likenesses of famous politicians. Current lawmakers won’t discuss them. But if revealed to the public, the treasure trove could prove scandalous.

Sound like an airport pulp thriller? Nope—it’s just the latest embarrassing boondoggle to surface in Washington, exposed by the sharp folks at NPR.

They report today that more than a billion dollars in $1 coins—you know, those hefty golden coins that were meant to replace the dollar bill—are sitting around in Federal Reserve vaults doing, well, nothing of value. At a cost of $300 million to manufacture, the unused coins are the result of Congress’ repeated failures to wean American consumers off of paper dollar bills, which, according to the Government Accountability Office, would benefit the government to the tune of roughly $5.5 billion over three decades.

Vast quantities of these coins are in storage “with no perceivable benefit to the taxpayer,” the Fed told Congress in a report last year. Not only are these new coins wasting money, the Fed noted in the same report, but officials “have no reason to expect demand to improve.” Turns out we Americans like our crisp dollar bills just fine, thank you very much.

Here’s one scene I enjoyed, when NPR reporters visited a Fed vault storing these abandoned coins:

Inside one basementlike Federal Reserve vault in Baltimore, NPR was able to see 45 million $1 coins of various types. The coins were overflow from vaults elsewhere.

And despite a national indifference to the coins, they were heavily guarded.

A group of journalists from NPR passed through a metal detector and special secure doorway before reaching the inner entrance to the vault, a fence gate secured by two common Master padlocks.

You should listen to/read the story yourself. Then file it away in the Department of Destroying Confidence in Our Government.