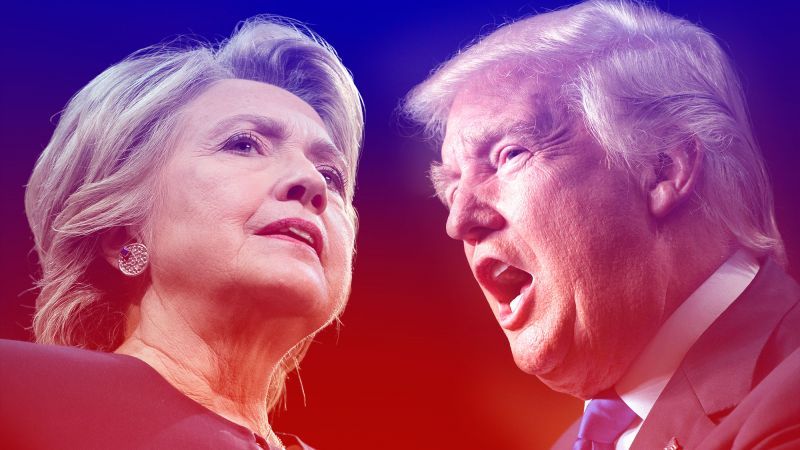 By normal standards, Trump was once again frenzied and hostile tonight. However, by Trump standards, he was surprisingly subdued. He had his moments, but not nearly as many as usual, and for most of the debate he managed to keep a level tone. I was joking about the Valium below, but I dunno. Maybe he really did get himself tranked before the debate.

I’m going to guess that the instant polls will show this one close to a draw. Maybe Clinton will come out a bit ahead. Basically, they both repeated the same attacks as they did in the first two debates, and they’ve lost some of their zest at this point. At about the 20-minute mark, Clinton started trying to bait Trump into melting down, but he generally resisted the temptation. Every time he started to get a little animated, it was like something blinked in his brain and he dialed himself back. He would have been more dangerous if he could have (a) dialed himself back even more, and (b) done this from the start.

Trump claimed, once again, that all the groping accusations are “pure fiction.” He never met any of those women. I guess that includes the People reporter, who he pretty clearly met many times. He also lied when he denied 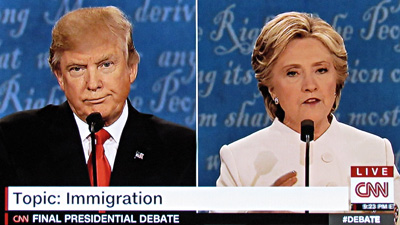 saying that he was OK with Japan having nuclear weapons. He lied again when he claimed, as usual, that he opposed the Iraq War.

In the news department, Trump was very clear that no, he would not necessarily accept the results of the election. “I will look at it at the time.,” he said. There’s just too much election fraud for him to commit to anything. This was by far the biggest actual news of the debate. On the other side of the aisle, Clinton said the Senate should confirm President Obama’s nominee to the Supreme Court. Has she said that before? Maybe so, but I don’t recall it. In any case, it was a very specific endorsement of Merrick Garland. Does that mean she’d renominate him if she wins?

Bottom line: by 2016 standards, this debate was a bit of a bore. It will have no effect on the election at all. However, Trump basically threatened to do—what? Well, something, anyway, if the election doesn’t go his way. This is not a normal threat for a presidential candidate to make, but luckily I doubt the election will be close enough for him to gin anything up. I also doubt that the Republican Party will back him up.

A complete transcript is here.

God in His infinite wisdom has declared that there should be ten commandments, nine forms of devotion, an eightfold path, seven deadly sins, six remembrances, five pillars of faith, four ages of man, and three presidential debates. Mere mortals can’t hope to comprehend why He would do this to us. Unless He’s a She and wants us all to get a good long look at Donald Trump and then get our act together. That’s probably it.

On with the show.

10:34 – Wallace: We all agreed not to have closing statements, but I’m going to ask you for one anyway.

10:31 – Trump: I’m going to grow the economy so much that we’ll have no need for entitlement reform. Now he’s off on a rant on Obamacare. Trump says he’s glad that premiums are going up.

10:27 – Let’s talk about the national debt. Why are both candidates ignoring it? Trump: I’ll get GDP growth up to 4%. Hell, maybe 5% or 6%. Why not? As soon as we get rid of the political hacks, anything is possible.

10:16 – Clinton calls out Trump for lying about his support for Iraq war. Mentions Celebrity Apprentice again.

10:14 – Trump now pretending he knows something about Mosul. Claims that ISIS leaders have already left because we announced attack three months ago. The whole battle is a sham to make Obama and Clinton look tough. The big winner will be Iran.

10:09 – Clinton: “This is very disturbing.” Whenever Trump loses something, he claims things have been rigged.

10:08 – Trump on Clinton: “She’s guilty of a very, very serious crime….She should never have been allowed to run for the presidency.”

10:05 – Trump is back on his schtick about how Hillary should have passed laws to stop him from doing all the sleazy stuff he does.

9:59 – Clinton (paraphrased): Trump is a creep. Trump: It was Clinton’s campaign that incited all the violence at his rallies.

9:57 – Trump on the groping accusations: “Those stories have been largely debunked.” I’m pretty sure the number that have been debunked is zero.

9:53 – Trump says he thinks the Clinton campaign got all those women to say he groped them. “It was all fiction.”

9:51 – Clinton: On the day I was in the Situation Room watching the raid on Osama bin Laden, Trump was hosting an episode of Celebrity Apprentice. 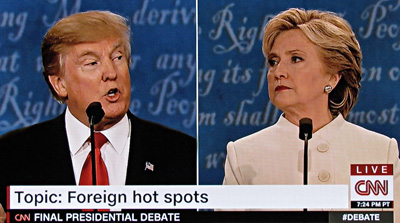 9:39 – Trump: “We’re going to do a lot of things about college tuition.” Like what? No telling, but it’ll be way better than Hillary’s lame tuition plan.

9:36 – Ah, excellent. The real Donald is back. He just denied saying he wouldn’t mind if Japan built its own nuclear weapons, even though he’s on tape saying exactly that.

9:32 – Trump: No one knows where the WikiLeaks stuff came from. Clinton: Intelligence agencies say it was Russia. Trump, sarcastically: “Yeah yeah, I get it.”

9:31 – Trump starting to get a little more red-faced now.

9:29 – Are you in favor of open borders? Clinton: I was only talking about energy. And that all came from WikiLeaks anyway. Trump should denounce Russian espionage.

9:26 – Now Clinton is attacking Trump, hoping to bait him into melting down. It’s bound to work eventually, isn’t it? Not yet, though. Maybe he took a Valium before coming onstage?

9:25 – Clinton: Trump met with president of Mexico and didn’t bring up the wall “He choked and then got into a Twitter war.”

9:13 – Now it’s all about protecting toddlers from guns. Clinton is considerably more moderate on gun control than she was during the primaries against Bernie Sanders.

9:10 – Trump: Court needs to uphold the 2nd Amendment. Oh, and all the other amendments too.

9:06 – Clinton: We need a court that respects women’s rights, LGBT rights, and opposes Citizens United. Court needs to stand up to the powerful. Senate should confirm Merrick Garland.

8:55 – None of the presidential candidates sent me birthday greetings today, so I don’t know who I’m going to vote for now. This is a real lost opportunity for Gary Johnson and Jill Stein.