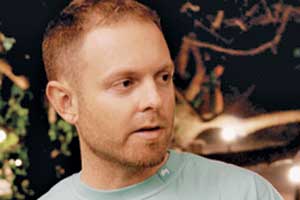 DJ Shadow is best known as a pioneer of hip hop sampling—his 1996 album Endtroducing… was recognized by the Guinness Book of World Records as the world’s first album composed entirely of samples. He’s also known for being in iTunes defector, having launched his own online music store where he sells his work. I talked to DJ Shadow about the store, his involvement with the video game DJ Hero, and where hip-hop is headed.

Mother Jones: Where did you get the idea to create your own digital download store, and what makes your store different from downloading music through sites like iTunes?

DJ Shadow: Initially, it was in response to the bootlegging that was going on of my stuff, and the confusion I saw. I wanted to start my own store so people would know that what they were buying was real. There were bootlegs around at the time that had my name on the cover, but the music had nothing to do with me. I’m not trying to compare myself to Hendrix, but back in the ’70s, there were some Hendrix bootlegs. If they just put his name on it, it would sell. And it didn’t even matter what was actually on the record. As for my store, most artists’ sites send you to a third-party storefront like iTunes, whereas we’re disseminating it ourselves. I was always uncomfortable with the thought of sending somebody who came to my site to buy something to some other store. It just occurred to me, “Why can’t we do this?”

MJ: So are you trying to compete with iTunes or kill it? And is it a political move?

DS: I wouldn’t say it was outwardly political. My problem with iTunes is that I don’t have any say in how I’m represented on the site. For instance, in certain cases I don’t want to sell tracks individually; I want to only sell the whole album. With simple things like that I just don’t get any response [from iTunes]. I don’t want to kill iTunes—I just want to offer my own retail experience in my own tiny corner of the Internet.

MJ: How do you feel about major labels?

DS: I’ve been on a major label for 14 years. I’ve always wanted as many people as possible to hear my music, and it definitely made sense for the majority of my career to be on a major label, on a distribution level, to be in people’s faces and be out there, and have access to major labels’ incredible machine, even though they have not understood or haven’t been invested in what I was doing. I always managed to fly a bit below the radar, but high enough to avoid colliding into anything. I don’t mind using them, and I’m sure they don’t mind using me, since I make them a lot of money. It’s mutually beneficial, so I’m not going to get on any anti-corporation soapbox to an extreme level.

MJ: Are there any other musicians who are following in your footsteps by creating their own stores?

DS: Plenty of indie artists sell their own downloads in their own stores, but the difference is that I am still on Universal, and I am still able to do this without sending people to another store, but I’m really not sure if that will inspire anybody else to do it. When I first pursued this with Universal, they had no idea what to do. But now that we’ve gone through the whole process and I’ve signed this 60-page document that says what we can and can’t do, I suppose it will be a little bit easier for the next person.

MJ: How did the idea for the game DJ Hero come about, and how did you get involved?

DS: Like a lot of other DJs, I‘ve been wondering when the first DJ game was going to happen. Somebody even pitched me on their own idea and I thought, “I’m not a video game startup; I don’t know what I’m supposed to do with this.” And then, a little bit less than a year ago, Activision reached out to me. I took a look at what they were working on and started brainstorming with them about music suggestions and concepts. That turned into them saying, “Hey, do you want to be a part of this? Can you do us a mix? Can you do us another mix? Can you do us four mixes?” So it all just kind of snowballed.

MJ: How does spinning on a video game compare to spinning in real life?

DS: Just like on Guitar Hero, there are things that are similar and things that are not similar at all. When I first played DJ Hero, I wasn’t very good. The control surface is similar in some ways to a turntable, but in other ways not at all the same. You can be a great DJ and still be not very good at DJ Hero. And vice-versa: You can have never spun in your life on real turntables and be fine on DJ Hero.

MJ: You have some aura of secrecy around yourself and your music. Do you think DJ Hero will change your level of fame?

DS: I don’t think it will do that as much as introduce me to a different age demographic. My core values are still the same about music, and my work ethic, and what I want to represent to people. I’m not going to be stepping out in bling suits anytime soon. Or talk shit to other DJs, or start beef, or any of that kind of stuff. People love drama, and if you aren’t really interested in perpetuating that, it keeps you from exploding on a mainstream stage. I’m totally fine with that.

MJ: Which DJs are you into right now?

DS: I still think that Qbert is the best turntablist, scratch turntablist. There’s any number of DJs who have inspired me over the years. I don’t actively go out in clubs, so I can’t tell you if there’s some hot new talent out there who everybody’s aware of but I’m not. But other influences who I would name, and who never get enough recognition, are DJ Too Tuff from Philly and DJ Man from Miami.

DS: That’s not the exact figure, but it’s somewhere in that range.

MJ: How do you see hip-hop changing in the next 10 years?

DS: I don’t know about the next 10 years, but in the short term, there seems to be an opening for a return to, for lack of a better term, more soulful sensibilities. Because everything right now tends to be the same and very aggressive, and I think people are getting a little burned out on it.