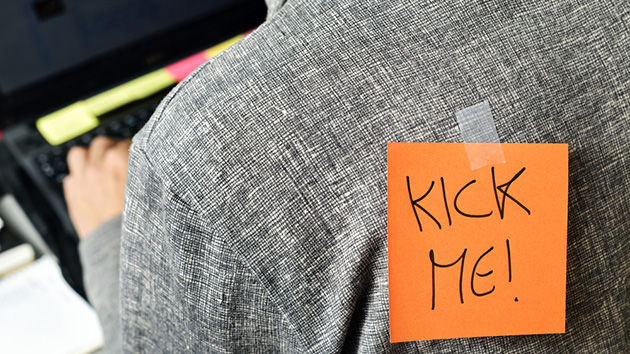 Click here for the NSFW version of this photo.nito/Shutterstock

WHAT’S A GOOD PRANK worth? How about $2 billion? That’s how much Dow Chemical’s stock value dipped in just 23 minutes on the morning of December 3, 2004, after its spokesman went on the BBC to announce that the company would make amends for the 1984 Bhopal toxic-gas disaster “simply because it’s the right thing to do.” (Dow had acquired Union Carbide, the original owner of the Bhopal chemical plant, in 1999.) Within the hour, the flack was exposed as one of the Yes Men, a duo that’s spent the past decade perfecting the art of anti-corporate trickery. The feat cemented their reputation as the world’s preeminent political pranksters (a reputation they recently reaffirmed by pranking the US Chamber of Commerce). It also proved that a punch line can occasionally pack a real punch.

The Bhopal stunt kicks off the pair’s new film, The Yes Men Fix the World, the follow-up to their self-titled 2004 movie. But don’t let the puffed-up title fool you into thinking that the Yes Men believe their hijinks are actually making the world a better place. A better title would have been The Prank Is Dead.

The exploits documented in both films follow the same basic script: First, the Yes Men create false identities and silly names; then they infiltrate conference halls and banquet rooms where they unveil Swiftian PowerPoint presentations and ludicrous inventions meant to expose the foibles of free-market capitalism. Posing as McDonald’s reps, they’ve suggested making fast food from human excrement. They’ve passed out samples of ExxonMobil’s new, corpse-based renewable fuel. While posing as WTO spokesman Hank Hardy Unruh at a textile conference, Yes Man No. 1 Andy Bichlbaum tore off his business attire to reveal the “Management Leisure Suit,” a skintight gold bodysuit with an inflatable three-foot phallus. Their victims are usually too dumbfounded or clueless to object. (The Chamber of Commerce being a notable exception: After the Yes Men held a press conference this October where they announced that the business lobby was making a dramatic about-face on its climate change policy, the Chamber discarded savvy PR strategy and sued the Yes Men for trademark infringement, unfair competition, and false advertising.)

Pranks have “become so ubiquitous that it’s become harder for what’s really meaningful to stand out,” says Joey Skaggs. “The bar has been lowered.”

While the first Yes Men movie was animated by an impish exuberance—Can you believe we keep getting away with this?—the latest is pervaded by a sense of self-loathing. After unveiling the Halliburton SurvivaBall—a “gated community for one” that turns the wearer into a giant beige gumball—to a roomful of insurance managers, Yes Man No. 2 Mike Bonanno laments, “Instead of freaking out, they just took our business cards. Our effort had been a failure. And come to think of it, all of our efforts had been failures…Maybe making fun of stupid ideas was a stupid idea.” After playing the fool for so long, the Yes Men have come to suspect that they’ve become fools themselves.

Actually, they’ve become entertainers. In the five years since The Yes Men came out, pranks have morphed from an outlet for political and artistic outsiders into another form of popular amusement, from Borat and Brüno to Punk’d and Pranked. Beyond the realm of celebrity spoofs, big budgets, and seamless editing, the internet has further democratized the practical joke, at least in its most sophomoric form: YouTube hosts more than 500,000 prank videos ranging from crank calls and friends humiliating drunken friends to the ongoing “prank war” between the CollegeHumor.com guys. For more inspired fare, you can easily lose an hour engrossed in the antics of Improv Everywhere, a New York-based group that orchestrates elaborate flash-mob “missions,” including pants-free commutes and “freezes” in which hundreds of people stop dead in their tracks in a public place for a few minutes. Joining the fun is as easy as Rickrolling your closest friends.

“Everyone’s become a prankster,” says Joey Skaggs, a veteran hoaxster who’s spent more than four decades coming up with clever ways to con gullible journalists, including—it must be said—us. In 2000, Mother Jones published an item about a proposed cemetery-cum-amusement park that turned out to be a Skaggs spoof. Skaggs, who tracks the field on artoftheprank.com, says he doesn’t mind the competition, but complains that quantity hasn’t been matched by quality. Pranks have “become so ubiquitous that it’s become harder for what’s really meaningful to stand out,” he says. “The bar has been lowered.”

In Skaggs’ view, any prank worth paying attention to is inherently subversive. Yet most of whom the Wall Street Journal has dubbed “the new pranksters” have little agenda beyond yucks—and bucks. Charlie Todd, the 30-year-old creator of Improv Everywhere, is adamant that the sole purpose of his happenings is “spreading chaos and joy.” The emperor has no clothes, so why not let him ride the subway, too? The hipster impresario recently started offering himself to advertisers as a prankster for hire. In June 2008, Todd staged one of his signature freezes as part of a viral marketing campaign for Taco Bell’s Frutista Freeze, and he’s since signed a sponsorship deal with Yahoo.

Attention, rather than intention, also drives the new crop of political pranksters. Take Martin Eisenstadt, a pseudonymous pundit who set up a phony conservative think tank and made the rounds during the 2008 election cycle. Posing as a McCain aide, he took in a Mother Jones reporter who briefly bought his claim that the candidate supported building a casino in Baghdad. But his biggest coup was pretending to be the source of Fox News’ postelection report that Sarah Palin thought Africa was a country, not a continent. This false claim inadvertently allowed Palin to denounce the original story as a hoax, even as the reporter stood by it. Eisenstadt is, of course, concluding his 15 minutes of fame with a new book, I Am Martin Eisenstadt.

The internet has further democratized the practical joke, at least in its most sophomoric form.

One reason that Yes Men wannabes like Eisenstadt seem so lame is that they’re competing with the likes of Jon Stewart, Stephen Colbert, and The Onion. Satirists shouldn’t be confused with pranksters, but the most trusted names in fake news (and their many imitators) have further mainstreamed the prankish aesthetic. But in doing so, they’ve lost the element of surprise, an essential ingredient of any effective prank. Even if you view the rise of this parallel media universe as a slo-mo prank of sorts, now everyone’s in on the joke. The audience tunes in to get their media-weary worldview humorously confirmed, and even politicians who were once conned by Ali G now line up to appear on The Daily Show.

And political pranks are no longer solely the domain of snarky liberals. Barack Obama’s victory has spawned an army of conservative No Men spewing accusations about birth certificates and death panels, inquiring about the executive foreskin, and making the inflammatory assertion that the president is just another guy with a weird name pulling off a clever feat of impersonation. Though it isn’t intended to be funny, this campaign of “saturation bullshitting” (as one of Kevin Drum’s readers put it perfectly) comes straight from the playbook used by Skaggs and the Yes Men. The haters have once again shown that the greatest hoax is how nonsense can be peddled with a straight face—and how the media are willing to spread the lies far and wide within hours, yet take weeks to debunk them.

Faced with this political theater of the absurd and prank overload, what’s an honest prankster to do? Reached at his office at Parsons school of design, where he holds the title of assistant professor in subversion (no joke), Andy Bichlbaum says he’s not throwing in the gold jumpsuit quite yet, just reevaluating the limitations of the prank. Sure, the Bhopal gag scored a PR hit, but it was a mere blip in Dow’s overall performance, and the company still refuses to take responsibility. “Okay, we got 600 articles in the US press to be written about the situation in Bhopal,” Bichlbaum says. “But how do you make things change systematically?” He and Bonanno have come to see that some issues—like climate change—are too big and complex for a couple of scruffy guys in cheap suits to take on alone, but “it’s not like we’re going to stop doing what we’ve been doing. It’s what we’re good at; we’re not good at organizing millions of people.”

The Yes Men have realized what Abbie Hoffman, the godfather of the modern political put-on, figured out long ago: The best practical jokes are primarily triumphs of spectacle. Witness the legendary 1967 stunt in which he and a band of Yippies rained dollar bills onto the floor of the New York Stock Exchange. A few traders scrambled for the cash—but Hoffman saw that the real impact was psychic: “In the minds of millions of teenagers the stock market had just crashed.” And if his political pranks simply amused people, so be it. “You don’t turn up your noses at entertainment because entertainment is way up there on the hierarchy of needs.”

We need pranks—weighty and lightweight—now more than ever. In Capitalism: A Love Story, populist prankster Michael Moore wanders Wall Street with empty sacks to retrieve federal bailout money. It’s a biting, timely reversal of Hoffman’s stock exchange gag, but unlikely to leave audiences demanding “pitchforks and torches,” as Moore has suggested. Pranks can provide sudden jolts of awareness or catharsis, but we shouldn’t expect them to both mock and mend the world. Nor should we worry about being LOLed into complacency by mindless pranks. Good pranks aren’t dead, simply evolving. Just as Sacha Baron Cohen’s first three personas have gotten stale and the Yes Men are searching for a new gig, so will the current crop of predictable pranksters be pushed aside by a new batch of jokers who’ve concluded that it’s better to light a stink bomb than curse the darkness.