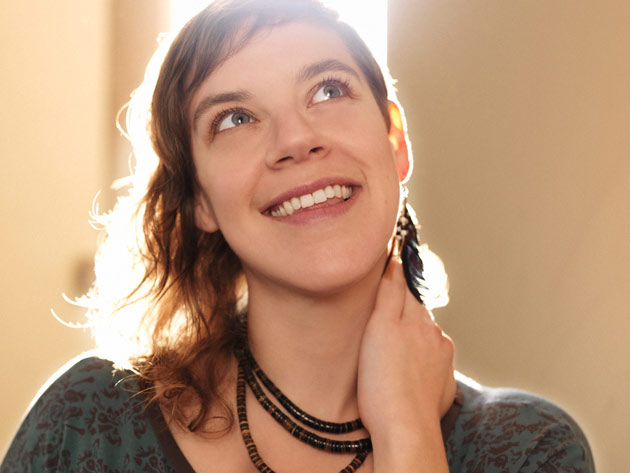 Merrill Garbus, the 33-year-old embodiment of the musical sensation and copy editor’s nightmare known as tUnE-yArDs, arrives for our interview at an Oakland café clad in a cacophony of black, hot pink, and bright green. A highlighter-yellow scarf is thrown haphazardly about her neck. Her signature asymmetric hairdo is somehow chaotic and totally deliberate at the same time. Her smile is huge, her voice booming, her vibe effortlessly effusive.

It’s all in a day’s work for Garbus, who burst onto the indie-pop scene in 2009, upending the status quo in a genre whose performers seldom stray far from established boundaries of cool: tUnE-yArDs’ scratchy self-recorded debut, BiRd-BrAiNs, featured a solo Garbus banging drums, picking on her uke, and weaving quirky harmonies from her immensely versatile voice by means of a looping device. Impressed, the Pixies’ old label, 4AD, reissued a vinyl version and signed her up for the next album. She moved to Oakland from Montreal, recruited a kindred spirit, bassist Nate Brenner, to round out her sound, and then proceeded to tear up every rule in the book.

In tUnE-yArDs, music meets performance art; Garbus combines face paint, homemade costumes, African-influenced beats and melodies, and in-your-face physical elements to raw, rapturous effect: Take the video for her song “Bizness,” off 2011’s w h o k i l l, wherein Garbus and a troupe of look-alike dancers twist and contort grotesquely like grown children feigning insanity or ecstasy. “What drove me with tUnE-yArDs,” she explains, “is I wasn’t seeing women aside from like Peaches or Ani DiFranco pushing the boundaries of what it is to be an acceptable female pop star. There’s just not a lot of examples of rad women being loud.”

Garbus was raised in Connecticut by folk-musician parents before heading off to women-only Smith College in Massachusetts. Given the awkwardness of high school—”sexual roles just never really made sense to me at all”—Smith was a welcome haven. For a time, Garbus studied abroad in Kenya, where she initially proposed tailing Somali pirates. Instead, her professors wisely redirected her toward the region’s Taarab music, which is based on Swahili poetry. But it was the ubiquitous Congolese pop blasting from Kenyan radios that proved to be most influential.

“I think a lot of what I picked up in my time there was just listening to all this music all the time that my ears had never heard before,” she says. But wherever her influences stem from, Garbus’ pop sensibilities often harbor a tone of charged, if subtle, politics. “Policemen shot my baby crossing right over my doorstep…Don’t tell me the cops are right in a wrong like this,” she intones in “Doorstep.” “Part of my experience as a human being is questioning my role in the world,” she explains. “So I guess to separate political music from apolitical music seems absurd to me.”

Garbus will be touring in the United States and overseas through August before returning home to start work on tUnE-yArDs’ third album. Given her general attitude toward her art, it is unlikely to disappoint. “If it’s not breaking some kind of ground,” she tells me, “it just seems pointless.”

Go to page 2 to read my Q&A with tUnE-yArDs.

At the time I sat down with Garbus, she was super-excited about her then-upcoming one-off performance at San Francisco’s Castro Theater, where she’d be scoring four Buster Keaton shorts with tunes of her own creation. (See Alyssa Battistoni’s review of this once-in-a-lifetime experience.) Here she fills us in on what first got her into silent films, her obsession with studying pirates, and why she strives to be rad and loud.

Mother Jones: So, do you have to watching the Keaton shorts like a million times as you compose?

Merrill Garbus: Yeah, and that’s actually been the best part of it. A lot of them are almost surrealist in what happens. There are a couple with Fatty Arbuckle, who was a silent movie comic actor in the teens and ’20s. He’s just the biggest, like, gluttonous, comedic, willing-to-do-anything-silly-with-his-body kind of guy, so the films end up being totally surreal from one scene to the next. Watching him is like watching children playing on a playground and then making a movie of it.

MJ: Did you study film in college?

“I never felt good about making art for my own sake; that kind of spacey, self-satisfied artist vibe was never what I wanted.”

MG: Just a little bit. I had a lovely liberal-arts college upbringing, which really means I took a lot of little snippets of a lot of things. I studied theater as the overarching theme of my study there, and at one point I actually did a slapstick version of Waiting for Godot. So when I started the Keaton project, I thought, “There’s no way I’m just going to play tUnE-yArDs songs—I have to serve these films!”; But now, in retrospect, I’m like, “Dude, what they were probably asking me to do was just play tUnE-yArDs songs!” I’m collaborating with Ava Mendoza on the whole thing and so I have someone else’s palate of sounds. But man, it’s been so much work.

MJ: Was going to an all-girls college pretty formative for you?

MG: Totally! There was a lot there that formed me. It was really intensely rigorous and intellectual, and everyone was a level of smart that I just hadn’t really been around, especially in that quantity of people. And it was especially formative coming from high school, where gender roles and sexual roles just never really made sense to me at all. Starting at Smith was like suddenly coming into a place where everybody was just a little bit more like me just by virtue of their gender. And I think it was a shock afterwards that I came out into a still-patriarchal society. But I think that it’s really worthwhile to see that there are certain dynamics that can exist, and there isn’t any glass ceiling—there is no ceiling!

MJ: During college you studied in Kenya. Did you go there looking to study music?

MG: I had never really thought that music was something worthwhile to be studying, and I actually initially had a plan to be there studying pirates. Yes, really—pirates! It sounds so crazy now, but I was pretty delirious at the time, possibly from the anti-malarial medication. I thought that I would go live in a Baobab tree, or camp out on a sailboat and study Somali pirates. My professors were like, “This is a terrible idea!” But I thought I could still interview people about their experiences. And then I realized these were people that the community feared more than anything else, and they probably weren’t just gonna open up and tell me all about themselves. Up to this point I had just played folk music, and I had brought my fiddle with me. I had bought a really inexpensive one so that the humidity wouldn’t totally fuck up a nice instrument, and that was the instrument that I played the most while I was there. But it was some of my professors who were there who saw this and were like, “Why don’t you study music?”

“There’s just not a lot of examples of rad women being loud…The truth is that a lot of them are freakin’ running the world behind the scenes.”

MJ: Did the music there have a big effect on the kind of music you make now?

MG: People attempt to draw a connection between my music and my time in Kenya, but I think that line is very dotted and very circuitous. My parents met in New York playing square dances in the ’70s, and there’s just always been the sense for me that music is around—it’s just part of your life. And I think that at a certain point I realized that it was a part of my life that I could pursue as a career, instead of it just being a hobby that I did on the side. But I definitely listened to so much music while I was in Africa. Really what influenced me more than anything was the Congolese pop music that was on the radio everywhere, and it was just so crazy to me how this one style of music coming out of the center of Africa really emanated outward. And that’s a music that still has really influenced me stylistically.

MJ: Your music often tends to have an undertone of political and social questioning—if not direct political statements.

MG: I guess I feel unable to separate myself from what people might call “political” or “social issues.” I question all the time, why do art? You’re not a doctor, you’re not a social activist necessarily, you’re not helping people directly. I’m still asking those questions—I don’t know what the answers are. But, I never felt good about just making art for my own sake; that kind of spacey, self-satisfied artist vibe was never what I wanted. I guess all I can do is offer my questions out to other people who might be asking the same questions, or even people who need to be reminded to ask questions once in a while.

MJ: How do you feel about being pretty singular in the pop music scene in that way?

MG: What drove me with tUnE-yArDs was that I was hearing a lot of “creative” pop music, but for the most part I was hearing pretty boring stuff that didn’t move me to dance or to feel. There’s just not a lot of examples of rad women being loud. Going to Smith it was like, “Wow, there are tons of women like this!” And the truth is that a lot of them are freakin’ running the world behind the scenes. And so when I get into heavy self-doubt, I remind myself that there aren’t that many people doing what I’m doing; I tell myself, “Okay, just show your face, do your thing, fill that role.”