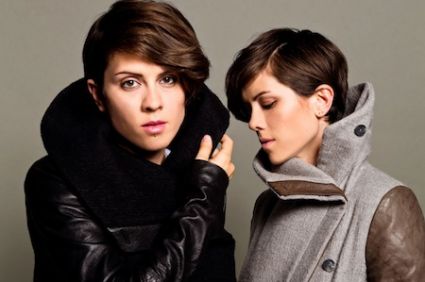 When Indie rock twins Tegan and Sara launch into the first single off their new record at Austin City Limits music festival, the audience gets quiet. Really quiet. Many of the fans sweltering under the Texas sun are here to see Tegan and Sara do what they do best: crank out angsty songs on acoustic guitar, with lyrics about jealousy, break-ups, and hating yourself.

But this new song, “Closer” (off their upcoming album, Heartthrob), has a beat that wouldn’t be out of place on a Ke$ha chart-topper—fitting, given that one of the album’s producers, Greg Kurstin, has also worked for the glittery pop star. Hearing “Closer” is a little like ordering hard cider and getting pink lemonade with whipped cream instead. The duo was advised by their producers to “not baby their old fans,” and the single is proof that Tegan and Sara are taking that to heart.

But never fear, traditionalists: “Now I’m All Messed Up,” also on the upcoming CD, hits that magical sweet spot where a band beloved for one sound takes a risk and kills it. Over an infectious beat, the chorus is still doused with plenty of pain: Go, Go, Go, If You Want, I Can’t Stop You.

My guess? Those old fans won’t be going anywhere.

I caught up with Tegan and Sara before their set to chat about the new album coming out in January, American politics (the sisters are Canadian), and being girl rockers in a male-dominated world.

Mother Jones: So you’re old pros on the festival circuit now. (Tegan and Sara have played Austin City Limits twice and South by Southwest at least five times.) Do you have any preshow rituals?

Sara: Lately, we’ve been listening to Always [by Erasure]—do you remember that song from the ’90s? (Tegan sings: “Always, I want to be with you.”) For whatever reason, we get a kick out of playing that lately. But we just try to get the band together, have what we call quiet time. We do our warm up and synch in with each other. I know a lot of bands that do shots! Or headstands! Or five-part harmonies! We’re sort of shy, we just say: Let’s go a play show now.

MJ: You hired some very well-known producers on this record—why did you decide to work with them?

Tegan: Greg Kurstin was the first producer I met with [out of about 15] and his response to a few of the demos I played him was really cool. Like all the producers we work with, he wasn’t necessarily interested in protecting and preserving what used to be, he was about pushing us forward. He ended up doing eight tracks, which is just a blessing. It made the record feel really cohesive. Justin Meldal-Johnsen of M83 and Paramore is the other producer we worked with. Again, incredible person, intense energy, and always thinking forward.

MJ: You’re known for a particular sound—is there anything on this album for those fans?

Sara: I think there’s a fan base for every band that really likes one specific thing that a band does. I totally get it. I love Bruce Springsteen and no record is ever going to be as good to me as Nebraska. But I don’t want Springsteen to only ever make a four-track record and sing acoustically. I think for us and our sanity and our artistic growth, we had to change. The whole goal is to make new fans and hopefully keep as many as the older fans as possible. You have to be like a lizard: Shed to gain more.

“Sara and I feel that without ever opening our mouths we’re already making a political statement.”

MJ: So you’re going on tour with the Killers and the Black Keys this fall—what’s it like playing with dudes all the time?

Tegan: We’re pretty open about the fact that it’s a serious “brodeo” out there. We definitely feel that, wow, there’s a sea of white, privileged middle-class men around us all the time. But we also feel there’s lots of diversity in our audience. In general Sara and I feel that without ever opening our mouths we’re already making a political statement because we’re writing our songs, we’re coproducing our records, we’re playing our instruments, and we’ve been doing it for a very long time.

MJ: Any thoughts about the upcoming US election?

Sara: We’re Canadian, so we’re voting emotionally. For me the biggest issue right now is a women’s right to choose. America is setting a tone culturally and socially, and we’re going backwards at this point. Fiscally, I could probably argue a lot with a Democrat. There are a lot of things with fiscal policy where I don’t agree with the Democrats, but when it comes to women’s rights, there’s no gray area.

Tegan: When I watch the debates or read the news, I just feel sad. I do think of America like a second home, and it doesn’t seem to matter if GOP or Democrats are in power, it feels like all they care about is undoing the other side. It’s not about people, it’s not about health care, it’s not about rights, it’s not about education—they’re just out there pulling our strings. We’re preparing for the worst.