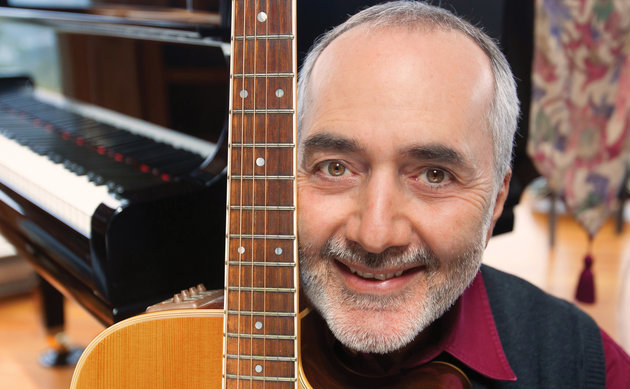 Four little words and I was instantly transported. Raffi might very well be the first person outside my family whom I truly adored. Now he was talking to me on the phone. A real phone! Not a banana phone.

I was part of a generation who grew up with Raffi songs. Because of Raffi we wonder what we might see down by the bay where the watermelon grows. We know the solution to sillies is to shake them out. We found out we liked to ate, ite, ute, and eat eeples and baneenees. And, of course, we learned all about our favorite whale, Baby Beluga. There are a lot of us.

“You are one of millions of what I call Beluga Grads,” he told me. “There are apparently between 20 and 50 million, depending on how you count it.”

If my fellow grads were anything like me, Raffi was the remedy for childhood problems, from skinned knees to boring car rides. He kept us company during restless nap times and was the mediator in shouting matches with siblings. An entertainer and a friend, his sing-along lessons were musical memories that defined my childhood.

So when I learned that, after a decade hiatus he was releasing a full album of new children’s songs, I couldn’t wait to learn more. His latest, Love Bug, continues Raffi’s rich musical tradition, combining musical depth with content little kids can relate to. He utilizes a vast range of musical styles: Minor melodies and acapella harmonies are sprinkled among upbeat folk and reggae songs. One track is simply wind chimes. Each song contains a message or a new lesson—and in 16 tracks, Raffi covers a lot. “Mama Loves It” makes it fun to help out with the chores. “In The Real World” emphasizes the importance of personal connections. There’s an ode to Pete Seeger—a new version of “This Land Is Your Land”—and a song called “Turn This World Around” honoring Nelson Mandela.

“Music not only gets our toes tapping, it taps our hearts,” Raffi says. “It moves us to our core. You think of the importance of music in selling things—in advertising—there are jingles all over the place. And believe me, advertisers would not use jingles if they didn’t work. So, you might say to yourself, well, that’s interesting. Why don’t we use music more to sell ideas? In fact, I believe I do that.”

In the market of ideas Raffi puts his money where his mouth is. His music is a reflection of his advocacy efforts and actions. He’s been really busy over the past 12 years: He founded the Centre for Child Honouring, a “communications hub and training ground for global awareness” whose philosophy is aimed at creating “sustainable, peace-making cultures.” He edited a book on said philosophy, Child Honouring: How To Turn This World Around,” with a foreword by the Dalai Lama. He co-founded the Red Hood Project—which highlights online security for children and combats online bullying and harassment—and penned his own book, Lightweb Darkweb: Three Reasons to Reform Social Media Before it Re-forms Us. He has also deployed advocacy and music to raise awareness about the environment—although he sees no distinction between the two.

“To me there is no such thing as the term The Environment,” he says. “What there is, is where we live—this living organism that feeds us, that births us. Sustainability is not just about air, water, and soil, as important as those are. I offer the nine child-honoring principles as a code of conduct that we can embrace, as a compass we can hold. It’s a way of being that holds culture and planet in the same hand. Interconnected. Love of oneself, of one’s mother, father, one’s mother planet. These things, in my mind and in my heart, all go together. What we want is a unified reverence for creation, for the family of life of which we are a part.”

Over his 38-year career Raffi has remained consistent in his messages and lives by example. He has never endorsed a product, and he has turned down commercial television opportunities. Though the world has changed a lot in that time, he is confident that children will respond to his music as they always have: with enthusiasm and joy.

“I think Love Bug, the CD and the idea, represents an opportunity for all of us to again marvel in the wonder of the fact that each of us is born with innate love. This is not a small thing. It is our saving grace as a species because we also have our dark side. That is why it is so important to be grounded in love, to be seen by our caregivers as the loveable beings that we are. And it has to be a respectful love. I think every artist aspires to express love in a new way in their time. I seek to continually do that. That is such an important thing. Because whether you are thinking about trouble in other places—such as in the Middle East currently, the terrible situation—or the gun violence that we keep hearing about, we have to keep coming back to that wellspring and keep building on that. Love is the strongest force there is.”

My conversation with Raffi was coming to a close. Before we hung up, he spoke of his heroes, Pete Seeger, Nelson Mandela, and Maya Angelou, reflecting that we should carry their wisdom with us. He ended with a hypothetical hug. “With all the love in my heart, I hug my audience and my potential audience.”

Much like he carries his heroes with him, I was grateful to take Raffi’s words with me. As they did when I was a child, Raffi’s lessons still carry a magic and a message. For that—then and now—all I can say is “Thanks, Raffi. Thanks a lot.”