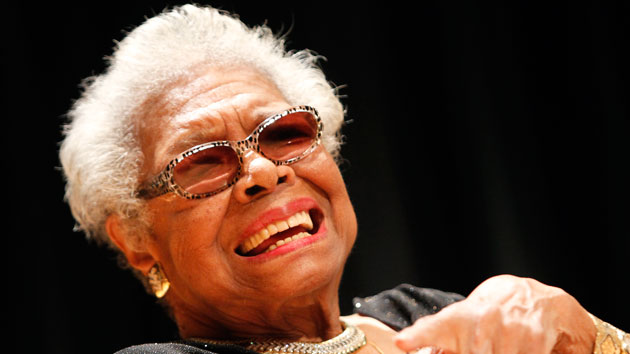 Maya Angelou, acclaimed poet, author, and civil rights activist, died Wednesday at the age of 86. Mother Jones had the opportunity to interview Angelou almost 20 years ago. Our reporter, Ken Kelley, wrote that she “speaks in the lilting cadence of the dancer she was trained to be. She moves with the sure grace of the poet she was born to be.” Her words of wisdom are as true now as they were in 1995. Here are seven excerpts from the interview:

1. Not everyone can pull themselves up by the bootstraps:

The powerful say, “Pull yourself up by your bootstraps.” But they don’t really believe that those living on denuded reservations, or on strip-mined hills, or in ghettos that are destinations for drugs from Colombia and Iraq, can somehow pull themselves up. What they’re really saying is, “If you can, do, but if you can’t, forget it.” It’s the most pernicious of all acts of segregation, because it is so subtle.

Somehow, we have come to the erroneous belief that we are all but flesh, blood, and bones, and that’s all. So we direct our values to material things. We become what writer Beah Richards calls “exiled to things”: If we have three cars rather than two, we’ll live a little longer. If we have four more titles, we’ll live longer still. And, especially, if we have more money than the next guy, we’ll live longer than he. It’s so sad. There is something more—the spirit, or the soul.

3. It doesn’t matter what a woman is wearing:

I married a man once because of something he said. We were in England, and somebody said that women should always expect to be raped if they wore very short pants and low decolletage and acted “fast.” So this man, whom I knew slightly, said, “If a woman has no panties on and sits with her legs wide open, no man has the right to assault her. When a guy tells me, ‘I couldn’t resist because she did sit in such a provocative way,’ all I want to know is if four of her brothers were standing there with baseball bats, would they have resisted?”

4. America is making progress in the fight against racial discrimination, but there’s more to do:

We’ve made a lot of progress—it’s dangerous not to say so. Because if we say so, we tell young people, implicitly or explicitly, that there can be no change. Then they compute: “You mean the life and death and work of Malcolm X and Martin King, the Kennedys, Medgar Evers, Fannie Lou Hamer, the life and struggle of Rosa Parks—they did all that and nothing has changed? Well then, what the hell am I doing? There’s no point for me to do anything.” The truth is, a lot has changed—for the good. And it’s gonna keep getting better, according to how we put our courage forward, and thrust our hearts forth.

5. Black children are the representatives of us all:

Those black children are the bravest, without knowing it, representatives of us all. The black kids, the poor white kids, Spanish-speaking kids, and Asian kids in the US—in the face of everything to the contrary, they still bop and bump [snaps fingers], shout and go to school somehow. And dare not only to love somebody else, and even to accept love in return, but dare to love themselves—that’s what is most amazing. Their optimism gives me hope.

6. Artists and writers must fight to be heard:

What we ought to be doing is singing in the parks, talking to children, going to gatherings of parents, doing whatever it is we do—dancing, reading poetry, performing—all the time, so that people know, “These artists are my people—you can’t kill them, you can’t stop them.” We then reestablish our footing with the people. All artists must do that, or we will be defanged.

7. Progressives must confront themselves: