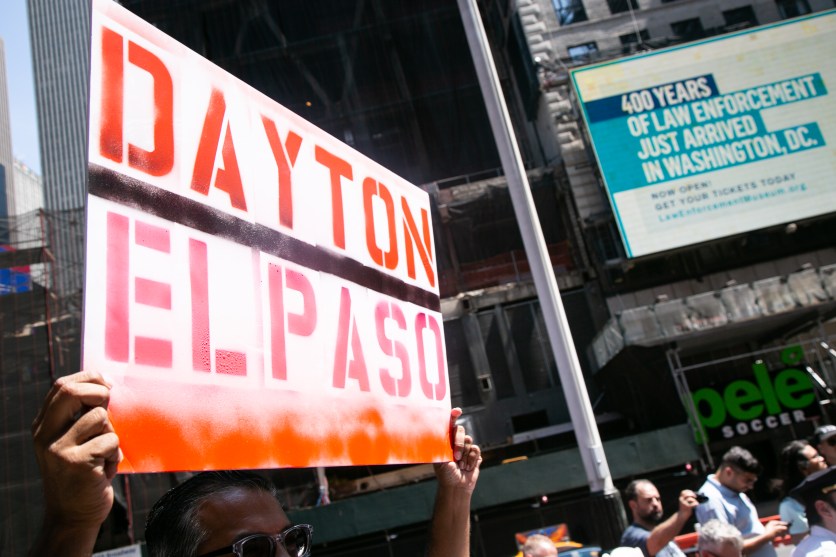 In the aftermath of consecutive atrocities in El Paso, Texas, and Dayton, Ohio, the grim compilation of mass gun death has so consumed our national attention that it’s easy to overlook another kind of weapon widely used before and after mass shootings: language. Weaponized words are on the rise, a fact that isn’t lost on a president whose “invasion” refrains and fluency in white grievance, racist rhetoric, and bullying would be ludicrous if they weren’t so lethal. But Trump’s words aren’t the only dangerous ones. Some are subtler. The latest test of labels’ capacity for harm: “red flag laws.”

The term “red flag laws,” referring to state laws that let police temporarily take guns out of the hands of people deemed extremely dangerous, is under criticism. It’s a “catchy nickname [that] stigmatizes individuals with mental health disabilities” and should be retired, according to the Coalition to Stop Gun Violence, which supports these laws but wants to replace “red flag” with “extreme risk.”

The group sees “red flag” as stigmatizing because it suggests hunches and vague instincts, not careful threat assessment, and hunches can lead to stereotyping of people with mental illness. “The term ‘extreme risk’ is preferable to ‘red flag,’” it argued in a post on Medium earlier this year, “because [‘extreme risk’] focuses on the evidence and science of risk and dangerous behavior,” on “concrete observations” rather than “a subjective, arbitrary process based on intuition or a ‘gut feeling.’” Loose labeling and broad-brushing give “the gun lobby yet another opportunity to change the subject from guns to mental illness—and convince the public that people living with mental illness are the real problem.”

The group continued, “The term ‘red flag laws’ does not accurately describe what these laws do…It perpetuates stigma and reinforces misconceptions about people with mental health disabilities.” “Red flag” inflates the role of mental illness in mass shootings, the group believes, by falsely implying that any flag activates the law, including flags based on mental health. That criticism is echoed by some mental health advocates, including Julia Bascom, executive director of the Autistic Self Advocacy Network, who says “citizens and legislators may believe the term ‘red flag’ encompasses or refers to mental health disabilities. This association, which is often rooted in implicit bias, furthers the incorrect stereotype that mental illness is a significant risk factor for interpersonal violence.”

Whether these laws can prevent the next massacre is an open question, but the issue of labels—whether “red flag” is stigmatizing—should be a closed question. It’s a mistaken argument.

Although well-intentioned and rightly focused on the power of language to shape perception, the argument against “red flag” misses the point. To say that “red flag” is any more marginalizing of mental illness than “extreme risk” is to overlook a plain fact: “Red flag” means extreme risk warning. Replacing one with the other is an act of substitution, not revision. The very definition of “red flag” is “danger signal” (Collins), “sign of danger” (Cambridge), “warning signal” (Webster’s), “a warning of danger” (Lexico), “a flag used to warn people of danger” (Oxford).

How we talk about gun violence and the decoy of mental illness should be greatly improved, and recalibrating language to reframe the debate is an urgent project. But hopping from “red flag” to “extreme risk” doesn’t appear to accomplish it. It might move the needle imperceptibly or in principle, but it’s more likely a euphemistic switch—a move we’ve seen before: the euphemism treadmill.

The concept of a euphemism treadmill, popularized by linguist Steven Pinker decades ago, is the idea that labels chosen to replace offensive or marginalizing ones can themselves become offensive or marginalizing over time, unless the underlying attitudes shift. In classic cases of euphemistic substitution, replacing one label with another doesn’t necessarily reduce stigma if the label itself didn’t create the stigma. When thoughts behind a label persist, any fresh label can absorb the same attitudes at work with respect to people with mental health challenges.

The Coalition to Stop Gun Violence is exactly right to care about language. It’s exactly right to advocate thoughtful word choice and precise labeling. It’s right that there’s a harmful tendency to equate mental illness with dangerousness. But it appears to be mistaken in this case. The words “red flag” don’t create or carry stereotype; it’s the improper raising of the flag that reinforces stereotype.

Language is limitlessly powerful. The Coalition to Stop Gun Violence deeply understands that and sees the stakes. But some labels can be misdiagnosed—like mental health itself—as a cause of something that they’re not primarily responsible for.

As a practical point, “red flag” is useful because it’s the label most clearly and consistently understood by almost everyone in the debate—and it’s a debate that needs a nomenclature—from Democrats to Republicans, gun control advocates to gun rights groups, as well as countless media outlets, including on the progressive left.

Extreme Risk Protection Order (ERPO) is another term widely used for these laws, and just as clear. Call them that too. Call them both. But let’s refine these laws—not the label.