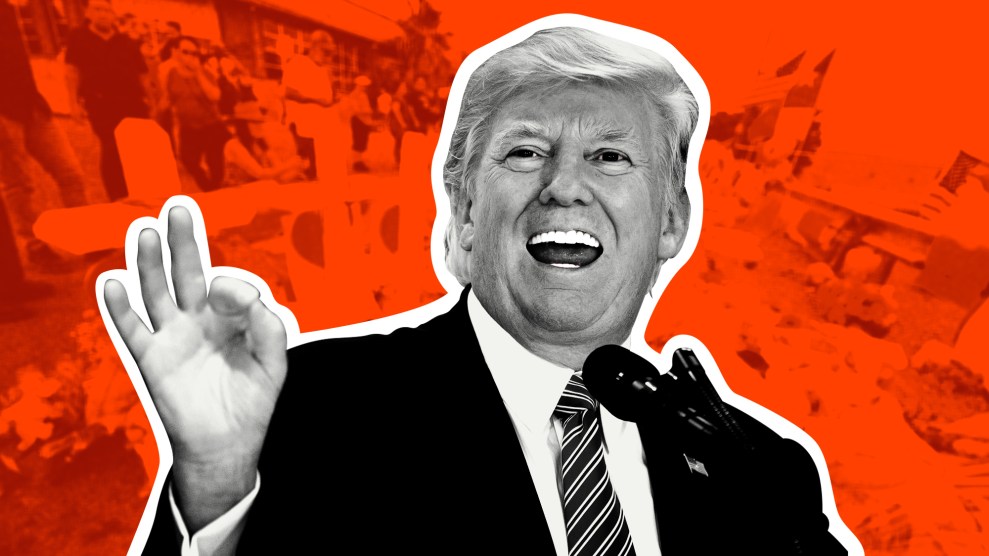 Two years ago, after President Donald Trump infamously defended a white supremacist rally that brought violence to Charlottesville, Virginia, some law enforcement leaders sounded the alarm about a resurgent threat of far-right extremism. Trump’s “very fine people” remarks in the aftermath of the deadly car attack in August 2017 amounted to “a disaster,” as one high-level federal law enforcement official put it to me then, warning: “There are real concerns about where it leads the country.”

By last July, a Mother Jones investigation documented a spate of far-right violence dating from the 2016 election, including two bomb plots and 15 attacks and killings around the country committed by people who expressed racist, xenophobic, anti-Semitic, or extreme anti-government views. A couple of cases included perpetrators who explicitly embraced Trump’s nativist ideas and rhetoric.

Since then, violence linked to far-right extremism has not only continued apace but has grown deadlier as the trend has converged with the mass shootings epidemic. According to Mother Jones research, there have been at least six gun rampages since last October marked by far-right ideology, including the mass murders at a Walmart in El Paso, Texas; a food festival in Gilroy, California; and a synagogue in Pittsburgh. Other recent shootings—at a synagogue near San Diego, a supermarket in Kentucky, and a yoga studio in Florida—were committed by individuals who harbored racist or anti-Semitic hatred. In total, these attacks resulted in 41 victims killed and at least 52 others wounded—nearly double the amount of casualties seen from such cases during the first year and a half of Trump’s presidency, and bringing the overall carnage since Trump was elected to at least 62 people dead and 79 others injured.

The attacks resulted in a total of 41 victims killed and at least 52 others wounded—nearly double the amount of casualties seen from such cases during the first year and a half of Trump’s presidency.

“This attack is a response to the Hispanic invasion of Texas,” the El Paso shooter stated in a document posted online just prior to his rampage, echoing a theme about migrant invasion frequently espoused by the president and his reelection campaign. The Gilroy shooter was also found to have possessed and posted about white supremacist materials on social media, although the FBI said on Tuesday that it hasn’t drawn conclusions due to his possible interest in several violent ideologies. Last fall, the synagogue attacker focused his rationale for mass murder around “caravans of migrant invaders” coming to the US border, another theme repeatedly highlighted by Trump, Fox News pundits and other Trump political allies.

There has also been a spate of arrests in the past year for threats and plots of this nature, including by a heavily armed member of the US Coast Guard, a heavily armed man in Washington state, and a would-be arsonist in Florida. Enraged Trump supporters have targeted members of the so-called House Democratic “squad,” including one who violently threatened Rep. Rashida Tlaib of Michigan in a profane phone tirade, and another who called Rep. Ilhan Omar of Minnesota a “radical Muslim” and vowed to “put a bullet in her fucking skull.”

An enraged Trump supporter called Rep. Ilhan Omar of Minnesota a “radical Muslim” and vowed to “put a bullet in her fucking skull.”

An FBI counterterrorism official stated in congressional testimony in May that “domestic terrorists pose a present and persistent threat…in fact, there have been more arrests and deaths caused by domestic terrorists than international terrorists in recent years. We are most concerned about lone offenders, primarily using firearms,” he added.

In July, FBI director Christopher Wray told Congress that the bureau had made about 100 arrests over the previous nine months stemming from domestic terrorism investigations, and that a majority of the perpetrators were “motivated by some version of what you might call white supremacist violence.”

Two law enforcement leaders I spoke with recently confirmed the trend. A long-time state law enforcement official told me he was aware of numerous thwarted attacks that remain unknown to the public. Federal, state, and local agencies “all have their hands very full these days,” he said, confirming that many cases have had the hallmarks of far-right extremism.

“This [threat] has always been around,” noted a veteran US law enforcement agent with expertise in domestic attacks, “but this is as active as I’ve seen it in a long time.”

It is unclear whether political extremism may have been a factor in Sunday’s mass shooting in Dayton, Ohio, where nine people died and more than two dozen were injured. At a press conference on Tuesday, the FBI said it was investigating the 24-year-old shooter’s alleged interest in “violent ideology”—though amid partisan claims that the shooter held “extreme leftist views,” the bureau declined to provide any details. Ohio authorities have said that no writings or other evidence collected so far show that the shooter—who murdered his own sister in the rampage—was motivated by political views. He was reportedly also kicked out of high school for maintaining “rape” and “kill” lists of fellow students, and had long been fixated on mass shootings and compelled by violent misogyny—a factor seen in many shooting cases.

What is clear is that the further rise of online radicalization and Trump’s bitter politics of grievance have made for an increasingly explosive mix. And there is no sign it will abate. Trump urged “unity” when reciting remarks from a teleprompter shortly after last weekend’s two mass attacks (having already suggested on Twitter that he might horse-trade gun safety legislation for backing of his anti-immigration policies). But then Trump followed a familiar script that evoked his widely condemned response to Charlottesville—reverting to divisive partisan vitriol and again suggesting without evidence that “both sides” are equally to blame for politically motivated mass attacks.

On his way to Dayton and El Paso on Wednesday to meet with local officials and victims, Trump also insisted that his rhetoric, which frequently includes demonizing immigrants and attacking women, African American and Latino leaders, “brings people together.” The American public, however, takes a grimmer view. According to a recent survey from the Pew Research Center, a majority think the president has made race relations worse, with roughly two-thirds saying that it’s become more common for people to express racist views since Trump became president.

As former FBI agent Michael German put it to me last year, “Clearly, [Trump’s] racist rhetoric has empowered white supremacist groups to be much more public. It’s very dangerous because these people who have a history of violence now feel they have state sanction to commit violence.”