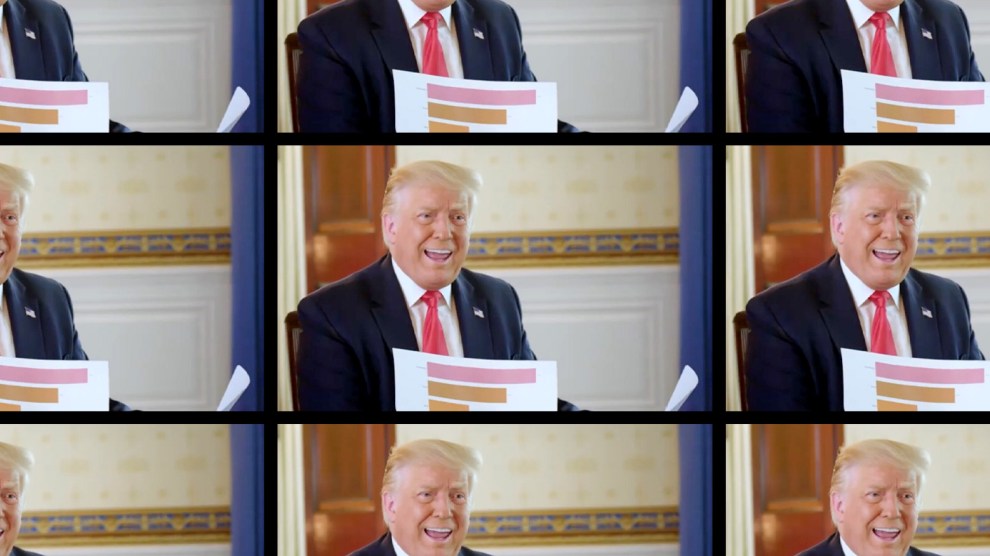 On Tuesday, Axios released an interview with President Donald Trump in which he falsely claimed South Korea was lying about its coronavirus deaths, complained that the late Rep. John Lewis didn’t attend his inauguration, and once again crowned himself as the greatest president of all for Black people. Aside from the exhibitionistic shuffling of papers, the president did not depart from his usual script, although the interview was notable for the moment when he folded like a slice of Kraft American cheese after he was asked the most basic follow-up question.

On Wednesday, I woke up and as part of my job (or so I tell myself) I quickly logged on to Twitter and saw a bunch of tweets about Trump rambling through his greatest hits in an interview. It was all there. The virus would just “go away.” The only reason the United States has so many coronavirus cases is because it does so much testing. He has been the best president for Black people. Wait, I thought, was the Axios interview running again and again? Had I missed something? As it turned out, this was a different interview. The president had done yet another star turn on the very friendly Fox & Friends. In doing so, yet again he reinforced the fact we were all trapped in America’s pandemic time loop, with Trump as our horrifying MC.

There’s a new movie that unintentionally captures that very same feeling. Palm Springs opens with Andy Samberg as Nyles waking up with his beautiful and perky girlfriend, Misty. She seems ready for the wedding they’re about to attend, but Nyles lies in bed exuding the same amount of joy one gets from eating a soggy ham sandwich. At the wedding, we meet Cristin Milioti as Sarah, the maid of honor and the sister of the bride. Nyles and Sarah hit it off right away, escape to the desert for some alone time, and are just two rogue wedding guests until a man comes out of the hills and shoots Nyles with a bow and arrow. As Nyles gives every impression of bleeding to death, he crawls towards a cave, but warns Sarah not to follow him. She chases after him anyway and gets sucked into the light.

Sarah wakes up the next morning, and once again it’s the day of her sister’s wedding. Panicked, she finds Nyles casually relaxing in the pool. “Tell me what the fuck is going on!” she yells. “This is today, today is yesterday, and tomorrow is also today,” Nyles explains calmly. “It’s one of those infinite time loop situations you might’ve heard about.”

“This is today, today is yesterday, and tomorrow is also today. It’s one of those infinite time loop situations you might’ve heard about.”

Damn, I thought to myself while sitting on my couch on yet another Friday night during the pandemic, I feel that.

Since March, when the coronavirus really took off in the United States, each day has felt like being trapped in a nightmare but your alarm clock never wakes you up. On the one hand, it keeps getting worse and worse: more deaths, more infections, more discrediting of science, more destruction of our institutions, more Trump spewing nonsense in interviews and press conferences. On the other hand, the days seem exactly the same.

For Sarah and Nyles, over and over they wake up on her sister’s wedding day. And every day, America wakes up and faces a growing public health and economic disaster with no end in sight. Donald Trump, his administration, and his Republican enablers have mishandled the pandemic so badly they attempt to camouflage their lack of meaningful action by re-litigating the same culture wars over wearing masks, ignoring science in favor of politics, and trying to exert some political damage control in the wake of the president’s often meandering, always uniformed, and generally destructive public comments.

Trump’s botched handling of the pandemic is the underlying theme of the Palm Springs-esque moment the entire country is in. If Trump’s public statements were a game of Bingo, we would all be multiple winners. In the early days of the pandemic, Trump’s coronavirus briefings were marked by an assault of infuriating denial, during which he’d claim the virus would magically disappear, he referred to it as the “China virus,” promoted unproven medical treatments, and, in one memorable instance, suggested injecting bleach as effective treatment.  After his bleach cocktail earned him widespread ridicule, the briefings stopped—for awhile. For reasons that don’t make sense to anyone who has been paying attention—aside from his delusional conviction that the best remedy for his tanking poll numbers is for the American people to enjoy even more exposure to their commander in chief— the briefings are back. Once more, he is saying all the things he’s already said—including one of his favorite lies, which is that the virus is just going to “go away.”

Consider the mask mandates. After some initial confusion over how effective they were and the desire to reserve medical-grade masks for health care workers, the Centers for Disease Control recommended that everyone wear some type of masks when venturing out. In April, many state and local elected officials issued mask mandates of their own, to varying degrees of success. But the fight over masks continues. It feels as if every single day, a brief scour through the internet will yield plenty of anti-mask warriors, repeating the same bogus science about how masks will kill you, or they’re secretly a tool that will lead to Sharia law. And as the staunchest anti-maskers, including the president, came around to grudgingly acknowledging their importance, even their words sounded familiar.

"I want to see college football. The best way for that to occur is for us all to realize is that wearing a mask, as irritating as that can be & I promise I hate it more than anyone watching, is critical."

Wear a mask so we can have college football? Isn’t this just the same as the calls to wear masks we all heard in April, and May, and June…

And still the number of cases are growing. In April, Surgeon General Jerome Adams warned that we were approaching a peak death count. “This is going to be the hardest and the saddest week of most Americans’ lives,” he said. Back then, New York’s hospitals were overwhelmed, tests were few and far between, and every day seemed to drag on. But really, with the exception of replacing what happened in New York with what has been happening in Texas, Florida, and Arizona, was “the hardest saddest week” in April any different from all the subsequent hard, sad weeks?

Months later and everything still feels the same. Cases in Florida, Arizona, and Texas skyrocketed and a death toll thought unimaginable a few months ago is a reality. It’s still taking weeks to get coronavirus tests results back to patients, rendering them mostly useless except as a metric. There’s still no comprehensive plan for nationwide testing, sending children safely back to school, or providing a safety net for the millions facing economic calamity.

Trump’s response to the American clusterfuck is to double down.

Trump’s response to the American clusterfuck is to double down. He’s still downplaying the virus. He’s still demanding that schools and businesses reopen, safety be damned. He’s still blaming China for his incompetence. His failures have an iron grip on the country, forcing us to live the same grim reality  every day. Internally, we all may be joining Sarah as she screams, “Tell me what the fuck is going on!” But in the stark light of these days, the reality is what Nyles so eloquently described: “This is today, today is yesterday, and tomorrow is also today. It’s one of those infinite time loop situations you might’ve heard about.”

In the movie, Sarah at first attempts different strategies to escape from her imprisonment. Then she accepts their new reality and the two form a bond. A montage of Sarah and Nyles going for a swim in a stranger’s pool, shooting comically large guns in the desert, and flying a plane (and dying in a fiery crash) illustrate their chosen time-loop activities. For at least a little while (How many days? Who knows. What does it matter?) Sarah almost seems comfortable in their infinite state. But then she has a jarring realization, one that gives her a single-minded purpose: She has to get out of this madness. And with imagination and focus and being willing to take a big risk, she does.

America can set itself free too. And it probably requires those same ingredients. In our pandemic days that seem to be both long and short, speeding by and dragging on, by summoning the single-minded determination and creativity that Sarah brought to finding a way to break free, metaphorically speaking, we can too.

There are signs that this is beginning already. Support for the Black Lives Matter movement has exploded over the last several months. More and more Americans agree that systemic racism is a widespread problem in this country. Long-shot candidates like Cori Bush in Missouri and Jamaal Bowman in New York unseated longtime incumbents with a wave of support from voters who are finally fed up with the status quo. As Congress twiddles its thumbs and millions of Americans face evictions, protests to stop them have popped up in New York City, New Orleans, and Hyattsville, Maryland. Americans are finally fed up, they want out of the loop, and are acting to make a change.

When Axios‘ Jonathan Swan asked Trump about the 158,000 and counting deaths that happened on his watch, the president responded flatly, as of course he would, “It is what it is.” Indeed, but not for long.