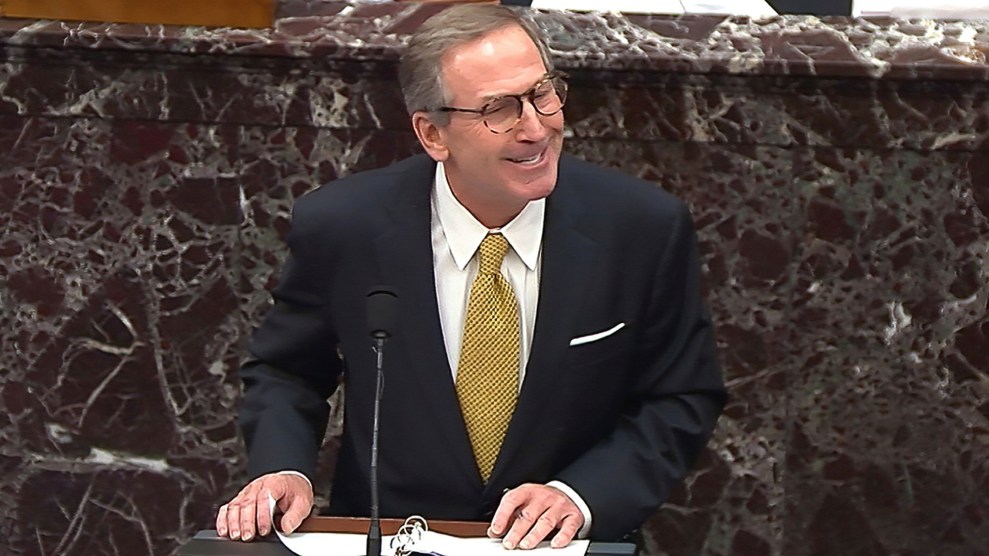 Michael van der Veen, an attorney for former President Donald Trump, speaks during the second impeachment trial of Trump in the Senate on Friday.Senate Television/AP

History will determine the biggest lie of Donald Trump’s presidency. But the foundational fibs were about Russia. In 2016, and ever since, Trump has refused to admit that Russia interfered on his behalf in the 2016 election by hacking and then leaking Democratic emails. Trump also claimed that he had no business interests in Russia, and that his campaign had no contact at all with Russians. Years of ensuing investigation and reporting proved those were big, consequential lies. Russian intelligence helped Trump in 2016 by giving stolen emails to WikiLeaks. While running for president, Trump okayed efforts by aides to seek Vladimir Putin’s help landing a lucrative real estate deal in Moscow. And Trump’s campaign had “numerous links” with Russia and “expected it would benefit” from their help, according to Special Counsel Robert Mueller.

But Trump and his defenders largely succeeded in obscuring this reality by treating Mueller’s failure to find an overt conspiracy between the Kremlin and Trump as evidence that the entire scandal was made up. This disinformation effort showed Trump’s power to declare known facts to be a “hoax” and have his supporters parrot his false claims. Trump’s success in selling a false narrative contributed to the conduct that led to his two impeachments. Getting away with blaming the Russia scandal on his critics seemed to empower Trump to engage in even more mendacious conduct. Just days after Mueller’s widely-panned public testimony before House members, the effective end of a probe that left the president largely undamaged, Trump tried to shakedown Ukrainian President Volodymyr Zelensky to launch bogus investigations targeting Joe Biden and into the 2016 election hack. Trump correctly anticipated that he could declare his damning phone call “perfect” and watch boosters defend it. Trump’s months of lies about mail-in voting and election fraud in turn relied on the presumption his supporters and Republican lawmakers would echo them. Trump’s Russia lies and the so-called “Big Lie” were part of the same false reality Trump concocted. To protect it, Trump supporters engaged in violence on January 6. The lies that began with Russia led to the rampage in the Capitol.

In a sense, it was fitting that Trump lawyer Michael van der Veen on Friday brought up Russia to defend Trump against inciting the attack on Congress. The attorney claimed “the entire Democratic Party and national news media spent the last four years repeating without any evidence that the 2016 election had been hacked. Van der Veen was arguing for excusing Trump’s actions because Democrats, he said, had also used “reckless dangerous and inflammatory rhetoric” about Russia. The implication was a simple equivalency: Democrats pushed the Russia hoax to overturn the 2016 election. Trump pushed the election lie in 2020. It’s a wash.

But van der Veen, in a particularly diabolical piece of bullshit, was repeating Trump’s lies about the “Russia hoax” in a bid to excuse Trump’s lies about the election. Russians did hack Democratic emails, and they did so to help Trump, as every US intelligence agency, Mueller, and the then-GOP led Senate Intelligence Committee found. Trump did try to benefit from that help. And he lied, dangled and later dispensed pardons and obstructed justice to conceal his conduct.

1. Trump lawyer Michael Van der Veen is a Big Lie champion. He says, "The entire Democratic Party and national news media spent the last four years repeating without any evidence that the 2016 election had been hacked." No evidence? That is complete Trumpian disinformation. pic.twitter.com/JP4cpaEtAu

It is no coincidence that many of the key figures in advancing Trump’s lies about Russia—Roger Stone, Michael Flynn, Flynn’s conspiracy theorizing lawyer Sidney Powell, Steve Bannon, and Rudy Giuliani —were also enthusiastic boosters of Trump’s election fraud lies. The Russia lie and the Big Lie, bookends to Trump’s presidency, were part of the same misleading endeavor.

Van deer Veen’s references to Russia were something of an admission. In repeating Trump’s false claims about Russia—not to mention blaming Antifa for the Capitol riot and misrepresenting Trump’s 2017 comments about white nationalists in Charlottesville—Trump’s lawyers passed on seriously defending his conduct. This was more like joining in it.