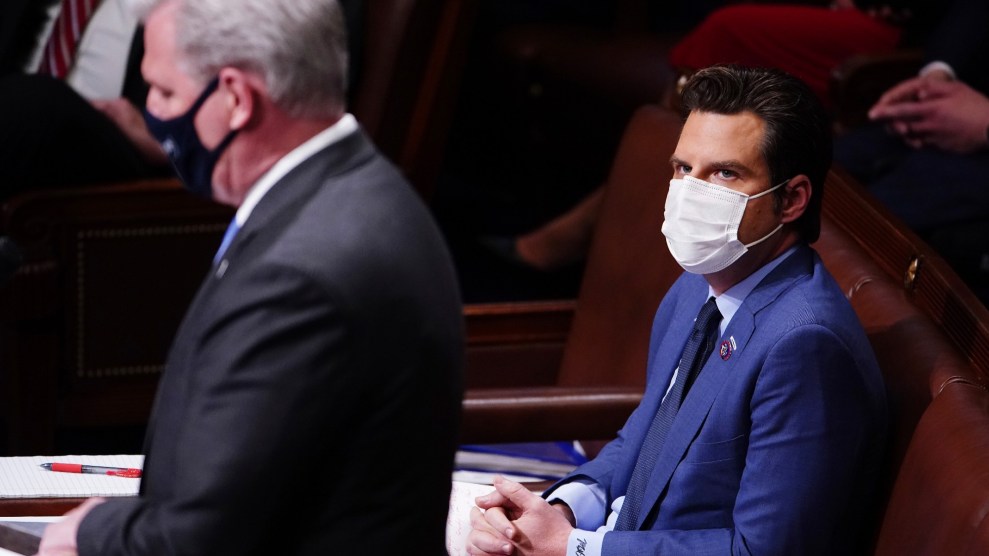 Gaetz gazes at McCarthy on the House floorJim Lo Scalzo/AP

Now that former President Donald Trump has lost his gigantic megaphone, some members of the Republican Party have stepped in to compensate for his absence and are showering us with levels of absurdity unprecedented in the modern era. The party has abandoned all of the conventional trappings of governing and legislating and instead has opted to become the 24/7 comedy channel, as they go to great lengths to defend the most extreme members of their caucus. But let’s not be distracted by the hilarity of some of their antics. In doing that, we could also end up ignoring the inherent danger of one of the two major political parties being completely unserious.

But first, let’s recap some of the fun over the last few days, actions that have really brought into sharp relief just how much of a farce they’ve become. Rep. Matt Gaetz (R-Fl.) famous for wearing a gas mask on the House floor to mock the coronavirus pandemic, tweeted about his shock at the newest horrors from the Democratic Party on Thursday.

I proposed that we begin each meeting of the House Judiciary Committee by reciting the Pledge of Allegiance.

Wow, why do the Democrats hate America so much? Clearly, Gaetz says the pledge every chance he gets! Sure, having to drop what you’re doing—eating a meal, holding a conversation—in order to recite the pledge can be pretty difficult, but it’s the price one must pay to prove ones patriotism.

Fetishizing the Pledge has been a long cherished GOP indoor sport, so his tweet alone should come as no surprise. It’s also minor league when it comes to this Republican’s shenanigans. Last week, Gaetz flew to Wyoming to troll Rep. Liz Cheney (R-Wyo.) because his colleague voted to impeach Trump. On Friday, after Greene’s press conference about how she had been stripped of her committee roles, Gaetz went on Fox News to praise her performance, saying he “almost had to smoke a cigarette afterwards.” Sir, please, this is a family show.

Matt Gaetz on Marjorie Taylor Greene's press conference: "That was so good I almost had to smoke a cigarette afterwards." pic.twitter.com/btVwLFf4eJ

Despite formidable competition, the real superstar of ridiculousness, however, has to be Rep. Marjorie Taylor Greene (R-Ga.), who was stripped of her committee roles after the House voted to punish her for advocating for, among other things, the execution of her Democratic colleagues. Among the litany of bizarre conspiracies Greene promoted, one of them had to do with the September 11 attacks. On the House floor, Greene was forced to accept reality about the events of that day.

“I also want to tell you that 9/11 absolutely happened,” @mtgreenee says.

Who among us hasn’t had to stand up in front of our colleagues and declare that yes, the terrorist attacks absolutely happened? In 2018, Greene made a video in which she acknowledged 9/11 had happened, but she claimed a plane did not crash into the Pentagon. That’s what makes her comments so remarkable now; 9/11 truthers don’t dabble in the idea that the attacks never happened. Their belief is that the attacks were a false flag event, planned by someone on the inside designed to make the public believe it was a terrorist attack. Greene’s overdue acknowledgement that 9/11 happened doesn’t actually do anything to make her beliefs, like say mass school shootings are also a false flag event, remotely acceptable.

Ever loyal, Rep. Jim Jordan (R-Ohio) offered this defense of Greene: “Everyone has done things they wish they didn’t do.” For once, I must acknowledge that he’s absolutely correct. Last summer, for example, I overwatered my tomato plants and ruined an entire harvest. Greene wants to execute her political opponents. We all make mistakes!

But while Jordan offered one asinine defense, one Republican said he had not even heard of the Greene saga. Sen. Tommy Tuberville (R-Ala.) declined to comment on his colleague in the House who had been dominating the headlines for the last week. Why? Well, because he has been unable to read the news on account of the weather.

GOP Sen. Tommy Tuberville says he doesn't know anything about Marjorie Taylor Greene because the bad weather has prevented him from reading the news https://t.co/N6KyG5uUHI

Considering that Tuberville couldn’t correctly name the three branches of government, believed that World War II was fought to defeat communism, and suggested “moving” Inauguration Day until the pandemic was under control, I actually believe that this response was not a dodge. His was a sincere response from someone who has repeatedly demonstrated that he’s just not very bright.

No need for Tuberville to worry about figuring out this confusing Greene business. For that unenviable job we have House Minority Leader Kevin McCarthy (R-Calif.), who took it upon himself to clear up some of the other comments she’s made in the past. In 2018, Greene claimed that the California wildfires were started by a Jewish space laser. On its face, this is absurd. (Everyone knows that all the world’s religions have agreed to share the space lasers used for setting wildfires.) However, McCarthy assuaged any fears one might have about a sitting member of Congress believing in a blatantly anti-Semitic conspiracy theory. “She said she knew nothing about lasers,” he said solemnly.

"Denouncing Q-on, I don't know if I say it right, I don't even know what it is– any from the shootings, she said she knew nothing about lasers" pic.twitter.com/R49WoE9TvL

Greene’s never heard of the lasers? Well then, case closed.

Of course, laughing at the absurdity will only get us so far. (Adolf Hitler’s silly mustache was mocked as well.) And in the end, it’s likely that the Republicans will end up having the last laugh, as they so often do. Their insistence on responding to every societal ill—the pandemic, wealth inequality, systemic racism, climate change—with nothing but nonstop absurdity could eventually get me, and you, dear reader, killed. And when that happens, they’ll show up for my funeral packed in a small car, unmasked faces covered with colorful paint, and rubber red noses. Put it on my gravestone: Here lies Nathalie Baptiste, beloved daughter, wife, and friend—murdered by a bunch of clowns.