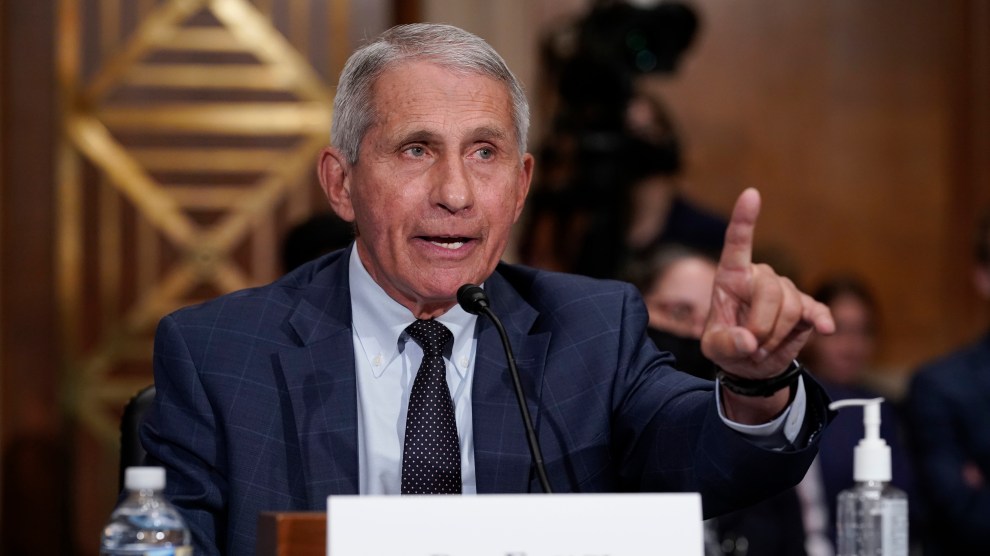 Another Senate hearing on Covid, another spat between Sen. Rand Paul (R-Ky.) and Dr. Anthony Fauci, head of the National Institute of Allergy and Infections Diseases. But, this time, the nation’s top infectious disease expert wanted the senator to see the human toll of his personal attacks.

Paul used his time at the hearing to hit on his usual talking points, accusing Fauci of conspiring with other scientists to shut down the lab leak theory—which posits that the virus originated not in an animal but in a research lab—and tarnish the careers of those who disagreed with him. “It’s the epitome of cheap politics,” Paul said, “and it’s reprehensible.”

Fauci retorted that Paul’s false accusations not only distracted from the pandemic response, but led to attacks on his life. “What happens when he gets out and accuses me of things that are completely untrue is that all of a sudden that kindles the crazies out there,” he said, “and I have threats upon my life, harassment of my family and my children with obscene phone calls because people are lying about me.” (Police recently arrested a man at a traffic stop who had a hit list of government officials and politicians, including Dr. Fauci. The man also had an AR-15 style rifle and ammunition in his car.)

Fauci came prepared with a printout of Rand Paul’s website, which showed donation buttons next to an invocation to “Fire Dr. Fauci.” Fauci told Paul that he was using “a catastrophic epidemic for your own political gain.”

To me, though, the most striking part of the exchange isn’t Fauci’s slick rebuke of the Kentucky senator, but the baselessness of Paul’s argument in the first place. Paul brought up a series of recently released emails between Fauci and National Institutes of Health Director Francis Collins over the Great Barrington Declaration, an October 2020 statement from epidemiologists at Harvard, Stanford, and Oxford arguing that people at low risk for the coronavirus ought to go on with their lives as normal until society reaches herd immunity. (Read the Wall Street Journal opinion piece on the debacle if you dare.)

Paul, brimming with sarcasm, said at Tuesday’s hearing, “Apparently, there’s a lot of fringe epidemiologists at Harvard, Oxford, and Stanford.”

Elite institutions can and do foster fringe ideas—and the fact that the professors who wrote the Great Barrington Declaration continue to be employed at their prestigious universities is evidence against the cancel culture Paul so frequently decries. The Great Barrington Declaration was sponsored by a libertarian think tank and has been criticized as scientifically unsound by the World Health Organization and by a group of scientists including scholars from, yes, Harvard and Oxford. I’m not a scientist, so I can’t opine on the merits of one Covid response over the other. But I can say for certain that wasting the Senate’s time to bicker over the response to a widely discredited statement made by a small minority of epidemiologists isn’t getting us any closer to ending this pandemic for good.