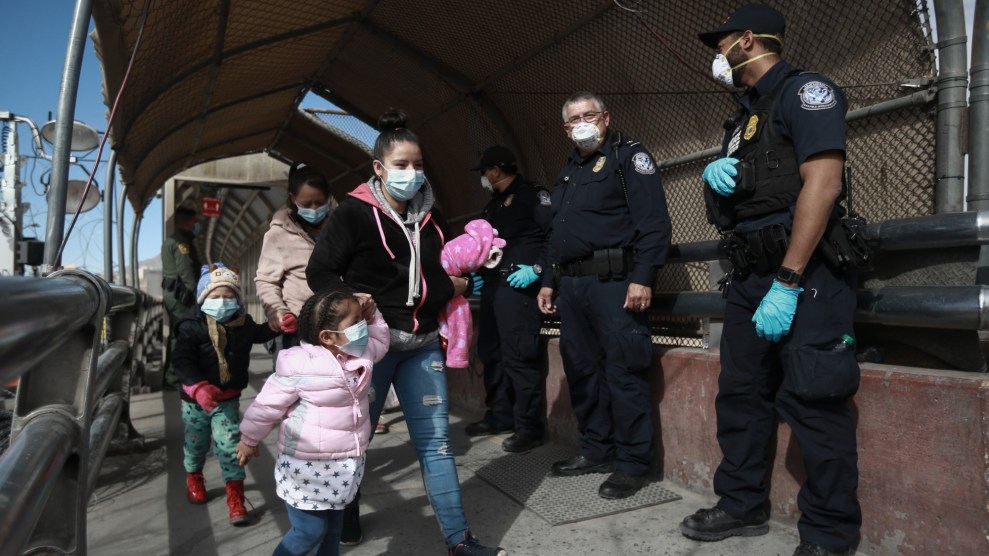 Cities across the country may have been winding down pandemic restrictions in response to a downward trend in Covid cases, but the Biden administration has continued to enforce an obscure Trump-era public health order, known as Title 42, to summarily expel migrants and asylum seekers arriving at the US-Mexico border. But on Friday, the DC Circuit Court of Appeals ruled that even though the government has the authority to return migrants under the provision invoked by the Centers for Disease Control and Prevention (CDC) in March 2020, it can’t send migrant families to countries where they could face harm.

“From a public-health perspective, based on the limited record before us, it’s far from clear that the CDC’s order serves any purpose,” Judge Justin Walker wrote in a 32-page decision on behalf of a three-judge panel, two of whom were appointed by then-president Donald Trump. Title 42, the ruling further states, “looks in certain respects like a relic from an era with no vaccines, scarce testing, few therapeutics, and little certainty.”

The Biden administration has fiercely defended the policy in court, despite opposition from immigrant rights groups and public health experts, and the fact that ports of entry have been open for tourists and travelers. As my colleague Fernanda Echavarri wrote in January, the Department of Justice has argued that the policy is necessary to prevent the spread of the coronavirus in crowded detention settings, which would pose a risk to migrants and border patrol agents alike.

However, ACLU lead attorney Lee Gelernt, who represents the refuge-seeking migrant families suing the US government, argued that the people affected by Title 42 expulsions make up only 0.01 percent of the traffic coming in from Mexico—and that the other 99.9 percent is able to come and go between the two countries even as the pandemic continues. All ports of entry have been opened for travelers and tourists, and air travel between the two countries continues unrestricted. So, it’s hard not to ask: What makes this small percentage more of a risk to US residents than travelers with visas and US passports?

During fiscal year 2021, the Biden administration conducted more than one million expulsions under Title 42, which denies migrants the right to request asylum. Unaccompanied minors and some families have been exempted. The policy also pushes migrants to take more risks by undertaking repeated attempts at crossing the border through ever more dangerous routes, increasing the rates of rescues conducted by CBP and of migrant deaths, as my previous reporting for Mother Jones has shown.

“Today’s decision is a win for immigrants and confirms what we have been fighting for,” Tami Goodlette, director of litigation at the Refugee and Immigrant Center for Education and Legal Services (RAICES), said in a statement, “that the expulsion of immigrants under Title 42 is inhumane, immoral, and illegal and it must end.” The group asks the Biden administration not to appeal the case to the Supreme Court.