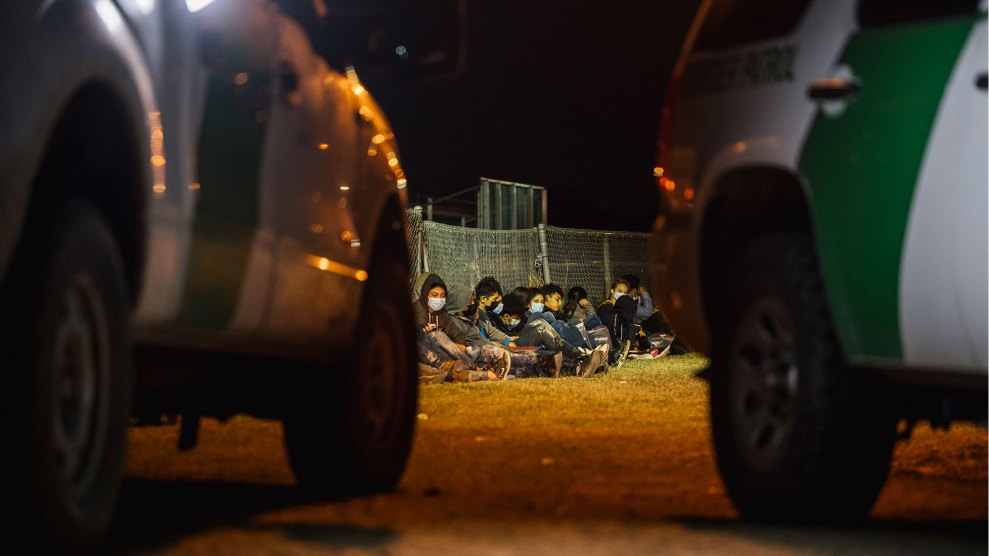 Migrants sit against a fence while waiting to board a Border Patrol bus after crossing the Rio Grande in November 2021. Brandon Bell/Getty Images

The Biden administration argued in court Wednesday in defense of Title 42, a Trump-era border closure policy that has relied on the public health emergency created by the pandemic to quickly return migrants crossing the US-Mexico border. It was striking to hear the Department of Justice defending the harsh policy, while at the same time it has been arguing against returning asylum seekers to Mexico under another Trump-era border policy, Remain in Mexico, which they admit forces migrants into harrowing conditions and extreme violence.

For the last year, President Joe Biden has faced strong opposition for continuing to quickly expel migrants under Title 42, but his administration has kept saying it is necessary to stop the spread of Covid at the US-Mexico border. Wednesday’s hearing showed just how much the administration wants to keep this policy in place, even as health conditions continue to evolve and health care experts question its efficacy and call for its end.

He pointed out how many basketball arenas do not require proof of vaccination before allowing thousands to attend games; congregate settings that pose risks could include packed airports and flights.

Sharon Swingle, the lawyer arguing on behalf of DOJ, argued that the key reason to keep Title 42 is the conditions in immigration detention. Essentially, that when border agents apprehend undocumented migrants, they detain them in small crowded rooms where it would be difficult to keep a distance or isolate. This, she argued, not only puts migrants at risk of getting and spreading Covid, but it also endangers US Customs and Border Protection agents, as well as the US residents of communities where migrants would later be released.

However, ACLU lead attorney Lee Gelernt, who represents the refuge-seeking migrant families suing the US government, argued that the people affected by Title 42 expulsions make up only 0.01 percent of the traffic coming in from Mexico—and that the other 99.9 percent is able to come and go between the two countries even as the pandemic continues. All ports of entry have been opened for travelers and tourists, and air travel between the two countries continues unrestricted. So, it’s hard not to ask: What makes this small percentage more of a risk to US residents than travelers with visas and US passports?

The hypocrisy of keeping the border closed only to undocumented migrants was not lost on the judges or the plaintiff’s lawyers. If the issue, as Swingle said, was to prevent infection in congregate settings like border detention facilities, the Department of Homeland Security could take mitigating measures to address that. “This isn’t March 2020,” said DC Circuit Court Judge Sri Srinivasan. He mentioned the availability now of Covid tests, protective masks, and vaccines that prevent severe illness and death from the virus. Plus, everyone in the United States—including CBP agents—who wanted to protect themselves by getting vaccinated against Covid has had the opportunity to do so for a year.

“The CDC is saying, ‘Look, the whole country is open,'” Gelernt said Wednesday. He pointed out how many basketball arenas do not require proof of vaccination before allowing thousands to attend games; congregate settings that pose risks could include packed airports and flights, yet there are no restrictions on domestic travel. Plus, unaccompanied underage migrants have been given an exemption and are processed in congregate settings at the border, he said.

Title 42 was first enacted in March 2020 when the Trump administration invoked a federal code that states the government has the power to prohibit people from foreign countries or places once the surgeon general determines there’s a serious danger of introducing a communicable disease from a foreign country. But, at this point, the rule is just not matching reality; as another DC circuit court judge, Robert Wilkins, said Wednesday: “The statute refers to introducing a disease, but Covid is unfortunately quite introduced into the United States by this point in time.”

Wednesday’s hearing in the DC Court of Appeals was for a 2020 case in which the ACLU, the Center for Gender & Refugee Studies, Oxfam America, RAICES, Texas Civil Rights Project, the ACLU of Texas, and the ACLU of the District of Columbia sued the Trump administration over the expulsions of refugee families under Title 42. In September 2021, a federal district court ruled that Title 42 was illegal but the Biden administration appealed the ruling and continued to expel migrants. Later that month the policy was used to forcibly return Haitian asylum seekers at the Texas border, sparking controversy (though there’s been little accountability).

Now it’s up to US Circuit Court Judges Srinivasan, Wilkins, and Justin Walker to decide whether or not to side with a lower court and deem the policy unlawful. (Srinivasan was appointed by former President Obama; Walker and Wilkins are Trump-appointed judges.)

“The statute refers to introducing a disease, but Covid is unfortunately quite introduced into the United States by this point in time.”

During the two-hour hearing, Srinivasan also called out the government for seeming to downplay the risks for migrants in Mexican border cities when they’re sent back under Title 42, relative to the risk of Covid. He said the Biden administration has publicly opposed the Remain in Mexico policy, calling it “inhumane” because it expelled asylum seekers and forced them to wait in Mexican border cities, where they lived in squalor and were victims of crime and abuse. In fact, the Biden administration has moved to repeal this policy and it only remains in place due to a court order. Again, the judges asked, how is Title 42 different?

Swingle said border officials are “providing an opportunity” for some humanitarian relief to certain migrants who express fear and are therefore referred to the US Citizenship and Immigration Services. She also said the administration would like to get back to a place where they can process everyone at the border in an orderly manner, but being required to do that now would be “an alarming specter from a public health perspective.”

Gelernt concluded keeping Title 42 in place is just a matter of allocating resources and DHS has had a long time to find a way to safely process undocumented migrants and asylum seekers at the border: “There’s something going on here that is not just about public health.”