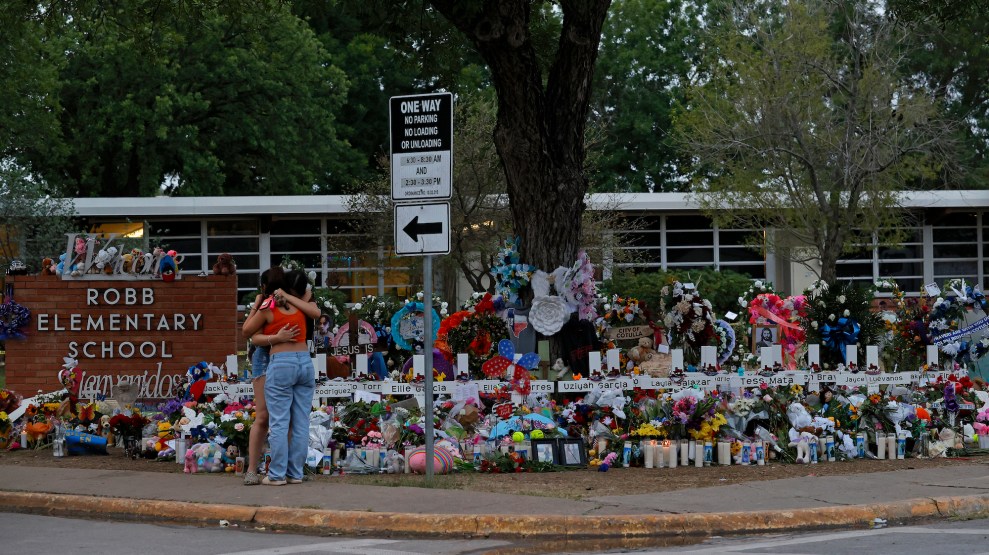 People embrace outside a memorial to honor the victims killed in this week's school shooting outside Robb Elementary School, in Uvalde, Texas.Aaron M. Sprecher/AP

On Sunday, the US Department of Justice announced it would formally investigate the police response to the murder of 19 children and two teachers at Robb Elementary School in Uvalde, Texas.

Questions have multiplied about the police response in the aftermath of the killing spree. The gunman spent 78 minutes inside the building, even as the members of the Uvalde Police Department and officers from other law-enforcement agencies gathered outside. Terrified parents gathered, too, and reported being handcuffed and even pepper-sprayed by those same cops. As the massacre dragged on, at least two kids on the inside repeatedly called 911, begging in vain for help.

“The goal of the review is to provide an independent account of law enforcement actions and responses that day, and to identify lessons learned and best practices to help first responders prepare for and respond to active shooter events,” a DOJ spokesman said in a statement to CNN. “As with prior Justice Department after-action reviews of mass shootings and other critical incidents, this assessment will be fair, transparent, and independent. The Justice Department will publish a report with its findings at the conclusion of its review.”

Previously, Texas Gov. Greg Abbott had tried to reassure the public by conducting a much different kind of investigation. In a May 25 press release, his office announced that the state’s assessment of the May 24 debacle is “being led by DPS Texas Rangers and the Uvalde Police Department.” In other words, after what looks like an epochal botching of an effort to save the lives of a mostly Latino group of fourth graders, Abbott had entrusted the Uvalde Police Department to investigate its own performance, aided by the Texas Rangers.

Venerated in pop culture and by politicians like Abbott, the Rangers are a state law-enforcement unit with a long history of atrocities against Native Americans, Mexican nationals, and Mexican Americans. As my colleague Tim Murphy pointed out in a great 2020 article, “unlike the Confederates or Columbus, the Rangers are still around and profiting from their past—they’re a ‘living monument,’ as [a] booster once said.” These days, he added, “the Rangers are the ones brought in to investigate when a local law enforcement officer kills a civilian, or when a Texan dies in custody (such as the 2015 death of Sandra Bland).” Tim quoted Domingo Garcia, president of the League of United Latin American Citizens: “The Texas Rangers come in and they whitewash the killing and always absolve the local police officer.”

Abbott tapped them to make sense of how the Uvalde Police Department handled last week’s rampage. The dead, the survivors, their families, and the public as a whole are owed a full accounting of what went wrong. The DOJ’s intervention is the least we can ask for.