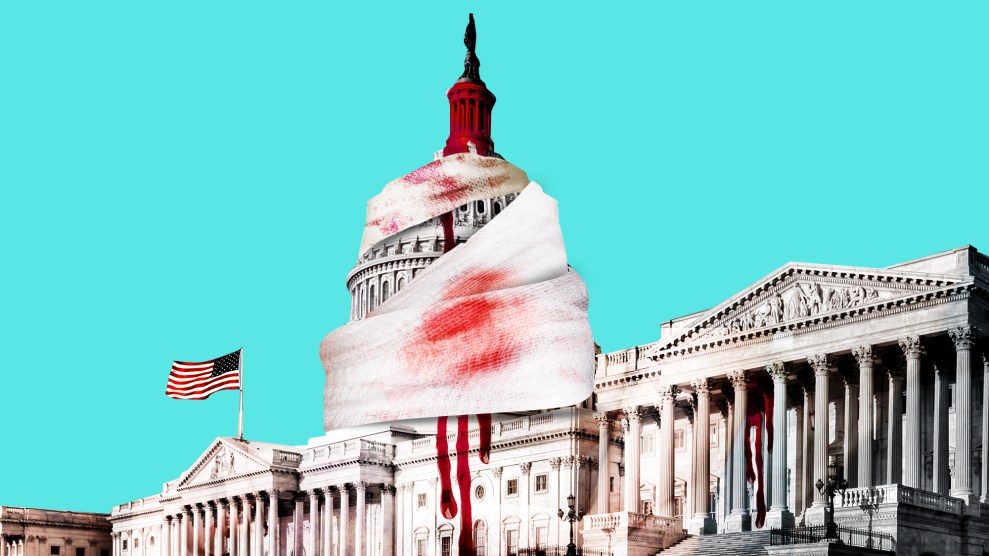 Wait, what is this all for?

Starting this week, the House’s January 6 Committee will hold a series of hearings, at least two of which will be in “primetime,” on the blitz of the Capitol by protesters egged on President Donald Trump on January 6. As my colleague David Corn has reported, the hope is to “convey the full significance of the insurrectionist assault on Congress.”

At some point, the medium becomes the message.

The seven Democrats and two Republicans on the panel face a massive undertaking to convince the American public, many of whom largely believe the news has exaggerated the affair, that something went dreadfully wrong on January 6, that American democracy was fundamentally harmed. It is an attempt to lay down for history what occurred.

Which is why it was odd this morning when the New York Times described the hearings as aimed at something else: winning the 2022 midterms.

NYT headline about violent coup to topple multi party electoral order of US republic apes talking point of party that orchestrated and covers up for sedition by casting attempt at national reckoning & accountability as a political horse race stunt pic.twitter.com/UtnN8VlgY5

Perhaps this is just a bad headline. The Washington Post reported Democrats are “not counting” on the January 6 hearings for influencing voters in the upcoming midterms; in the story, Rep. Elaine Luria (D-Va.) noted that the presentation is solely “focused on presenting the American people with the truth about this violent attack.” The Times’ own report contains much of the same rhetoric.

But the headline is one set of a larger piece: New York magazine reported the plan is to “cast as stars” Ivanka Trump and Jared Kushner. Democrats hired a former ABC News producer to assure it is, according to Axios, a “blockbuster investigative special.” At some point, the medium becomes the message.

What is this week’s massive, spectacle TV show actually defending? Institutions? Democracy? Rule of law? You mean the things that…don’t seem to be working at all for so many people?

Since January 6, and for much of the Trump era, Democrats have melded defenses of democracy with pleas to Vote Blue. (Donate, too, folks.) And so when Rep. Sean Patrick Maloney (D-N.Y.) tells the Times he wants the hearings to show “how irresponsibly complicit Republicans were in attempting to toss out their vote and just how far Republicans will go to gain power for themselves,” it’s easy to ask: Is he talking about the midterms or an investigation of a violent attack? The answer is Democrats want it to be both.

Institutions? Democracy? Rule of law? You mean the things that…don’t seem to be working at all for so many people?

Let’s remember: Over the past few years, a central thesis of the Democrats’ message has been to protect institutions of democracy. And that worked—they won. Yet, now with that power? Not much has changed. Democrats failed to enshrine reforms like eliminating the filibuster and passing voting protections, among many others. They have often fallen short in making the institutions strong enough to be cheered.

Partly as a result, everything else is broken, too. After a heartbreaking deluge of mass shootings, Congress can’t pass gun reform. The Supreme Court is about to overturn Roe as the federal government more or less sits on its hands. Police, transit, housing, and health care remain fundamentally broken. COVID relief could have heralded a larger social welfare state if enshrined, fulfilling all those heady pieces about Joe Biden’s New Deal; instead, Democrats couldn’t even keep around the expanded child care tax credit, which had lifted many out of poverty. For all the paying attention to court cases, scandals, reports, hearings, and impeachment(s) that would finally oust Trump, he’s been fine. Carbon filters into the sky.

Yelling about our chief Democratic obstructionists in Sens. Joe Manchin and Kyrsten Sinema isn’t wrong as a response to this. But we’re living under a system designed to empower them.

So, sure, one can imagine how these hearings would be a good idea, a thorough presentation that outlines the core concepts of what some Democrats have been screaming for a long time: The other side cares more about winning (appeasing Trump, in our parlance) than democracy (the will of the people) and here’s the proof.

But that gambit doesn’t work as well if everything, the very system itself, is broken. The material benefits of democracy must flow to people from the institutions to earn all this defense. If not, we are in grave danger.

The right has made clear where it’s headed. Consider the ascendency of Senate hopefuls J.D. Vance and Blake Masters, who have shorn their economic populism pretty far from the economic. Ponder the New Right. Think about (shudder, I’m sorry) how the faux-Marxists cool kids have indulged in it. They are landing pretty close to fascism. The Republican Party has illustrated it’s okay with a tinge of illiberalism. Who could forget CPAC in Hungary?

January 6 was the more obvious of the antidemocratic moments of the past few years. But as Ari Berman has written for us, it is the slow-moving destruction of election law that could papercut our system to its knees. We’re living through a dirge of democracy; January 6 was a high note. If someone savvier takes up the reins, the next coup will likely be horrible, but also boring—and it might even be exceedingly popular.

The Democrats’ response to that cannot be only to message harder, even if it’s during primetime, that the other side is antidemocratic. Everyone saw it. The problem is that not enough people care that much about the sacred values of a Republic. They care about other things. For some, that’s bare allegiance to Donald Trump; for others, it’s tax cuts. No amount of framing will outweigh the galling lack of action by Democrats.

Democrats need to not only defend democracy in hearings, they have to make it popular in real life. Or else it seems like all there is the show.

There is only one solution: Shit has to work. I get that’s not easy, but democracy has to function as a way to make the lives of people tangibly and materially better. If it does not, people won’t believe in it. Democrats need to not only defend democracy in hearings, they have to make it popular in real life. Or else it seems like all there is is the show.

This is something Eric Foner, the historian most famous for his book on Reconstruction, recently wrote about the history of the Democratic Party for the London Review of Books. In defeating Trump, Foner warns, many missed how easily a new Republican coalition is forming. He seems to agree with Michael Kazin, whose new book, What It Took To Win, allows him to give a tour of the history of the party, in noting that “the Democrats have succeeded…when they have enacted policies, such as Medicare in the 1960s, that demonstrably serve all segments of the working and middle class.”

Lately, in having these thoughts, I’ve come back to a piece from 1941 by Dorothy Thompson. In it, she famously wrote about the “macabre parlor game” of wondering “Who Goes Nazi?” There are “the born Nazis, the Nazis whom democracy itself has created, the certain-to-be fellow-travelers,” she writes.

Often, we think of the born Nazis. These are easy enough to identify. But I want to pause for a moment on those “whom democracy itself has created.” Who is this man? Thompson describes him thus: “He is the product of a democracy hypocritically preaching social equality and practicing a carelessly brutal snobbery. He is a sensitive, gifted man who has been humiliated into nihilism. He would laugh to see heads roll.”

Democrats must do everything in their power to stop that nihilism.