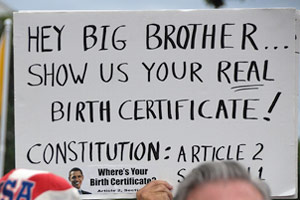 Is President Barack Obama spending millions of dollars to hide the truth about his citizenship?

During Obama’s 2008 run for the White House, his campaign and a host of other credible sources repeatedly debunked the conspiracy theory that Obama was born in Kenya, not Hawaii, and was thus ineligible to serve as president. But this failed to quell the “birther” movement, whose acolytes have filed more than 60 civil lawsuits challenging the president’s citizenship. None of these suits have gone anywhere in court. But birthers say that’s because Obama has unleashed a phalanx of powerful lawyers to silence them—spending $1.7 million in the process, according to WorldNetDaily (WND), an enthusiastic online promoter of the birthers’ cause.

Given the sheer number of cases, it seems plausible that the president and the government may have been forced to devote real resources to their defense. But in fact the opposite may be true: The birthers’ own copious legal bungling could wind up costing them more than Obama will have to spend defending himself.

The birthers have peppered dozens of state and federal courts around the country with legal challenges—against the president and other government officials and organizations who had some role in allowing Obama’s name to be placed on the ballot, including the Federal Election Commission, various state election officials, and the US Supreme Court. Some of the suits, particularly those filed by the movement’s leading lady, California lawyer/dentist Orly Taitz, have been headlined by members of the military claiming they’ve been wrongfully made to serve in foreign wars by an illegitimate commander in chief. Most recently, birther attorneys have represented car dealers who charge that Obama is a phony president who lacked the authority to order a restructuring of Chrysler that they say cost them their businesses.

WorldNetDaily has noted that FEC filings show that Obama’s presidential campaign has paid out more than $1.7 million since the election to the law firm of Perkins Coie. Until recently, that firm was home to Obama’s campaign lawyer, and now White House counsel, Robert Bauer—the very same DC lawyer, says WND, who has defended Obama in many of the birther lawsuits. Ergo, WND concluded, Obama must be devoting that entire $1.7 million to crushing birthers in court. This is a ridiculous claim: Even after an election is over a presidential campaign has plenty of need for lawyers as it winds down operations and meets campaign finance law requirements.

But WND’s editors believe they have a smoking gun in a letter Bauer sent on April 3 to John David Hemenway, a DC lawyer representing retired Air Force Colonel Gregory Hollister in a suit against “Barry Soetoro…de facto President in posse.” (Some birthers claim Obama is actually an Indonesian citizen who shares his last name with his Indonesian stepfather, Lolo Soetoro.)

The lawsuit claims that Hollister may be unable to perform his duty to uphold the Constitution if Obama called him out of retirement and ordered him to war, because Obama isn’t a natural-born citizen. A US District Court judge dismissed the “frivolous” case and reprimanded the 83-year-old lawyer for filing it. Nonetheless, Hemenway appealed, prompting Bauer to send him a letter warning that Obama would seek sanctions if he pursued the matter.

WND and many of its readers apparently believe this letter proves that Obama has teams of expensive lawyers working round the clock to stomp out the suits and intimidate the underdog plaintiffs and their attorneys. The White House never responded to WND’s questions about the legal fees, and Bauer didn’t respond to Mother Jones. But the birthers’ lawsuits don’t exactly seem to be requiring Obama’s lawyers—government or private—to burn the midnight oil.

Roger West, an assistant US attorney in the central district of California, represented the government in a lawsuit brought by Taitz on behalf of perennial presidential candidate Alan Keyes, asking the court to require that Obama prove he is a natural-born citizen. The case has dragged on for more than a year, mostly because Taitz, a graduate of an online, unaccredited law school, failed to serve the defendants. Judge David O. Carter dismissed the suit in October for a host of reasons, but Taitz has appealed. Yet West says that far from bleeding his office, Taitz and her co-counsel Gary Kreep have assembled such a weak case that he hasn’t had to spend much time on it. “I filed one motion that didn’t take too long, we’ve had two hearings and that’s it,” he says. “It’s not like we’ve devoted some sort of task force to this.”

Army Major Rebecca Ausprung handled two of the birther cases against the Department of the Army that disputed Obama’s authority as commander in chief to order soldiers to war. Ausprung says she spent a few hours drafting motions and doing research, and she did have to make three short trips to Georgia from Arlington, Virginia. She prevailed in both cases. “The monetary cost to the government in defending these two cases was extremely minimal,” she says.

Or consider a case filed by one of the most prolific birther litigants, Philip J. Berg, that went all the way up to the 3rd Circuit Court of Appeals. In November the court dismissed the appeal and ordered Berg to pay the legal costs for the defendants, which included the Federal Election Commission. Here was the government’s big chance to recoup its millions. But when the FEC submitted its bill, the grand total came to $20.40. This doesn’t include the cost of the time government lawyers spent writing briefs and appearing in court. Yet it’s clear that as much of a nuisance as these suits are for the government, that’s all they are: a nuisance.

In fact, the plaintiffs may be spending far more time and money on these cases than Obama or the government is, in part because of their failure to abide by basic court procedures. In one of the Georgia cases Ausprung handled, a federal judge sanctioned Taitz in October for $20,000 for, among other things, pursuing a case long after a judge had dismissed it and her own client had discharged her. Taitz has refused to pay the fine.

So far, judges have been remarkably tolerant of the birthers’ shenanigans—despite being handed abundant opportunities to throw their petitions out of court. In one case, Taitz allegedly encouraged supporters to contact the judge by phone and mail to lobby for her cause—a glaring ethics violation that he chose to ignore. Another of her cases only went forward because the federal judge basically begged the defendants to let Taitz serve them—the first step in any lawsuit, but one that Taitz had neglected to take for about seven months. The judges’ written opinions suggest that by giving the birthers’ cases a full airing, they hope to put some of the most outrageous allegations to rest.

But not only have the birthers shown little gratitude to the judges who have indulged them, their court losses have also fueled the conspiracy theories that the judges had hoped to extinguish. Taitz accused US District Judge Clay Land of having improperly discussed one of her cases with Attorney General Eric Holder, and submitted a sworn eyewitness account describing a clandestine meeting in a Columbus, Georgia, coffee shop between the judge and a man with a “trim upper lip mustache, not large of stature and general olive complexion”—whom the source naturally assumed to be the attorney general. On the day in question, however, Holder was making a public appearance 2,000 miles away in Los Angeles. Expect the birthers’ theories to become even more far-fetched as their legal endeavors continue to fail.