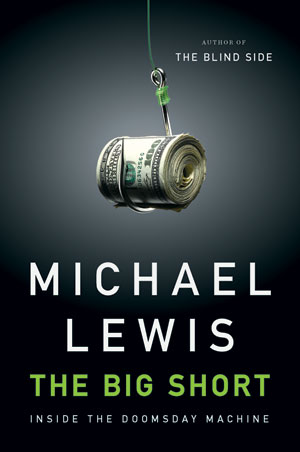 The cover of Michael Lewis' "The Big Short." Courtesy of W.W. Norton.

Steve Eisman, the outspoken investor whose huge wager against the subprime mortgage market was chronicled by author Michael Lewis in his bestselling book The Big Short, has set sights on a new target: for-profit colleges of the kind of you might see advertised on daytime TV and at bus stops. Think ITT Educational Services, Corinthian Colleges, or Education Management Corporation.

In a speech titled “Subprime Goes to College,” delivered Wednesday at the Ira Sohn Investment Research Conference, Eisman blasted the for-profit education industry, likening these companies to the seamy mortgage brokers who peddled explosive subprime loans over the past two decades. “Until recently, I thought that there would never again be an opportunity to be involved with an industry as socially destructive and morally bankrupt as the subprime mortgage industry. I was wrong,” Eisman said. “The for-profit education industry has proven equal to the task.” (All of Eisman’s remarks here come from a copy of his prepared remarks obtained by Mother Jones.)

Eisman, a blunt, no-frills portfolio manager at FrontPoint Financial Services Fund, a Morgan Stanley subsidiary, became an overnight sensation as one of the main characters in Lewis’ latest. After witnessing the first wave of subprime madness in the 1990s, Eisman grew skeptical of the industry as a whole, Lewis writes. Then, when subprime surged again in the 2000s, he put his knowledge to work. Needless to say, he’s a lot richer than he was two years ago.

The for-profit education sector has soared over the past decade, making companies like ITT and Apollo Group into heavyweights. Driving much of the growth, Eisman explained, was the sector’s easy access to federally guaranteed debt through Title IV student loans. In 2009, he said, for-profit educators raked in almost one-quarter of the $89 billion in available Title IV loans and grants, despite having only 10 percent of the nation’s postsecondary students.

Eisman attributes the industry’s success to a Bush administration that stripped away regulations and increased the private sector’s access to public funds. “The government, the students, and the taxpayer bear all the risk and the for-profit industry reaps all the rewards,” Eisman said. “This is similar to the subprime mortgage sector in that the subprime originators bore far less risk than the investors in their mortgage paper.” (Calls to several for-profit colleges, including ITT and Corinthian, were not immediately returned.)

Another similarity between subprime lending and for-profit education is this, Eisman said: Both push low-income Americans into something they can’t afford—in the schools’ case, pricey programs that leave the students heavily in debt; what’s more, the degrees they get mean little in the real world: “With billboards lining the poorest neighborhoods in America and recruiters trolling casinos and homeless shelters—and I mean that literally—the for-profits have become increasingly adept at pitching the dream of a better life and higher earnings to the most vulnerable.”

Eisman went on to cite the industry’s dropout rates of 50-plus percent as another sign of poor quality; the numbers are likely understated, he added, given that the industry reports them voluntarily. “How good could the product be if dropout rates are so stratospheric?” he asked. “Default rates are already starting to skyrocket. It’s just like subprime—which grew at any cost and kept weakening its underwriting standards to grow.”

How does this kind of industry even stay in business? That, Eisman asserted, has much to do with accreditation. There are two main tiers of college accreditation: national and regional—the latter being the more valuable. (Big schools like Yale and the University of Michigan are regionally accredited.) As Pulitzer Prize-winner Dan Golden has reported, for-profit colleges with the weaker national accreditation have started acquiring financially troubled colleges for their regional accreditation. In a Bloomberg report, Golden cites ITT’s acquisition of New Hampshire-based Daniel Webster College in June 2009 for $20 million, a purchase that could ultimately reap $1 billion or more for ITT.

Eisman saved the ugliest part for last: As he sees it, the industry’s era of massive profits—ITT is more profitable on a margin basis than Apple, he notes—are about to end, thanks to new government regulations in the pipeline. He predicts big hits to the per-share earnings of Apollo Group, ITT, Corinthian Colleges, Education Management Corporation, and the Washington Post Company—which owns and relies on Kaplan for profitability. For ITT and Corinthian, Eisman foresees 2010 losses of nearly 40 to 50 percent. Regarding EDMC, he noted in his prepared remarks that the company’s 2010 fiscal estimate is “massively negative.”

Eisman ended with a warning:

Are we going to do this all over again? We just loaded up one generation of Americans with mortgage debt they can’t afford to pay back. Are we going to load up a new generation with student loan debt they can never afford to pay back? The industry is now 25 percent of Title IV money on its way to 40 percent. If its growth is stopped now and it is policed, the problem can be stopped. It is my hope that this administration sees the nature of the problem and begins to act now. If the gainful employment rule goes through as is, then this is only the beginning of the policing of this industry.

But if nothing is done, then we are on the cusp of a new social disaster.

Not all experts on the for-profit education foresee such an ominous future. Trace Urdan, a managing director at Signal Hill who analyzes the industry, told Mother Jones earlier this week that pending regulation from Washington could indeed complicate the future for for-profit colleges. He added, however, that “if you’re short on the industry right now, you think there’s a game-over scenario on the way”—something Urdan himself doesn’t necessarily see happening. Should the Education Department strongly crack down on for-profit schools, Urdan said he predicted losses of 8 to 12 percent—far less than Eisman’s 40 to 50 percent projection.