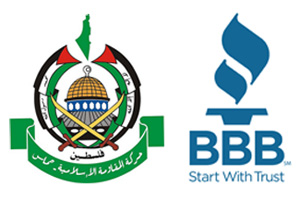 On Monday, after ABC aired a story about a new investigation into Glenn Beck’s favorite gold company, Goldline International, for fleecing its customers, the company responded by posting a long letter to ABC on its website defending its corporate practices. To prove that it is not a scummy company preying on people’s economic fears, Goldline repeatedly touts its A+ rating from the Better Business Bureau in Los Angeles. It writes, “Goldline has an A+ rating from perhaps the most trusted consumer organization, the Better Business Bureau. In contrast, there are several precious metals companies throughout the United States, including competitors in New York and California, which have F ratings.”

As we’ve noted here before, the BBB rating doesn’t mean much. But just to drive that point home, the author of the website BBBRoundup went a step further to illustrate just how easy it is for an entity to earn the BBB’s seal of approval. He registered the terrorist group Hamas with the LA BBB, paying the $425 for it to become an “accredited business” with the venerable consumer bureau. The BBB’s Hamas listing states that the business is devoted to “providing educational services to troubled youth,” and that it has received an “excellent rating” from the BBB. And just to show what kind of companies earn an “F” from the BBB, the site also compared the BBB rankings of a fake company it paid to accredit, Moores Sushi, with the coffee chain Starbucks. The BBB gave the fake sushi supplier that forked over some cash an “A-” rating, while Starbucks, which is not a BBB member, got an F.

“What’s clear as day is that the BBB does absolutely zero due diligence on the companies they grade. They mislead the consumer into believing some businesses are great when they in fact might not even exist, and that other businesses are frauds when they in fact are excellent businesses with a great track record of outstanding products, services and customer relationships. The sad part in all this is that the consumer is being ill served, and small businesses are being driven out of business (with the corresponding loss of jobs) in these perilous times, just so the BBB can line its pockets with ill gotten gains.”

Apparently the BBB rating wasn’t enough to spare Goldline a congressional investigation. Tuesday morning, Rep. Anthony Weiner (D-NY) announced that Congress is formally opening an investigation into Goldline and other “shady” gold dealers, with hearings likely to come at the end of the summer.