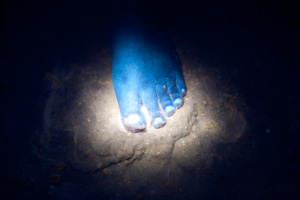 Rip Kirby’s got the 365-nanometer UV flashlight and I’ve got the shovel. He’s a grad student in the University of South Florida’s geology department, and we’re standing on Pensacola Beach in the middle of the night digging a hole so he can show me the layers of tar buried beneath new sand the tide has washed up. Some of the tar mat is so thick that it’s visible to the naked eye. Other traces of contamination are so subtle that they can only be seen with Kirby’s ultraviolet light, which makes crude fluoresce an unnaturally bright orange.

We trek around Pensacola Beach with the oversize light, illuminating oil everywhere: on decks, driveways, boardwalks, handrails. Blobs of it, smears of it, perfect imprints of footprints glowing neon, far beyond the waves washing oil from the Deepwater Horizon leak ashore. “The problem,” says Kirby, who works with USF’s Coastal Research Lab, “is that they’re not using proper decontamination practices in the cleanup. What they should be doing is stopping the workers at the edge of the contamination area”—the shore within the reach of the waves—”and having them get totally cleaned up or stripped down before they walk away.”

He complains about the machines that drive around collecting sand in giant sifters that are supposed to collect the tar balls while redepositing the pretty white sand. “But the sifters are breaking up the tar balls and spreading them all over the place,” Kirby says. “This operation and the traffic are spreading the contamination everywhere.”

The “traffic” would refer to tourists. Though Pensacola was hardly at full capacity this 4th of July weekend, there were plenty of beachgoers out. “We’re having fun at the Hampton Inn Pensacola Beach!” the reservations clerk at the Hampton answers. In the lobby, the lady in the asymmetrical top on HLN says the beaches are closed; past the blaring TV, families outside frolic in the emerald surf. As the hotel desk will tell you, the beach is indeed technically open. The Escambia County Health Department has erected some signs warning people to “avoid” swimming, and that children and pregnant women should avoid the area altogether. I drove down 15 miles of beach and saw only two such warnings. It’s definitely possible I missed some—they’re about the size of a sheet of computer paper. 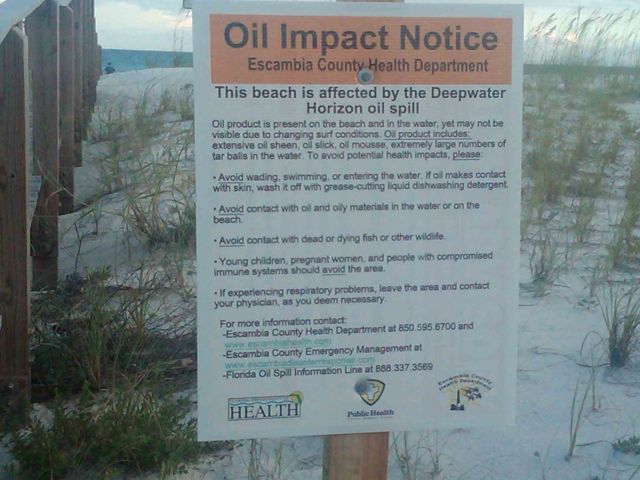 “Did y’all go swimming?” I ask a couple coming off the beach in swimsuits and towels. They did. Did they see this sign, I ask, pointing? They lean in closer. They didn’t. “Oh!” the woman says. “Well, lotsa people are swimmin’ out there, and it seems fine.”

It does. But for the tar balls, Pensacola Beach is still jaw-droppingly gorgeous. And the messages coming out of local government are confusing. The little signs on the beach say “oil product” is present and dangerous even if it’s not visible. But health department director John Lanza made comments to the Miami Herald urging people to stay out of the water only if they saw oil in it or felt it on their skin while swimming. He also said, “We are not advising that anyone go in the water,” right before he said, “If you really want to go into the water, you’re welcome to do that.” He admitted that the EPA hadn’t yet determined if the water is safe, but not that the University of West Florida Center for Environmental Diagnostics and Bioremediation is consistently finding crude in its water samples. Nor did he acknowledge that there appears to be no information available about the presence of BP’s dispersants, which, tourists may or may not know, with excessive repeated exposure can make your red blood cells explode.

The director of the Louisiana ACLU has pointed out that it’s nobody’s business to forbid you from rolling around in tainted sand if you’re so inclined, any more than government officials can slap a cigarette out of your mouth. But as with warnings on cigarette packs, it is government officials’ responsibility to make clear how seriously you could be compromising your health.

“Being on the beach will cause respiratory problems,” a woman at the Escambia County citizens’ information line told me. “A lot of people who’ve been in contact with the oil are having that.” When I ran that past the county public information officer, she said she had no idea what I was talking about, and that neither the EPA nor the health department had advised the county to shut down the beach. The Escambia County commissioner says he’s “not afraid to close the beach” if he gets “the right kind of information.” But, understandably, he doesn’t “want to err on the side of putting several people into bankruptcy.” One anonymous health department employee knows that Pensacola’s economics will continue to temper the official messages about possible health effects. “The only way this beach is going to close,” he admitted to a group of environmentalists, “is if it’s on fire.” In the meantime, the top of the Escambia Disaster Response web page announces, “The beaches are open and ready for business!”

And so, there are people everywhere, under the impression that they’re “fine,” picking up and spreading contamination, the full extent of which is visible only under Kirby’s UV light. One of the resorts has put up oil-washing stations on its beaches—not, according to the accompanying signs, for health reasons, but so you don’t bring it into the buildings. The pier is packed with tourists fishing. When I arrive there, someone has just caught a blacktip reef shark longer than me. I join the crowd to watch the fisherman wrestle it onto its side, pin it beneath his knees, and start stabbing it to death. Just a few yards further down the pier, another fisherman has snared another one, almost as big. He picks it up by the tail, and when I turn my face away before he can swing it face-first into a wooden post, I see that the guy watching next to me is also wincing.

“Yeah,” he nods, but then reconsiders, and relaxes his furrowed brow. “Though I guess with all this oil, it was just gonna die anyway.” 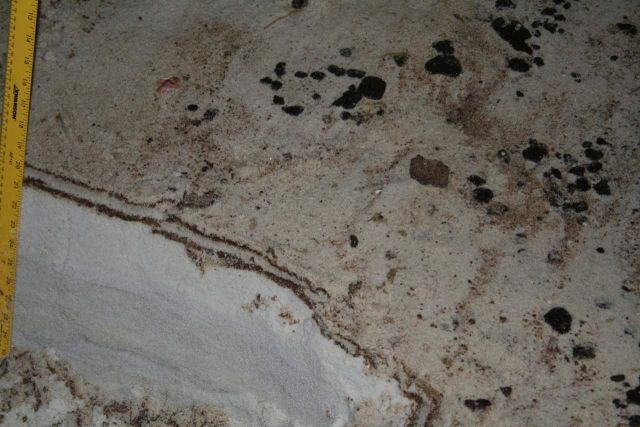 Layers of tar balls below the beach surface 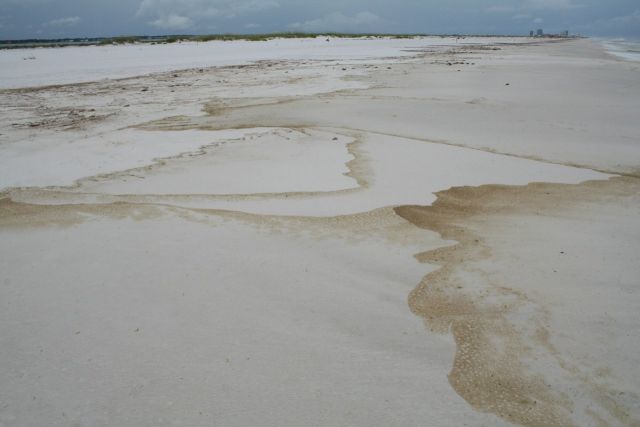 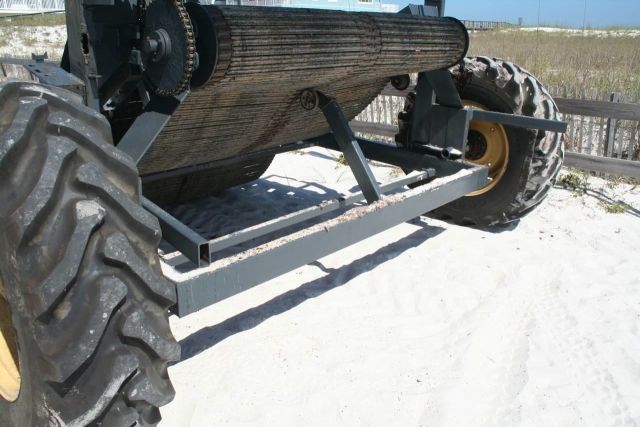 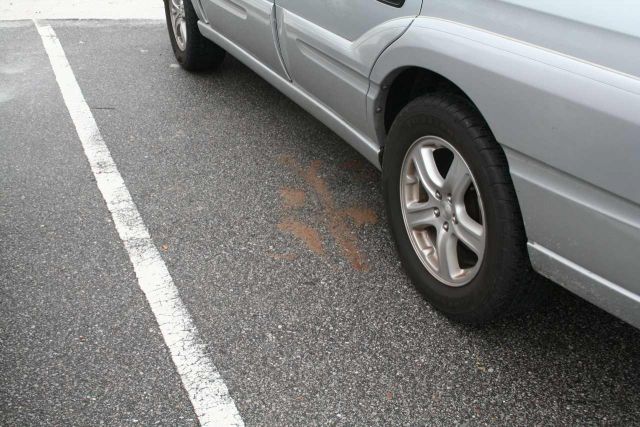 What Kirby calls “collateral contamination from human foot traffic” in a parking lot. There are no decontamination stations at most Pensacola Beach exit points.