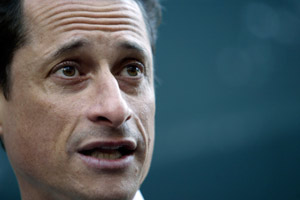 Glenn Beck’s favorite gold company is getting hauled up to Capitol Hill Thursday for a grilling over its allegedly deceptive business practices. And top on the list of questions for company officials is likely to be: Do you really think President Obama plans to confiscate people’s gold?

That members of Congress would be seriously considering such a question during a hearing is a sign of how strange the political times are. But concern over gold confiscation, once relegated to paranoid Beck fans, has gone mainstream, all thanks to the aggressive marketing and rapid growth of Goldline International. The California-based precious metals company is one of the largest sponsors of the right-wing talk radio and TV empire, especially Beck’s share of it. And scaring people about potential government gold confiscation is one of its most successful sales pitches.

As Mother Jones revealed earlier this year, Goldline’s salespeople frequently tout gold coins as a good investment—but not just any gold coins. As part of its standard telemarketing and sales pitch, the company urges customers to eschew government-issued bullion in favor of “numismatic” coins, which tend to be old European currency like the Swiss 20-franc piece. Such coins contains a tenth of the gold of a standard bullion, and Goldline marks them up 30-plus percent higher than the value of the gold in the coin, compared with a 5 percent markup on regular bullion.

To make the upsale to the overpriced coins, the company preys on people’s fears about the economy. Goldline’s sales staff suggests numismatic coins were exempt from confiscation in 1933, when Franklin D. Roosevelt issued an executive order making private gold ownership illegal—ergo, when Obama comes for your gold, the government won’t be able to take your Swiss francs. It’s an utterly ridiculous idea on its face. Nonetheless, Goldline includes in its standard “investor kit” a copy of the 1933 executive order that ended the gold standard in the US. The order exempted certain types of gold from the anti-hoarding provisions, including “gold coins having a recognized special value to collectors of rare and unusual coins.” Goldline claims its 20-franc coins and other semi-rare offerings meet this standard.

Rep. Anthony Weiner (D-N.Y.) has questioned Goldline extensively about these claims. As part of his office’s investigation into Goldline’s practices, which began late last year after Beck’s relationship with the company received heavy media scrutiny, Weiner asked the Congressional Research Service to examine how accurate Goldline’s interpretation of the 1933 executive order really is. The CRS reports lay waste to Goldline’s spin on history, as well as the assertions of the company’s sales staff that its overpriced coins would have been exempt from Roosevelt’s executive order.

According to the reports, the government today would have no reason to confiscate anyone’s gold, rare coins or not. The reason? The US parted completely from the gold standard in the 1970s, so the dollar is no longer linked to gold in the way it was in 1933. Back then, Roosevelt had to stop gold hoarding to stabilize the US currency. But today, even if the dollar went into a free-fall, confiscating gold wouldn’t do a thing to stop it. And of course, CRS notes, the president would only have such authority under extreme circumstances—a national emergency that almost always requires a declaration of war.

CRS’ research also shows that the 20-franc coins Goldline most often talks people into buying likely wouldn’t have escaped confiscation under Roosevelt’s order. That’s because Goldline’s most popular offering wouldn’t make the cut as collectables. CRS highlights a 1940 federal appellate case in which a guy was caught selling $20 gold coins without a license. The defendant argued that the coins were intended for collectors (as Goldline often does) and that he was exempt under the law from needing a license.

The court ruled that while people legally selling gold coins under the law’s exemption for rare collectables don’t have to be collectors themselves, they must be selling coins “because of the qualities of the coins and not because of the bullion value therein.” Goldline markets its 20 franc coins as an “investment,” pitching gold as a hedge against the falling dollar. By that measure, and the fact that many of the “numismatic” coins it peddles to low-budget investors aren’t that rare (they’re easily found on eBay), Goldline’s claims that its coins are a good defense against government confiscation are largely fiction.

Weiner and other members of the House Energy and Commerce committee—which is chaired by the notoriously hard-changing investigator Henry Waxman (D-Calif.)—will be digging into Goldline’s use of such revisionist history on Thursday.

The congressional investigation, along with legislation Weiner has introduced to impose stiffer regulations on the sale of gold coins, has sent Goldline scrambling to beef up its Washington lobbying presence. In recent weeks, Goldline has hired a fleet of lobbyists from the Prime Policy Group to fend off further regulation and to help it navigate the congressional hearing. It has also tapped the public relations firm Powell Tate to devise its defensive message.

But so far, Goldline’s new defense doesn’t sound that much different from its old one. According to a recent story in The Hill, Goldline executives have been meeting with various lawmakers and journalists and touting its “A+” Better Business Bureau rating. That Goldline is still using this argument suggests it doesn’t have much else to work with. Apparently it missed the news a few months ago that an intrepid blogger showed just how easy it is to buy an A rating from the BBB—when he got one for Hamas.

Still, Goldline may emerge from the hearing mostly unscathed. An alleged victim, Dr. Julius Bazan, will testify that Goldline convinced him to transfer $140,000 from his 401(k) into gold that turned out to be worth only $85,000. He will tell the committee that a Goldline rep promised him that the price of gold would eventually go up to $3,000 an ounce by the end of the year. (It is still hovering around $1,280.) But such stories tend to reflect as badly on the consumers as they do on the company. More importantly, though, as the company has already pointed out to the committee in written answers to questions, it has been disclosing what a rip-off its coins are in all its marketing materials for quite some time. The disclosure will be Goldline’s best defense. Weiner will have a hard time getting company executives off the message that consumers know what they’re getting.

Meanwhile, the bad press Goldine has received of late doesn’t seem to be making much of a dent in its business. The Los Angeles Times recently reported that the company was on track to rake in $1 billion in revenue next year. Revelations about Goldline’s controversial business practices don’t seem to have changed Beck’s opinion of the firm, either. After his big “Restoring Honor” rally last month in DC, Beck launched a new website called The Blaze. Goldline appears to be one of the site’s primary advertisers. It seems Beck doesn’t think a little congressional investigation is going interfere with his favorite sponsor’s ability to bilk the clueless people who watch his show.