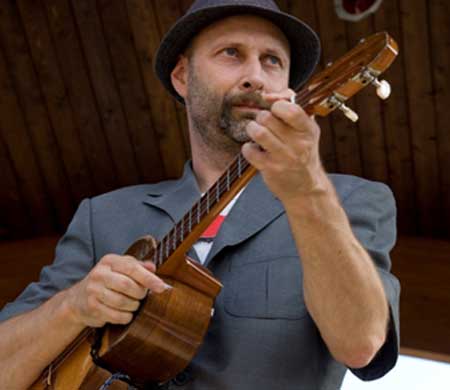 Imagine hiking in the Peruvian Andes and finding a group of chicha musicians: migrants playing a fusion of Cuban son, Andean melodies and psychedelic surfer rock, blended like the Inca corn whiskey the music is named after. These days, though, you might be more likely to encounter chicha—whose popularity peaked in Peru during the late-’70s/early ’80s—here in the United States.

That’s because Olivier Conan, a Brooklyn-based French musician, fell in love with chicha while on vacation in Peru, and managed to revive it at home by way of his six-man band Chicha Libre. (He sings and plays the Cuatro, a small four-string guitar.) What began as tribute music to the populist treasure of the Andean highlanders has picked up nuances from the international scene that has sprung up around Barbès, a South Brooklyn bar and community center co-owned by Conan and Chicha Libres guitarist Victor Douglas.

Barbès is also the name of Conan’s record label, which will release Chicha Libre’s new album, The Roots of Chicha 2, on October 12. Though technically a sequel, Conan calls it “an attempt to rectify some of the biases and inaccuracies of the first volume.” (It differs from the original by focusing on the form’s urban and Cuban influences, which have also influenced Chicha Libre.

Conan, meanwhile, is already on to his next project, raising funds for a documentary, Our Man in Iquitos: Pirate Radio, Politics and Chicha in the Amazon. The film will feature the life of Ranil, a Peruvian chicha pioneer and radio pirate turned populist politician. We caught up with Conan to talk about his music and the artists that inspire him.

Mother Jones: So, what’s your favorite release this year by an artist in your genre?

Olivier Conan: Not to sound difficult or pretentious, but I’m not quite sure what my genre is. If you mean chicha, the kind of chicha we play went out of style in Peru in the early ’80s. Nothing came out this year that I know of that would qualify as my genre. The closest thing, I guess, is a young band from Peru called Los Chapillacs that released a really good single and should release a full length album very soon.

MJ: What about outside of your genre?

OC: I have listened to so much Peruvian music this year that I have not paid as much attention to new music as I should have. There’s not really a new band I’ve liked that I can think of. There were some great compilations though, in particular on Analog Africa and Soundways. Legends of Benin was probably my favorite. Dengue Fevers presents Electric Cambodia was also great.

MJ: Now, originally, chicha music never gained a huge audience in Peru, correct? What do you think is making it more popular this time around?

OC: It’s true, it didn’t get a huge audience outside of the slums of Lima, where chicha was extremely popular in the ’70s and ’80s. I think the exotic factor probably played a big part in the regain of interest in the music. Photos of Indians with electric guitars have an aphrodisiac effect on most postcolonial music aficionados. And a sense, 30 years after the fact, that the music is some sort of important missing link between Latin music and Western rock. Something that one couldn’t grasp back then.

MJ: Why was the movement named after Peruvian corn whiskey?

OC: Chicha has been around for over 1,000 years. To indigenous Peruvians, it symbolizes pre-Colombian days. It’s very much a symbol of empowerment. In the late ’70s, chicha the music became the pride of the chicha-drinking Andean migrants who were moving in droves to Lima.

MJ: Is there still a large chicha music community in Peru, or does it mainly flourish in Brooklyn?

OC: In the poor neighborhoods of Lima, chicha is still very much alive. It’s music for the whole family (even though it does foster late-night drunken violence and suicide attempts), although the music is mostly viewed as old. New bands play in a different style. Brooklyn may be the only place where middle-class gringos are playing the music with a more or less vintage ’70s approach.

MJ: What are three records you never get sick of listening to?

OC: This from my , which is not all that representative. Stuff I intend to listen to. Stuff people give me. Stuff I want to use for whatever project. And stuff that landed on there sent by aliens I have never met. I did six because I just had to know… 1. Mexican Institute of Sound, “Jalale.” 2. Los Destellos, “El Poncho.” (I have hundreds of Destellos songs on my phone from working on the Roots of Chicha compilation.) 3. 3 Hurel, “Canim Kurban” (from an Anatolian Rock compilation). 4. Honore Avolonto, “Na Mi Do Gbe Hue Nu” (from Legends of Benin). 5. Irving Fields, “Hora Merengue.” 6. Franz Schubert (performed by Kathleen Ferrier), “Vier ernste Gesange, opus 12.”

OC: After years of therapy, I think I have finally gotten rid of the guilt factor. My standards have gotten really low. I stand by the worst. Joe Dassin’s “L’Eté Indien” would be one.

MJ: Any picks for the holidays?

OC: Not sure. The Kinks’ “Father Christmas”? “Navidad Negra”?

OC: “Esclavo y Amo,” by Los Pasteles Verde. The original version—a particularly cheesy ballad with thick reverb and syrupy Farfisa chords. I had it in my head all night. Got up at five in the morning (OK, I’m jet-lagged) without being able to rinse it off. I still have it in my head. It’s been over 24 hours. Help!