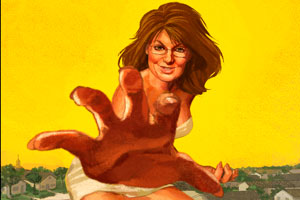 Even in an election season marked by more than the usual dose of insanity, Dinesh D’Souza’s Forbes cover story about Barack Obama, “How He Thinks,” marks a new low. You remember D’Souza—last seen blaming the left for 9/11, but best known for noting that “the American slave was treated like property, which is to say, pretty well” (and for dating both Ann Coulter and Laura Ingraham). He’d found, he said, an explanation for Obama’s “strange behavior”—bizarre stuff like noting that the BP disaster might have something to do with our addiction to fossil fuels.

The president, D’Souza assured Forbes readers, is neither “clueless” nor a socialist—the problem is something much, well, darker. “We have been blinded to his real agenda because, across the political spectrum, we all seek to fit him into some version of American history.” But that’s wrong, because Obama grew up in strange places “off the American mainland” (like…Hawaii), and is guided not by “the American dream” but the ideology of the Kenyan father he barely knew. “Incredibly,” D’Souza gasped, “the US is being ruled according to the dreams of a Luo tribesman of the 1950s. This philandering, inebriated African socialist, who raged against the world for denying him the realization of his anticolonial ambitions, is now setting the nation’s agenda through the reincarnation of his dreams in his son.”

What to say about this kind of tripe? (First, um: George Washington = anticolonialist.) That, like so much conservative rhetoric of late, D’Souza’s philippic seems designed to—in Chris Matthews’ phrase—rip the scab off American race relations? That for serial philanderer Newt Gingrich to tout this bilge as a “profound insight” has…a certain charm? But mostly, that it’s unfathomable why a conservative, but still mainstream, business magazine would publish something so reckless, false, and bigoted?

For a clue to the answer, consider a data point from the Congressional Budget Office (PDF). 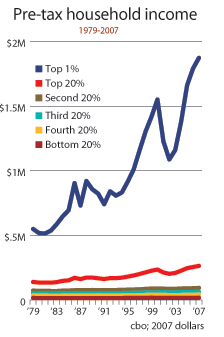 If you are in the bottom 80 percent of American households, you’ve gained essentially no economic ground in the past three decades. Those of you lucky enough to be in the top 20 percent ($100,000+) might be heartened by the trajectory of the red line on the chart shown here—but sorry: The vast majority of those gains have actually gone to the top 1 percent (PDF) (average income: $1.9 million). And though the chart doesn’t show this because the line would run off the page, if you’re in the tippy-top 0.1 percent, your gains make the merely filthy rich look like chumps. (Click here to see the change in income distribution. Pour yourself a stiff drink first.]

Obama isn’t proposing to radically redistribute these riches, mind you. Sure, he’s advocated letting the Bush tax cuts for the most affluent expire, bringing their tax rate back to where it was under Reagan (PDF). But that’s not why Forbes chose to demonize him; most of even its 5.4 million readers would not be affected. No, the reason Obama is being caricatured as some kind of latter-day Patrice Lumumba is simply that he took office at a dangerous moment for the wealthy and their enablers, coddlers, and bipartisan political minions. They faced the kind of backlash that has greeted corporate and political elites in the past when they’ve driven the economy off a cliff. (Consider that the Depression realigned our political tectonics in a way that lasted well into the 1970s.)

So, the defenders of the überrich pulled off an amazing bit of jujitsu. Just two years after the collapse, a vast percentage of those who got screwed are mad as hell—not at the bankers who did the screwing, but at a government that was left to clean up the mess. Anxious about feeling squeezed, they rail about being taxed (less, it’s worth recalling, than they were under Bush). Furious about what they have lost, they fume about those who have lost even more. Voila: Anger is not only being deflected away from the top, but deliberately redirected toward the bottom.

Read the “Attack on the Middle Class!!” package.

How’d that happen? It’s a sleight of hand that was made infinitely easier by the fact that we’d just elected our first black president. When you aim to convince Americans that in order to protect the common man’s pocketbook, we must hand over an even greater share of the nation’s wealth to the rich, it helps to appeal to our worst instincts. Mad at Wall Street mountebankers and their Capitol shills? We feel your pain… and hey, look, over there! It’s a black commie in the White House! (See also: ACORN. Shirley Sherrod. Michelle “Marie Antoinette”—a.k.a. uppity—Obama.)

You really have to hand it to Newt et al. This toxic propaganda neither solves the economic predicament of the people whose anger is being manipulated, nor advances the 200-year-plus debate about the role our government should play. What it does is undermine the founding anti-colonialists’ e pluribus unum mandate—by ensuring that the trend lines of economic inequality continue to diverge.