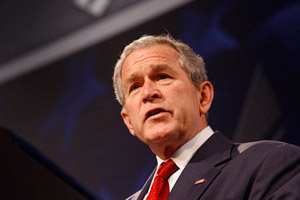 It’s official. George W. Bush’s selective and self-serving book is a best-seller. He sold 775,000 copies in the first week and the publisher has rushed to print an additional 350,000. The amount of debunking the book deserves could, well, fill a book. But there’s one trenchant portion of the book that reeks with hypocrisy. In discussing the absence of weapons of mass destruction in Iraq, Bush notes, “That was a massive blow to our credibility—my credibility—that would shake the confidence of the American people.” He then adds: “No one was more shocked or angry than I was when we didn’t find the weapons. I had a sickening feeling every time I thought about it. I still do.”

A sickening feeling every time he thought about it? Really? Let’s rewind the video back to a moment that crystallized the Bush-Cheney era. It was March 24, 2004. Washington’s political and media elite had gathered at the Washington Hilton for the annual Radio and Television Correspondents’ Association Dinner, which is something of a cousin to the yearly White House Correspondents’ Association Dinner. As thousands of DC’s swells enjoyed their surf-and-turf meal, Bush was the entertainment. The tradition is that at such affairs the president is the big speaker, and he has to be amusing, poking fun at himself and his political foes.

Bush was no fan of such gatherings, and he and his aides had decided he ought to narrate a humorous slide show, instead of doing a stand-up routine. Large video screens flashed pictures of him and his aides, which he augmented with funny quips. One showed him on the phone with a finger in his ear. He explained this shot by saying he spends “a lot of time on the phone listening to our European allies.” There were humorous bits about his mother and Dick Cheney.

Then Bush displayed a photo of himself looking for something out a window in the Oval Office. His narration: “Those weapons of mass destruction have got to be somewhere.” The audience laughed. But the joke wasn’t done. After a few more slides, there was a shot of Bush looking under furniture in the Oval Office. “Nope,” he said. “No weapons over there.” More laughter. Then another picture of Bush searching in his office: “Maybe under here.” Laughter again.

Bush was actually joking about the missing weapons of mass destruction. He was making fun of the reason he had cited for sending Americans to war and to death, turning it into a running gag. His smile was wide and his eyes seemed bright, as the audience laughed. At the time I wrote,

Few [in the crowd] seemed to mind. His WMD gags did not prompt a how-can-you silence from the gathering. At the after-parties, I heard no complaints.I wondered what the spouse, child or parent of a soldier killed in Iraq would have felt if they had been watching C-SPAN and saw the commander-in-chief mocking the supposed justification for the war that claimed their loved ones. Bush told the nation that lives had to be sacrificed because Saddam Hussein possessed weapons of mass destruction that could be used (by terrorists) against the United States. That was not true. (And as [WMD search team leader David] Kay pointed out, the evidence so far shows these weapons were not there in the first place, not that they were hidden, destroyed or spirited away.) But rather than acknowledge he misinformed the public, Bush jokes about the absence of such weapons.

In yet another act reminiscent of Soviet-style revisionism, Bush in his book does not mention this dinner and his performance there. If he indeed felt ill whenever he pondered the missing WMDs—as he insists in his memoirs—how could he turn this into a crass punchline? Asking that question provides the answer. He is fibbing in his book. Moreover, this small episode is proof of a larger truth: Bush’s chronicle is not a serious accounting of his years as the decider. As for the hundreds of thousands of readers who shelled out $35.00 for the book, expecting the former president to level with them, the joke is on them.