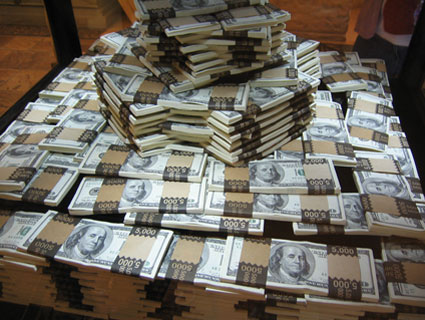 Not so fast, James Bopp. In a rebuke to the influential conservative lawyer and Republican National Committee member, lawyers for the Federal Election Commission have deemed his plans for a game-changing new breed of super-PAC illegal.

Bopp had envisioned a novel strategy for the group, created in May and dubbed Republican Super PAC, that would allow it to circumvent political spending limits by using elected officials to fundraise for the PAC. My colleague Stephanie Mencimer outlined Bopp’s plan last month:

Say House Speaker John Boehner (R-Ohio) approaches the CEO of Exxon for a contribution to his reelection campaign. Under federal law, the CEO can only give Boehner $2,500. In the past, that’s the end of the conversation. But Bopp’s plan envisions Boehner and his campaign asking that same donor—and his company—to pony up more money, as much as he wants, for the Republican Super PAC. The donor can even specify that the money be spent supporting Boehner or attacking his opponent. Then Bopp’s PAC can buy ads, send out mailings, canvass neighborhoods, and do all the other things a political campaign typically does on Boehner’s behalf.

Bopp, you might remember, was the driving force behind the Supreme Court’s Citizens United ruling, a decision that opened the door to unlimited corporate campaign donations and reshaped the political playing field. The decision was a victory long in the works for Bopp, who for decades has chipped away at the nation’s campaign finance regulations.

While campaign finance law forbids PACs from coordinating with candidates and elected officials about how they spent their money, Bopp claimed the law didn’t prevent officials from raising money for PACs like his. “The different thing here with our PAC is that we are going to harness the political fundraising of candidates and parties,” he told Mother Jones last month.

Campaign finance reformers immediately cried foul. In a statement to reporters, the presidents of two pro-reform groups said, “In our view, the proposed efforts of this RNC ‘shadow group’ would violate multiple provisions of the federal campaign finance laws.” A few days after Mother Jones first reported the existence of Bopp’s “super-duper” PAC, attorneys for two Democratic political action committees demanded that the FEC rule on the legality of Bopp’s new scheme. If the FEC upheld Bopp’s plan, Democratic operatives had every intention of using the strategy themselves.

Last week, the campaign finance watchdog’s top attorneys quietly released a draft opinion declaring that Bopp’s plan violates campaign finance law. Specifically, the attorneys pointed to the McCain-Feingold law, which bans elected officials and candidates from soliciting “soft money,” or unlimited campaign contributions, in connection with a federal election. The attorneys added that it’s OK for federal officials to appear and speak at fundraisers where unlimited cash is being raised, so long as they don’t directly solicit it themselves.

Tara Malloy, associate legal counsel at the Campaign Legal Center (CLC), notes that the ban is hardly a done deal. On Thursday, a majority of the six-member FEC must approve the opinion to truly put it in place. Given the paralysis that has gripped the commission in recent years, there’s no guarantee of a consensus. What’s more, the FEC’s three conservative commissioners have more frequently spurned the advice of the commission’s lawyers than in years past, according to former Democratic FEC chair Scott Thomas. “For almost the entire history of the FEC, the commissioners were open to receiving recommendations from the staff,” he said earlier this year. “Now they are being stopped cold by those three commissioners.”

For his part, Bopp says it would be a mistake for the FEC to approve the opinion. However, he believes there’s at least one way to get around such a ban—namely, by using party officials and lawmakers who are not running for re-election to ask for unlimited donations in a “personal” rather than an “official” capacity. (Candidates, he added, wouldn’t be able to do this.) As he explained it:

Bopp, who has received lots of interest in his new PAC, believes the FEC’s draft opinion would impose an outright ban on lawmakers and party officials fundraising—in an official capacity at least—for super-PACs. In his opinion, this would put someone like Senate Majority Leader Harry Reid (D-Nev.) in a tight spot. Reid blasted out an email last week soliciting money for a Democratic super PAC created to keep the Democratic majority in the Senate. In it Reid asked for donations—but no more than $5,000 (the annual contribution limit for individuals) and he was soliciting the contributions from small donors, not corporations or labor unions. “If they approve this [opinion]…Reid will have violated the federal election law,” Bopp claims.

Wertheimer says Bopp is wrong—again. Elected officials can ask for donations to super-PACs within legal limits, he insists, even if the FEC’s opinion is approved. “Jim Bopp is blowing as much smoke and clouds as he can,” Wertheimer says, “to try and do something that we believe is blatantly illegal.”