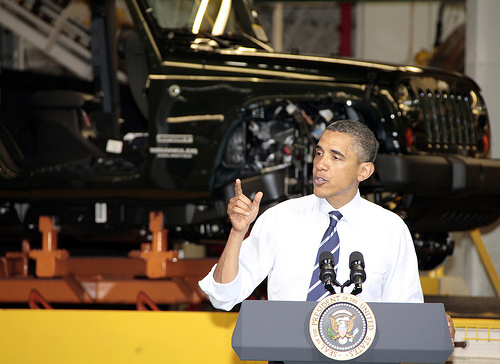 That was fast. The boost in President Obama’s approval ratings following the killing of Osama bin Laden last month has melted faster than a popsicle on a summer day in Abbottabad. Now Americans, by a two to one margin, say the nation is headed in the wrong direction, according to a new Washington Post/ABC News poll.

To no one’s surprise, Americans are most pessimistic about the health of the US economy, the poll found. A staggering 90 percent of respondents view the economy negatively, and nearly 60 percent say the economic recovery hasn’t even begun. It’s not hard to see why: job growth is underwhelming, the unemployment rate is 9.1 percent, long-term unemployment (out of work six months or more) is worse than in the Great Depression, youth unemployment is through the roof, the housing market is bottoming out (again), and on and on. So gloomy are recent economic indicators that talk of a full-blown double-dip recession has picked up.

President Obama received equally dismal marks on his handling of the US deficit, with 60 percent of respondents rating him poorly. But here’s the figure that’ll keep Obama’s 2012 campaign advisers up at night: Among political independents, that coveted bloc of voters who play an increasingly vital role in American elections, almost 66 percent criticize Obama’s handling of the economy. Within that independent bloc, a majority of independents “strongly” disapprove of Obama’s economic policies, a first in a Washington Post/ABC News poll during Obama’s tenure.

There’s some good news in the new poll for Obama and his team. Stacked up against six 2012 GOP presidential hopefuls, Obama enjoys stronger backing than five of them. He is, however, tied with former Massachusetts governor Mitt Romney, largely seen as the GOP frontrunner and a candidate who’s made economic issues his number one issue.

This poll hammers home what was already known: that Obama’s weakness is the economy, and that, barring a miraculous turnaround for the US labor force, a candidate who runs an economy-heavy campaign will pose a serious threat to Obama’s re-election. Granted, as New York Times data wizard Nate Silver recently noted, the relationship between the jobless rate and re-election is “maddeningly inexact”—that is, there’s no threshold or single figure that dooms a president’s re-election bid. But gloomy approval ratings like these and an economy that simply doesn’t work for most Americans right now leaves President Obama with the mightiest of obstacles between now and November 2012.