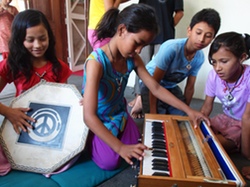 Not many New Orleans buskers who’ve been working the streets as long as Grandpa Elliott has (60 years) will ever perform for a crowd of 15,000—in Morocco no less. But film producer Mark Johnson and his Playing For Change Foundation has been making such unlikely events happen. For the past decade, Johnson has been globetrotting with recording equipment and a vision: to bring far-flung musicians together, sometimes through technology, sometimes face-to-face. Out last week, his second CD/DVD release, entitled Playing for Change: Songs Around the World Part 2 (PFC2), is part of his ongoing quest to re-create world music, as Johnson told Mother Jones in a 2009 interview.

PFC2, like it’s 2010 predecessor, features 150 musicians from 25 countries collaborating on a variety of classics like Bob Marley’s “Three Little Birds,” John Lennon’s “Imagine,” and Stevie Wonder’s “Higher Ground.” Johnson records and films the musicians playing outdoors on their home turf—a washpan player on a New Orleans’ sidewalk, a drum circle of Zuni Indians. But each records his tracks to complement ones already recorded by fellow musicians hundreds or thousands of miles away.

This setup allows the musicians “to play where they’re most natural, where there’s no separation between them and the people” who are walking by, Johnson says. “It’s a great way to connect.” And connection is the point here. With this second collection of songs, Johnson’s aim was linking cultures that developed along slave-trade routes—tracing a musical heritage from West Africa to Cuba and New Orleans, and then working down through Latin America. The songs were chosen based on what he felt would translate best along that route.

Some of the artists include Indian double-violinist Gingger Shankar, Japanese udu (a type of drum) player Yu Hatakeyama, and Spanish flamenco guitarist Niño Josele. And not all songs are covers. For example, one number was developed under a mango tree in Mali with a very simple groove in the key of G—thus the title: “Groove in G.” And “Satchita,” by Enzo Buono, may be the first-ever linguistic mishmash featuring Portuguese lyrics and Sanskrit choruses set to a backdrop that includes everything from Binho, a Brazilian xequere player, to India’s N. Mohana Raman, who plays the mridangam.

In one instance, musicians were brought together from groups that, in another context, might well be trying to kill one another. “La Tierra del Olvida” (“Land of the Forgotten”) unites 80 Colombian musicians. The voices of paramilitary soldiers drift alongside those of a 30-piece youth orchestra made up of war victims.

But practically speaking, how does music stimulate healing? “People see that this is how they’re going to be represented,” says Johnson. “That’s the biggest source of pride for a culture.” This pride, in Johnson’s view, encourages people to get involved in their communities, and then with their governments, and then in the global community. Then there’s the Malian koora, a stringed-instrument designed to create a peaceful mood in advance of a resolution process.

Beyond donations and CD sales, Johnson’s Playing for Change Foundation raises money by staging benefit concerts featuring some of his core players, which is how Grandpa Elliott ended up in Morocco. The proceeds are used to build music schools in depressed or war-torn regions. So far there are seven PFCF-supported schools in Nepal, Colombia, and Mali—and Johnson says three more are in the works. The schools strive to sustain their own programs, in some cases by manufacturing traditional handicrafts and instruments. When you’re building a family, Johnson explains, “you have to leave the place you visit better than where you found it.”

Here’s the video for “Groove in G“…