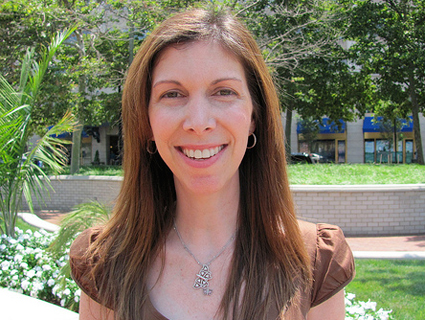 Dana Weinstein chose to terminate her pregnancy when she learned the fetus suffered from a severe brain disorder.Photo: Kate Sheppard

When Dana Weinstein talks about her second child, she refers to her “angel baby.” In the summer of 2009, with a 2 1/2-year-old son and a daughter on the way, the Weinsteins were looking forward to completing their family. Then tragedy struck. After a sonogram 29 weeks into her pregnancy, Weinstein learned  her daughter’s brain hadn’t formed properly and that the baby would face severe health and mental problems, if it survived at all. Several weeks later, she made the painful decision to end the pregnancy before “Baby W” was born. Now Weinstein fears that if Republican legislators around the country succeed in banning abortions after 20 weeks, many women in similar situations will no longer have the option that she did.

I spoke with Weinstein on a Friday afternoon last month via phone. She was home in Rockville, Maryland, and her seven-month-old, Danica, could be heard crying in the background. Weinstein, who works in development, cooed at Danica, who was born a little over a year after the loss of “Baby W.” Weinstein decided to tell me her story after reading about the new state laws—many without exceptions for cases where the health of the mother or the baby is at risk—that have made abortions after the 20th week of pregnancy illegal.

Weinstein learned of the problems facing her baby just weeks after George Tiller, a Kansas doctor who was one of the few in the country to offer late-term abortions, was gunned down in his church by an anti-abortion extremist. She remembers watching the news coverage that May. “I sat there rubbing my belly thinking, ‘I don’t know how anybody this late in the pregnancy could have an abortion,'” she remembers. “That was my entire attitude.…I was always for the right to choose, but I didn’t understand why someone would have a late-term abortion.”

A few weeks later, Weinstein understood. On June 26, 2009, she went in for a routine sonogram to check the progress of “Baby W.”

The sonogram detected abnormalities. The technician noted that the ventricles in the baby’s brain were enlarged and that the fetus seemed to be having difficulty swallowing. An MRI several weeks later confirmed that the baby suffered from multiple malformations of the brain. The connections between the right and left brain had not formed, a condition called agenesis of the corpus callosum. The baby also had polymicrogyria, a severe brain condition where the ridges don’t form properly, which can cause intellectual and physical disabilities, as well as seizures that are “difficult or impossible to control with medication,” according to the National Institutes of Health.

“We noted a number of different brain malformations,” explains Rhonda L. Schonberg, the coordinator at the Center for Prenatal Evaluation at Children’s National Medical Center in Washington, DC, where Weinstein was given the diagnosis. “Her fetus was really at a significant risk for developmental delay and seizure disorder.” It was a rare diagnosis, and it’s unclear what caused it, Schonberg says. It is also a condition that was not clear in Weinstein’s 20-week checkup; most brain development occurs in the third trimester, so it would have been difficult to foresee this earlier in the pregnancy.

Weinstein was faced with the prospect of giving birth to a baby that was expected to suffer from nearly constant seizures, could have required feeding tubes to stay alive, and could have been in a vegetative state, if it survived at all. She decided to end the pregnancy rather than continuing for another two months and prolonging the suffering. It was a very personal decision, she says, one made between her, her family, and her doctors. “We wanted her and loved her,” Weinstein says. “In some ways I feel a little bit lucky, in that she was so sick that the decision was almost made for us. I don’t wrestle with guilt.”

Even though she lived in Maryland and saw a doctor in Washington, DC, Weinstein found it difficult to obtain an abortion so far along in her pregnancy. There were no doctors, at the time, that offered the procedure at her stage in the Washington area. She had to travel to Dr. Warren Hern’s clinic in Boulder, Colorado, far from her support network. Weinstein spent a week in Colorado between the initial visit with the doctor and the actual procedure, all the time worrying that the baby was suffering. It wasn’t until July 14 that she was able to undergo the procedure. “I don’t have words to describe the agony of those days,” she says. But, “knowing how sick the child was, I can’t imagine ever being forced to carry the baby to term.”

The ordeal was expensive. The Weinsteins racked up $17,500 in medical bills, and it took a lengthy fight with their insurance company to get the procedure covered. There was also airfare and the hotel stay to cover. Seeing the difficulties a woman who decides to end a pregnancy faces in doing so, even in a state where abortion is legal after 20 weeks, was one of the reasons Weinstein felt compelled to share her story.

That anti-abortion groups have premised their 20-week bans in a number of states on “fetal pain” ignores the fact, Weinstein says, that in her case she sought to end the suffering of her baby. “I’m not going to be made to feel ashamed because I allowed her to have a peaceful death,” she says.

It was only later that Weinstein and her husband found out that “Baby W” was a girl. Weinstein, a petite woman with long brown hair, now wears a necklace with a butterfly pendant. A smaller butterfly with ruby-studded wings dangles from it, the birthstone for July—the month Baby W died. A photo of her seven-month-old is affixed to the back of her work ID.

Abortions like Weinstein’s are quite rare. Only 1.4 percent of all procedures occur at 21 weeks or beyond, according to the Centers for Disease Control. Most of those procedures happen because a life-threatening medical problem or a fetal abnormality only became apparent at a later date. But even in Washington, DC, there are few options for women in Dana’s situation who seek an abortion. Hern’s office was the closest clinic for late-term abortions when Weinstein obtained her procedure, though another provider has since opened an office in Maryland.

With the additional barriers that anti-abortion activists have erected around the country, Weinstein worries about other women in her position. “Abortion is a right, and if that right is taken away, people like me won’t be able to make the choice that is right for their child in pain,” she says. “I couldn’t sit back and watch women’s rights be chipped away by people who have never walked in these shoes.”