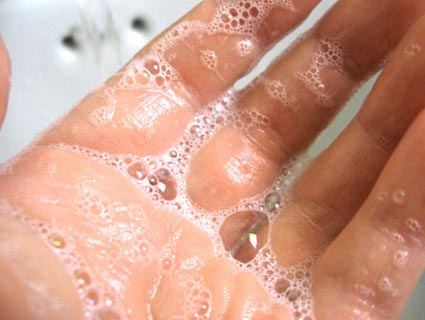 Earlier I blogged about the soap lobby’s giant campaign to convince consumers that anti-bacterial products are safe, effective, and totally necessary, despite the fact that the science says otherwise. Well it turns out that industry has an ally in right-wing groups who argue that an EPA ban on anti-bacterials would bring us one step closer to a “nanny state”—and an anti-feminist one at that. Herewith, a few examples of the campaign:

Americans are living longer than ever due in large part to advancements in science, but you wouldn’t know it from listening to the wailing and gnashing of teeth by environmental extremists. It seems that every day brings news of some substance that will maim, injure or bring about Armageddon. The latest target of these extremists is the antibacterial agent Triclosan, a substance used safely and effectively for decades by millions of Americans.

Our friends in the government have decided to improve our lives again by trying to get rid of anti-bacterial products. You know them—the gels, wipes, and soaps that we use to disinfect shopping cart handles, gym equipment, children’s toys, phones, hands—you name it. Anti-bacterials contain Triclosan and Very Concerned Citizens think that Triclosan is a Very Bad Thing. So they want it banned.

Americans for Tax Reform weighs in:

Both the FDA and EPA have a spotty past of overstepping their authorities to push aggressive and careless policy in the absence of legislative support for particular agendas. Indeed, recognizing the unsavory nature of his latest ploy to handicap consumer choice, Rep. Ed Markey has been pushing both the FDA and EPA to undertake efforts to ban an important antibacterial chemical used in antibacterial soaps, a product which research shows is used by nearly three-quarters of Americans. Clearly moving to eliminate a product used by almost 75 percent of Americans should be based on evidence stronger than speculation. None exists, and research clearly shows Americans would prefer being free to choose these products rather than being restricted by regulatory caprice.

And finally, here’s my very favorite: a piece from the website Human Events (check out the seriously awesome picture of a raving enviro hippie) that argues that an EPA ban on triclosan would amount to a “war on women:”

A woman’s dream, on the other hand, is to lead an efficient, clean, healthy life, free of arrogant do-gooders’ relentless meddling.  Yet meddling is national sport for environmental elites, and their regulatory schemes steal women’s time and increase their workload and stress.

Well now. I beg to differ. What increases my personal stress level is having to worry about a potentially harmful ingredient lurking in my soap, toothpaste, and deodorant. And my dream? That after 37 years of foot-dragging on triclosan, regulatory agencies will quit listening to industry griping and make a decision based on science.