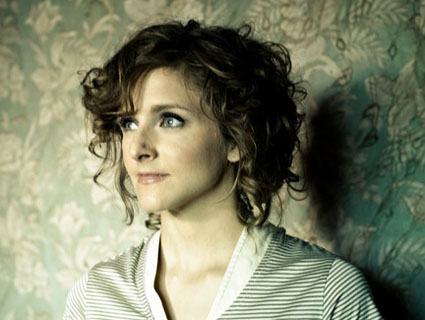 “The first day I stepped forth in this fair country,” Abigail Washburn‘s breathy voice wafted down over the grass, “border man took my paper, told me I would be free.” A slight figure dressed in black gossamer, Washburn looked rather elegant when I caught her live at San Francisco’s Hardly Strictly Bluegrass festival. The crowd below lay drowsy and peaceful in the mid-morning sunshine, ready to be transported to wherever the singer wanted to take them.

And transport them she did. While the clawhammer banjo queen can fit right in at a hoedown like Hardly Strictly, she’s become just as comfortable entertaining crowds on the other side of the globe. A Mandarin speaker and self-declared Sinophile, she’s made a career out of bringing bluegrass to the far corners of China—and by the same token making Chinese folk music accessible to American bluegrass fans. Themes of migration and boundary-crossing pop up in her songs, as with the abovementioned tune, “Dreams of Nectar.”

Washburn first found herself in China during college as part of an intensive language program, but was overwhelmed by the severe pollution and the masses of people trying to sell her goods or practice their English on her. But back in the states “I just couldn’t handle myself,” she recalls. “I was disenchanted with 1.3 billion people on the face of the planet. Not okay. Not okay.”

So she vowed to give China another try, and this time she fell in love. Fate directed her to Nashville for the time being, though, where she delved into learning the banjo. While jamming at a bluegrass conference, she drew attention and was offered a record deal right away. After making a name for herself in Nashville, Washburn began touring China as often as she could, playing at festivals and collaborating with Chinese instrumentalists from Shanghai to Tibet. She played at the 2008 Olympics in Beijing, worked on a pop electronica record called Afterquake in Sichuan, and frequently picks with three female musicians at the Chinese Conservatory. In November, she’ll embark on a State Department-sponsored “Silk Road Tour” along with several other American musicians.

“I got these shoes from a railroadin’ man,” Washburn sings, “and the dress is from a rider in the mine.”

Washburn—who’s married to (and frequently performs with) banjo maestro Béla Fleck—has a unique way of making old-timey tunes suddenly contemporary. For the title track of her latest album, City of Refuge, she initially drew inspiration from a folk song called “Hot Pie.” The lyrics, which she sang to me over tea backstage at Hardly Strictly, remind me of some Western town in the early 20th century: “Where do you get them high top shoes, and the dress you know you wear so fine? I got these shoes from a railroadin’ man, and the dress is from a rider in the mine. Oh, hot pie, hot pie, hot pie, my loo, loo girl.”

“If you heard the banjo going along with those words, it’s a bit minor, a bit modally,” she says. “So I was like, I just need to write something with this tuning.” She discovered her own words for the song after listening to Blind Willy Johnson’s “City of Refuge,” and pondering her own paradise. The result, a climactic folky pop song, alludes to a place of refuge, but Washburn is purposefully vague about whether such a city exists for her. “The search itself is sacred,” she tells me placidly. “If you can find refuge in every moment, then there it is.”

Her songwriting style also stems from merging old and new, East and West. On “Dreams of Nectar” Washburn drew her opening line out of old ballads from the British Isles, many of which begin with, “The first day I set foot in this country.” And the melody for this stripped-down, haunting tune “is very connected to an old British folk song called ‘Cherry Tree Carol.'” In this case, the words came to Washburn after an experience she had with a Chinese immigrant in Montpelier, Vermont. Her years of struggling to learn Mandarin made her empathize with immigrants in the local China Star restaurant, so she threw herself into giving them English lessons a couple times a week. “I got to know their stories,” she says. “They all came to America looking for something better. They were hoping some day to bring their families over. And it just didn’t happen for them.”

One older man, who found English especially troublesome, came to Washburn one day crying with a letter from his wife in hand. “She wrote, ‘You’ve been in America four years, and I don’t think you’re coming home; we’re going to start a new life without you,'” she recalls. “And the whole reason he was in the states was for them. That story was heavy on my mind when I wrote this song.” The song’s last line, drawn from the Chinese writer Ha Jin, evokes the desire to reach a place of refuge: “Before I die grant me one thing, don’t let me dream of nectar, make me the fruit on the tree.”

Sample tweet: “Suggestions for famous Tibetan or Uighur songs that our band should learn for our Silk Road Tour?”

As Washburn continues to straddle two nations with entirely different mentalities and musical traditions, she has eased into the role of crooning diplomat. She serves as a distinctive voice reminding both cultures of the other. For example, she recently tweeted: “Suggestions for famous Tibetan or Uighur songs that our band should learn for our Silk Road Tour?”

But she’s also made peace with the fact that she can only do so much to spread cross-cultural awareness. “I spent all of my twenties feeling very angsty about trying to make a difference,” Washburn admits. “I wanted to establish a touring circuit that would revolutionize the way subculture music was received in China. But now I’m older, and I don’t feel as strongly about having a distinct mission. There’s a lot at play in this world, and I know I’m a tool of some sort.”