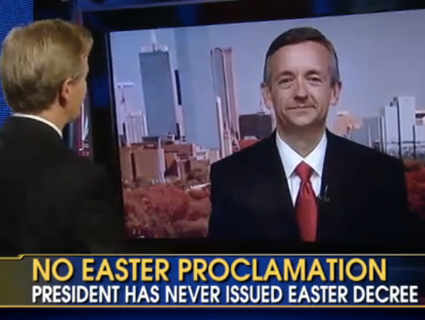 Dallas Pastor Robert Jeffress said in April that Americans had good reason to suspect that President Obama is a Muslim.<a href="http://www.youtube.com/watch?v=eDK6iEfY2TI&feature=player_embedded#at=64">Fox News</a>/YouTube

Dallas pastor Robert Jeffress, as you might recall, endorsed Rick Perry on-stage at Friday’ Values Voter Summit in DC with Perry’s approval, and then proceded to call Mormonism a “cult” and argue that Mitt Romney’s faith was a strike against him as a candidate. Mitt Romney has since called on the Texas Governor to repudiate Jeffress’s comments, and the Perry campaign has responded by essentially shouting “Romneycare!” really loudly.

But Jeffress has taken shots at more than just the LDS Church. He also said that Islam causes pedophilia, and that the Catholic church and Jewish faith are both paths to eternal damnation. He’s speculated as to whether President Obama is a Muslim. Here’s an interview Jeffress did with Steve Doocy of Fox News, back in April, after President Obama (like President Bush before him) declined to produce a formal White House proclamation celebrating Easter. Why would Obama do something like that? Jeffress, starting at about the 53-second mark, says it mights be because he secretly still harbors Muslim sympathies:

Steve, let’s look at what’s really going on here. On the one hand we have a President who never met a Muslim holiday he didn’t like, or at least wasn’t willing to issue a proclamation for, and on the other hand here he is refusing to acknowledge publicly the most important event in Christian faith—the resurrection of Jesus Christ from the dead. And yet the White House is wondering: Why do 20 percent of Americans believe the President is a Muslim? Well as my kids would say, “Duh!” It’s actions like these that really make people wonder what it is the president really believes.

To Jeffress, there were two “deeply troubling” scenarios at play: Either Obama just has really bad advisers, or “there’s something deep within the president himself that will not allow the him to issue these public proclamations about Christianity when he on Easter will issue a proclamation about Earth day, or he will recognize Muslim holidays.”

Meanwhile, the watchdog group Americans United for the Separation of Church and State filed a formal complaint with the IRS on Tuesday alleging that Jeffress’ violated his church’s non-profit status by posting a video of himself endorsing Perry on his church’s website.