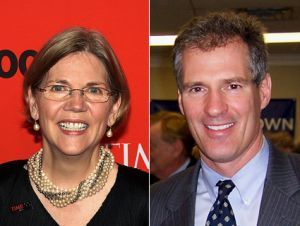 On Tuesday, iWatch’s Peter Stone reported that the GOP groups American Crossroads and Crossroads GPS, which are affilaited with Karl Rove, expected to raise and spend $150 million to recapture the Senate for Republicans in 2012. Crossroads GPS has been on the air in Montana for a while now, and on Tusesday it began what is likely to be an extended and very expensive campaign to take Massachusetts Senate candidate and Consumer Financial Protection Bureau architect Elizabeth Warren down a notch.

Noah Bierman reports that Crossroads GPS is targeting Warren with a $560,000 ad buy, attempting to define her as the candidate of the increasingly unpopular Occupy Wall Street:

These charges, that Warren is closely aligned with “extreme left-wing protests,” are quickly becoming conservatives’ primary line of attack against Warren, who was recently featured in a Massachusetts GOP spot as the “Matriarch of Mayhem.” It all comes down to one quote, in an interview with the Daily Beast, in which she suggested (not entirely without cause) that she provided some of the “intellectual foundation” for the Occupy movement. There was a lot more context to that argument, as Dave Weigel helpfully notes, but it’s given Republicans plenty to work with.

And Rove isn’t the only one raising and spending a ton of money. On Warren’s side, the League of Conservation Voters is dumping $3 million into an anti-Brown ad campaign (including an airplane banner at Sunday’s Patriots game). And Warren is preparing a pretty significant campaign of her own. Jim O’Sullivan reports:

Warren raised over $3 million in the last quarter, and is getting financial help from a super PAC – the newly created Rethink PAC – organized by labor and former aides to Massachusetts Gov. Deval Patrick. Brown, for his part, has a flush campaign account of his own, with $9.6 million cash-on-hand at the end of September.

Brown finance director John Cook told committee members that Warren would likely spend between $18 million and $20 million on the race. Outside groups, he said, would likely drop another $25 million. Brown’s camp says outside groups have already spent over $3 million against Brown.

If you didn’t have a calculator handy: Brown expects Warren and her allies to spend about $50 million. Brown and his allies, presumably, will want to spend a similar amount—which means we just might have a $100 million Senate race. Same goes for Ohio, too. Welcome to the post-Citizens United universe.