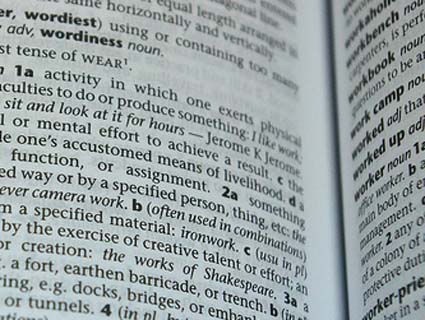 Houghton Mifflin’s latest version of the American Heritage Dictionary includes the derogatory term “anchor baby” as one of its newest words. That’s not really the problem. The problem is that it regarded (at least initially) the term as value-neutral, rather than as a slur used to dehumanize the children of undocumented immigrants as little more than a strategy for getting a green card.

The term “anchor baby” was defined as “a child born to a non-citizen mother in a country that grants automatic citizenship to children born on its soil; especially such a child born to parents seeking to secure eventual citizenship for themselves, and often other members of their family.” As Colorlines’ Jorge Rivas pointed out, the dictionary’s editor, Steve Kleinedler, went on NPR two weeks ago and said that this was an example of the American Heritage Dictionary defining a term “objectively without taking sides and just presenting what it is.” This would be like defining “broad” as “a member of the female sex.” Unsurprisingly, however, the American Heritage Dictionary shuns “objectivity” on this point and appropriately refers to the use of the term “broad” in this fashion as “offensive slang.”

“Anchor baby” is used almost exclusively to delegitimize the claims of citizenship granted to the children of undocumented immigrants under the Constitution. The “anchor baby” slur relies on two particular myths, the idea that having an American citizen child is an automatic shield against deportation and the notion that people come here just to have children. According to the Pew Hispanic Center, 91 percent of unauthorized immigrants in the US who had children in 2009-2010 came her before 2007. Having a child who is a citizen is hardly a certain path to citizenship either—the parent would have to wait till the child was 21 to sponsor them.

To Kleinedler’s credit, following a post by the Immigration Policy Center’s Mary Giovagnioli explaining the origins of “anchor baby,” he said that “we will be adding a label to the term, either derogatory or offensive, which I acknowledge should have been done in the first place.” Now maybe the American Heritage Dictionary can get started on “waterboarding.” In a move reminiscent of the New York Times, which ceased to describe waterboarding as torture after the US started employing it as an interrogation method, the dictionary refers to this practice as being “widely considered a form of torture.” And you thought false objectivity that blurs more than it clarifies was just a mainstream media thing.