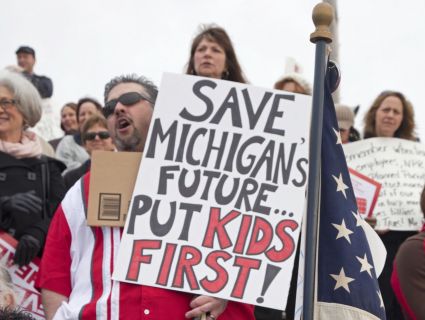 Welcome to education reform in the state of Michigan, where a Republican-dominated Legislature and a GOP governor are pushing one of the broadest anti-union, pro-privatization agendas in the country. Michigan is grappling with budget shortfalls like other states including Wisconsin, Ohio, and New Jersey—all places where GOP leaders (and occasionally Democrats) are exploiting the economic downturn to launch an ideological assault on teachers’ unions and public school systems. Although some of Michigan’s legislative attempts to overhaul public education have met resistance, state lawmakers have made an unprecedented push toward for-profit schools, dubious online curricula, and budget cuts and anti-union measures that would make the public teaching profession ever more insecure.

Michigan GOPers have gotten help from outside organizations, including Michelle Rhee’s StudentsFirst group (made famous by the documentary Waiting for Superman) and the Mackinac Center for Public Policy, a free-market-centric think tank. So extreme is their agenda that one recent bill even tried to justify bullying in schools on ideological and religious grounds, drawing outrage and national media attention.

Michigan is at the forefront of a badly misguided reform movement sweeping the country, says Diane Ravitch, a preeminent education historian and a former Education Department official under President George H.W. Bush. “They want to save money on education, and the best way for them to do it is by cutting the number of teachers, getting rid of higher-paid teachers—and to do that they must eliminate tenure and seniority,” she says. “The unions are an obstacle to almost everything they want to do, so they have to neutralize them.”

In April, first-term Gov. Rick Snyder unveiled his new vision for public education in Michigan in a 13-page “special message” to state legislators. Snyder called for eliminating the cap on charter schools, heavily weighting student test scores in teacher evaluations, and weakening teacher tenure. Such changes were necessary, Snyder insisted, to turn around an education system that “is not giving our taxpayers, our teachers, or our students the return on investment we deserve.”

Weeks later, the GOP-controlled state House approved a $13.8 billion budget that slashed education funding by $900 million for K-12 and state colleges and universities. Met with howls of protest, Republicans backtracked but ultimately cut funding by $564 million, according to the Michigan Policy Network. The move helped offset $1 billion in lost revenue after Snyder eliminated taxes on all Michigan businesses save for large-shareholder corporations.

Snyder said in April that his planned reforms wouldn’t meddle with the collective-bargaining rights of teachers and other school employees, but GOP lawmakers went ahead and cut them anyway. They passed legislation during the summer banning unions from bargaining over tenure for teachers and teacher placement across school districts—issues once on the table during collective bargaining. The anti-union Mackinac Center praised the changes, and despite his pledge, Snyder signed them into law in July.

Throughout the summer and fall, the GOP’s union-busting continued apace. In September, state House Republicans pushed legislation banning teachers from emailing about union or political activities on school computers. The punishment for lawbreakers: a maximum fine of $1,000 and up to a year in jail. (The bill remains under consideration in the state House.) That same month, Snyder also signed into law a measure forcing public school employees to pay at least 20 percent of the cost of their health care coverage and, in so doing, take cost-sharing out of the bargaining process. (Before, public school employees’ share of their care costs ranged from zero to more than 20 percent.)

In October, GOP state Sens. Randy Richardville, the majority leader, Phil Pavlov, and Arlan Meekhof unveiled right-to-work legislation for most public school teachers. Also known as “right-to-teach,” the bill would let teachers work under union-negotiated contracts without chipping in a dime for the cost of negotiations. (Right now, unions collect dues from all affected teachers—members or not—for bargaining, but can’t make them pay for political activities.) Richardville said right-to-teach legislation would let teachers “keep more of the money they earn.” The Michigan Education Association, the state’s largest teachers’ union, blasted the bill as politically motivated and an effort to diminish the MEA’s clout.

As Mother Jones reported in October, Pavlov had also hatched a plan to let public school districts outsource the teacher hiring process, effectively privatizing their jobs. Doing so would shift pension and health care costs off the books of school districts and so save money, Richardville said. Unions and Michigan Democrats blasted it as an assault on public education itself. “Gov. Snyder and Republicans have made no bones about it: They’re trying to dismantle public education in Michigan,” state Sen. Gretchen Whitmer, the minority leader, said at the time.

In early October, after a small uproar, Pavlov’s privatization measure got yanked out of a package of right-wing education bills compiled by Republicans. Included were bills to eliminate the cap on charter schools in Michigan, which previously stood at 150, and to pave the way for more “cyber” schools in Michigan. Still another bill in the package would allow home-schooled students to take elective classes at any virtual, charter, or public school in their local school district—a move that the MEA decried as a “back-door voucher scheme” that could drive more students to private, nonunionized schools.

Perhaps the most controversial of the GOP’s moves came in November, concerning a new anti-bullying bill. Named “Matt’s Safe School Law,” after a student who committed suicide in the face of incessant bullying, the drafted bill contained an audacious loophole: Teachers or students couldn’t be penalized for bullying so long as they attributed that harassment to a “sincerely held religious belief or moral conviction.” The father of Matt Epling, the bill’s namesake, called the law “government-sanctioned bigotry,” the national media seized upon it, and even satirist Stephen Colbert mocked it on his show. In the end, the exemption was cut from the measure.

Throughout all this, Michigan Republicans had help. Rhee, the former Washington, DC, education chancellor, worked with GOP lawmakers (PDF) to write the legislation that curbed bargaining rights and weakened teacher seniority rules, among other bills. And providing intellectual cover for the assault on unions and public schools was the Mackinac Center for Public Policy, which as Mother Jones reported belongs to a national network of free-market-geared think tanks modeled after the arch-conservative Heritage Foundation in DC. Funded by a slew of right-wing charities, the Mackinac Center has publicly supported many GOP education reforms, battling the MEA all the way. As Jack McHugh, a Mackinac Center policy analyst, put it in a June email to a GOP lawmaker: “Our goal is [to] outlaw government collective bargaining in Michigan, which in practical terms means no more MEA.”

Michigan Republicans say their reforms save money (PDF), empower teachers, and fix a broken, archaic education model. “These reforms are vital in that we’re trying to turn the focus back to the students,” says Ari Adler, press secretary for state House Speaker Jase Bolger. “The speaker feels that people have been fighting to keep the status quo for too long, and we have seen that that does not work.” (Richardville and Pavlov did not respond to requests for comment.)

The Michigan GOP has felt some blowback for its radical education agenda. On November 8, Republican state Rep. Paul Scott, the House education committee chairman, narrowly lost his seat in a recall election partly triggered by his role in the GOP’s education push. The MEA went all-out to unseat Scott, injecting $140,000 into the election, while Rhee’s StudentFirst reportedly spent $70,000 to defend him. Not missing a step, Republicans named state Rep. Tom McMillin to be Scott’s replacement as chairman. McMillin’s anti-union bona fides brought to mind a brutal image from “The Godfather” for one local radio reporter, who called McMillin’s selection “a horse head in the MEA’s bed.”

According to Ravitch, Michigan’s education agenda reflects a nationwide push among conservatives to blame “bad teachers” for the ills afflicting public education. The problem, she says, is that the reductive “bad teacher” paradigm—and the accompanying push for more charter schools, data-based evaluation, virtual learning, and other policies—fails to address the complexity of education reform and isn’t supported by facts. Reams of evidence cast serious doubt on, say, any link between unions and student achievement, the efficacy of charter schools, or the usefulness of test scores in gauging good teaching. As conservative state legislators in Michigan and elsewhere march ahead with their ideas for reform, there is little about their initiatives to suggest that quality education for school children is their top priority.