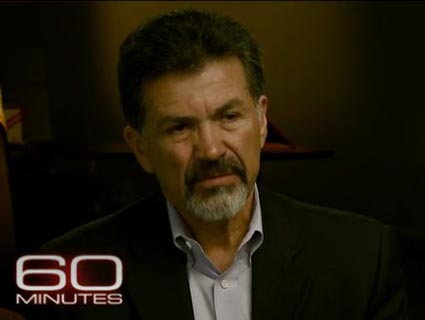 Jose Rodriguez, the former head of the CIA’s Clandestine Service during the Bush administration, was supposed to offer proof that the torture of alleged 9/11 mastermind Khalid Sheik Mohammed and other Al Qaeda detainees led to the discovery of Osama bin Laden’s hiding place. Instead, his interview with CBS reporter Leslie Stahl confirmed the exact opposite.

“I am certain, beyond any doubt, that these techniques, approved at the highest levels of the U.S. government, certified by the Department of Justice, and briefed to and supported by bipartisan leadership of congressional intelligence oversight committees, shielded the people of the United States from harm and led to the capture of killing of Osama bin Laden,” Rodriguez told the Washington Post‘s Dana Priest in a piece inexplicably published in the paper’s Style section early last week.

The debate over the efficacy of torture has been renewed by Rodriguez’ recently published book and the Obama campaign’s agressive effort to remind voters that bin Laden was found and killed under the current administration. Since bin Laden’s death, Republicans have sought to reap credit for the raid by focusing on the torturous interrogation techniques Obama banned by executive order his first few days in office, claiming they led directly to the discovery of bin Laden’s hideout. But the CIA’s own inspector general found “you could not in good conscience reach a definitive conclusion about whether any specific technique was especially effective, or [whether] the enhanced techniques in the aggregate really worked.”

Rodriguez’ 60 Minutes interview doesn’t do much to bolster the case of torture supporters. In fact, it actively undermines it. When Stahl confronted Rodriguez with the fact that KSM refused to divulge the identity of the courier who eventually led the CIA to bin Laden, Rodriguez confirmed what we already knew—that when asked about the identity of bin Laden’s courier, KSM lied.

Rodriguez: Some of these people were not going to tell us everything. Stahl: So you don’t break ’em. Rodriguez: There is a limit, there is a limit to what they will tell us. Actually KSM lied about the courier – whose identity finally led to the compound in Abbottabad, Pakistan, where the terrorist leader he calls Sheikh bin Laden was hiding.

Stahl: Now, here’s what I heard: that Khalid Sheikh Mohammed told you the courier had retired and threw you off the scent for a while.

Rodriguez: That was the one secret he was going to take to the grave, and that was the protection of the Sheikh. He was not going to tell us.

CBS has since posted more of the interview to its website, and the additional footage further erodes the notion that torture led to bin Laden’s whereabouts. “We went to KSM and said ‘What about this courier, [Abu Ahmed] al-Kuwaiti?’ and he became very defensive, and he would not talk to us about it,” Rodriguez says. “But later, we intercepted a message, that he was sending to the other detainees in which he said do not say a word about the courier. Which, to us meant this is important information.”

Rodriguez employed a number of other well-worn fallacies in his defense of torture:

We had to torture KSM, because he’s so tough, but he resisted so it’s not torture. “Oh, he was not going to talk. I mean, Khalid Sheik Mohammed is one of the toughest killers out there,” Rodriguez told Stahl. Later, arguing that waterboarding is not torture, Rodriguez says, “Khalid Sheikh Mohammed would use his fingers to count the number of seconds, because he knew that in all likelihood, we would stop at 10. So this doesn’t sound like a person who is afraid of dying.” Stahl asks “Then why do it? What’s the point?”

Torture works so well, but you know, don’t torture so much. Rodriguez defends the efficacy of torture, but when asked by Stahl about the use of a power drill and threats of rape against his family members on a detainee, Rodriguez says “Stupid things that were done by people who had no authority to do that.” But if torture is so effective, why would it be “stupid” to be even rougher? Wouldn’t it just lead to detainees providing more information?

The month-long ticking time bomb. Rodriguez again uses the “ticking time bomb” scenario to justify using torture, then admits they take about a month to “work.”  “If there was going to be another attack against the U.S., we would have blood on our hands because we would not have been able to extract that information from him,” Rodriguez says of high value detainee Abu Zubayda. “So we started to talk about an alternative set of interrogation procedures.” Rodriguez later admits that the psychologist touting the effectiveness of torture had “speculated that within 30 days we would probably be able to get the information that we wanted.”

Although Rodriguez’ didn’t offer much in the way of new information during his interview with Stahl, he did introduce an inadvertently hilarious metaphor for the kind of tough guy rhetoric employed in defense of torture. When explaining to Stahl his request to use so-called enhanced interrogation techniques, Rodriguez said, “We needed everybody in government to put their big boy pants on and provide the authorities that we needed.”