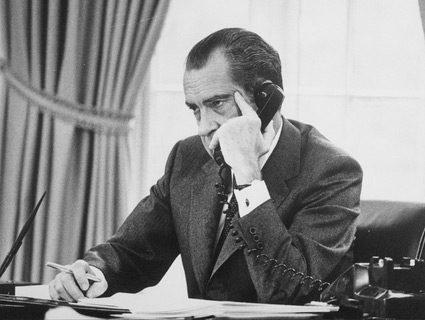 On the heels of a 1939 Supreme Court decision outlawing wiretapping, President Franklin Roosevelt handed FBI Director J. Edgar Hoover secret authorization to spy on Americans, telling himself that the high court couldn’t have meant to extend the prohibition to matters of national security. In 2005, FBI Director Robert Mueller and then-acting Attorney General James Comey led a small rebellion against George W. Bush’s warrantless spying. Their defiance culminated in a confrontation in John Ashcroft’s hospital room, as Bush’s White House counsel and chief of staff, Alberto Gonzales and Andy Card, attempted to get around Comey by pushing Ashcroft, then recovering from surgery, to reauthorize the program from his sickbed.

The contrast, highlighted in Pulitzer Prize winning reporter and author Tim Weiner’s recent book Enemies: A History of the FBI, leaves one with the impression that the arc of history bends towards a more lawful and accountable national security state, and the hope that, Weiner writes, “in a time of continual danger Americans might be safe and free.” As FDR’s attorney general Francis Biddle once wrote, however, “the Constitution has never greatly bothered any wartime president,” and just about every president since has found himself at war, if only against an abstract concept like crime or terrorism.

Still, Weiner has a point. Much of what the FBI does is no longer secret, though how it performs some of its duties remains so. The FBI director no longer gathers intelligence on a president’s political enemies, a practice that reached its zenith during the Lyndon Johnson and Richard Nixon administrations. In response to the Watergate scandal, the Senate Church Committee of the 1970s established congressional oversight concerning the activities of America’s national security agencies. The bureau no longer contains a section that works to purge gays and lesbians from government positions—state, local, and federal. An attorney general like the Theodore Roosevelt administration’s Charles Bonaparte, who thought vigilante mobs were an appropriate check on labor protests, probably couldn’t make it through a Senate confirmation hearing. Probably.

The bureau’s history, though, is riven with lawlessness, and that is a legacy it has not entirely shed. Though a civilian agency, the history of the FBI is intimately tied to the American habit of declaring war on nouns. The forerunner of the bureau was created by Theodore Roosevelt in 1908, who acceded to the presidency after William McKinley was assassinated in broad daylight by an anarchist. He established this forerunner to the FBI in defiance of Congress, which initially said no because lawmakers feared the establishment of an American secret police. Yet Roosevelt bragged to a British politician in 1908 that as president he possessed more power than “any great republic or constitutional monarchy of modern times.”

The lawmakers’ fears were well-founded. For 48 years, the FBI was indeed a covert police organization run by a man whose efforts were frequently focused on policing the political beliefs and private behavior of American citizens—not just busting crime or thwarting terrorism. Hoover’s FBI broke the law casually and frequently; its tools of “law enforcement” routinely included warrantless wiretapping, blackmail, and burglary. Hoover’s wiretaps and break-ins weren’t sanctioned by law. For 50 years, Weiner notes, Hoover just turned the wiretaps off before testifying before Congress so when they asked whether he was wiretapping anyone, he could say “no” and be technically stating the truth. And Hoover protected his authority—and criminal ways—for decades by sharing the fruits of his illegal and pervasive surveillance of US citizens with presidents who craved dirt on their political foes. Hoover hunted Soviet spies (sometimes effectively and sometimes not) and big-name gangsters, but he “saw no great distinction among American radicals—Communists, Socialists, anarchists, pacifists,” Weiner writes. “They were enemies of the state.” Though his powers allowed Hoover to record Martin Luther King Jr. having sex in his hotel room—Hoover believed the civil rights movement was just an extension of the communist plot to subvert the United States—Weiner shows that Hoover’s FBI often was inept at solving the acts of terrorism that justified the bureau’s existence, like the 1920 Wall Street bombing that remained the deadliest terrorist attack on American soil until Timothy McVeigh destroyed the FBI building in Oklahoma City. Hoover’s FBI dismantled the Ku Klux Klan and ended its reign of terror in the South, but only after being directly ordered to do so by President Johnson. After all, it’s not like they were communists.

There are major distinctions between the Hoover FBI and the Mueller FBI. The bureau is certainly no longer a tool paranoid chief executives can impulsively deploy against their political enemies. Congressional oversight exists. The bureau has developed a culture of integrity that has led officials to oppose not just Bush’s warrantless wiretapping, but its use of torture. In between sensational headlines describing FBI orchestrated sting plots that were never going to come to fruition, the bureau has managed to prevent crimes in addition to investigating them.

Yet much of what the FBI once did illegally is now simply legal. The end result of Mueller and Comey’s rebellion was that Congress passed a law legalizing warrantless surveillance, with the support of then-Sen. Barack Obama. Technology has made the old FBI black bag jobs an anachronism, since the Patriot Act allows its agents to acquire much of the same kind of information with less effort. Weiner quotes former FBI Director William Webster expressing concern in 1984 following a sting operation targeting an assassination plot against Indian prime minister Rajiv Ghandi; Webster was worried that stings could turn the FBI into a “Gestapo organization.” Yet, as Weiner notes, such operations have become the bureau’s primary weapon for fighting domestic terrorism, even to the point of infiltrating mosques absent any concrete evidence of connections to terrorism. The attorney general does set legal limits on the FBI’s ability to snoop on Americans—but today those limits allow agents to consider race and religion as “factors” in beginning investigations. Peaceniks are apparently still a national security threat. Hoover drew up a secret list of “thousands” of “suspected subversives” in America who might be indefinitely detained in the event of a “national emergency.” Today’s Terrorist Watchlist reportedly contains over a million.  Despite Congress’ oversight of the bureau, not even Nixon was as adept at maintaining official secrecy as the current president, so it’s hard to know how well that oversight is actually working.

Weiner’s Enemies leaves the reader with the impression that today’s FBI is more effective and less lawless than it’s ever been. This is no doubt true. But given that once-illegal activity has become legal, it’s less comforting. In the end, we didn’t banish Hooverism entirely.