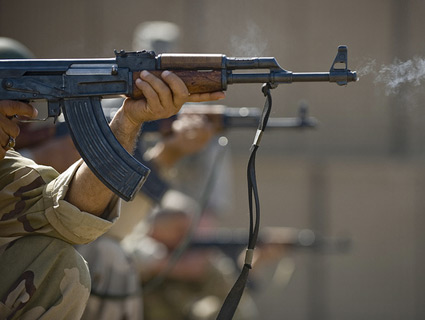 Last Friday, the Obama administration ditched negotiations on the Arms Trade Treaty, the potential UN deal aimed at tightening regulations on the estimated $60 billion global trade in conventional weapons. The past four weeks of negotiations were focused on stemming the flow of arms and ammo into the hands of regimes and actors responsible for perpetrating mass murder and war crimes.

The breakdown occurred on the eve of the Friday deadline, with several countries with large stakes in the international trade (Russia, China, etc.) raising objections to the working text. But major human rights groups including Oxfam and Amnesty International reserved some of their harshest criticism for the Obama administration. “The White House walked away at a critical moment,” Scott Stedjan, Oxfam America’s senior policy advisor, wrote in a statement. “In the United States we already have tough regulations governing the trade of weapons—and this Treaty is about leveling the playing field with the many countries around the world that have weak or ineffective regulations, if any at all.”

Why did the US bail? As the New York Times reported, political pressure came, unsurprisingly, from the NRA and other gun-rights advocates. They claimed that the UN was trying to dismantle the Second Amendment:

Treaty supporters [and activists] expressed anger at the failure after early bouts of optimism that a draft of the treaty circulated this week would satisfy American concerns, notably its possible infringement on the…right to bear arms — an especially delicate issue during a presidential election year in the United States. The supporters contended the treaty’s language specified that it would have no impact on such rights. But gun rights groups like the National Rifle Association said the treaty remained “seriously flawed.”

Fifty-one senators had urged the administration not to sign it in a letter sent Thursday. That letter sent an important signal of defeat because ratification requires 67 Senate votes.

There is a long-running, baseless conservative meme that the United Nations is hell-bent on confiscating firearms from unsuspecting, law-abiding Americans. Folks including Sen. Rand Paul (R-Ky.), the National Association for Gun Rights, and even veteran political analyst Chuck Norris have all fervently warned about the coming “Small Arms Treaty” as a tool of confiscation. (Just for the record, the Small Arms Treaty does not actually exist in any form.) And just recently, the far-right Gun Owners of America pushed the novel theory that the massacre at a theater in Aurora, Colo., was engineered by big-government agents and the UN. (Did they engineer these 55 other massacres too?)

As for the Arms Trade Treaty, diplomats told reporters that negotiations are expected to reboot at some indefinite time in the future, with a UN General Assembly vote hopefully to be held within a few months.