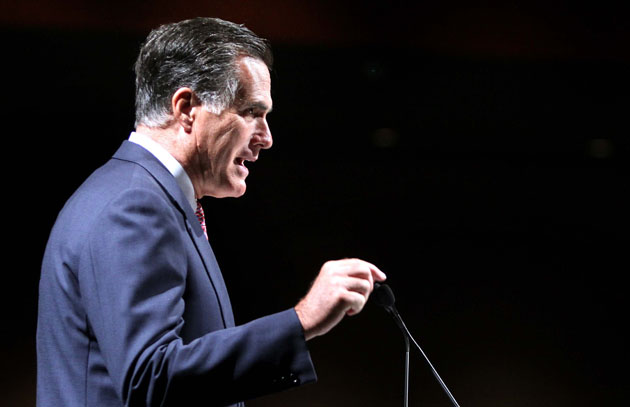 Earlier this year, Mitt Romney nearly landed in a politically perilous controversy when the Huffington Post reported that in 1999 the GOP presidential candidate had been part of an investment group that invested $75 million in Stericycle, a medical-waste disposal firm that has been attacked by anti-abortion groups for disposing aborted fetuses collected from family planning clinics. Coming during the heat of the GOP primaries, as Romney tried to sell South Carolina Republicans on his pro-life bona fides, the revelation had the potential to damage the candidate’s reputation among values voters already suspicious of his shifting position on abortion.

But Bain Capital, the private equity firm Romney founded, tamped down the controversy. The company said Romney left the firm in February 1999 to run the troubled 2002 Winter Olympics in Salt Lake City and likely had nothing to with the deal. The matter never became a campaign issue. But documents filed by Bain and Stericycle with the Securities and Exchange Commission—and obtained by Mother Jones—list Romney as an active participant in the investment. And this deal helped Stericycle, a company with a poor safety record, grow, while yielding tens of millions of dollars in profits for Romney and his partners. The documents—one of which was signed by Romney—also contradict the official account of Romney’s exit from Bain.

The Stericycle deal—the abortion connection aside—is relevant because of questions regarding the timing of Romney’s departure from the private equity firm he founded. Responding to a recent Washington Post story reporting that Bain-acquired companies outsourced jobs, the Romney campaign insisted that Romney exited Bain in February 1999, a month or more before Bain took over two of the companies named in the Post‘s article. The SEC documents undercut that defense, indicating that Romney still played a role in Bain investments until at least the end of 1999.

Here’s what happened with Stericycle. In November 1999, Bain Capital and Madison Dearborn Partners, a Chicago-based private equity firm, filed with the SEC a Schedule 13D, which lists owners of publicly traded companies, noting that they had jointly purchased $75 million worth of shares in Stericycle, a fast-growing player in the medical-waste industry. (That April, Stericycle had announced plans to buy the medical-waste businesses of Browning Ferris Industries and Allied Waste Industries.) The SEC filing lists assorted Bain-related entities that were part of the deal, including Bain Capital (BCI), Bain Capital Partners VI (BCP VI), Sankaty High Yield Asset Investors (a Bermuda-based Bain affiliate), and Brookside Capital Investors (a Bain offshoot). And it notes that Romney was the “sole shareholder, Chairman, Chief Executive Officer and President of BCI, BCP VI Inc., Brookside Inc. and Sankaty Ltd.”

The document also states that Romney “may be deemed to share voting and dispositive power with respect to” 2,116,588 shares of common stock in Stericycle “in his capacity as sole shareholder” of the Bain entities that invested in the company. That was about 11 percent of the outstanding shares of common stock. (The whole $75 million investment won Bain, Romney, and their partners 22.64 percent of the firm’s stock—the largest bloc among the firm’s owners.) The original copy of the filing was signed by Romney.

Another SEC document filed November 30, 1999, by Stericycle also names Romney as an individual who holds “voting and dispositive power” with respect to the stock owned by Bain. If Romney had fully retired from the private equity firm he founded, why would he be the only Bain executive named as the person in control of this large amount of Stericycle stock?

The documents—one of which was signed by Romney—also call into question the account of Romney’s exit from Bain that the company and the Romney campaign have provided.

Stericycle was a lucrative investment for Romney and Bain. The company had entered the medical-waste business a decade earlier, when it took over a food irradiation plant in Arkansas and began zapping medical waste, rather than strawberries, with radiation. The company subsequently replaced irradiation with a technology that used low-frequency radio waves to sterilize medical waste—gowns, masks, gloves, and other medical equipment—before it was transported to an incinerator. By mid-1997, Stericycle was the second-largest medical-waste disposal business in the nation. Two years later, it was the largest. With 240,000 customers, its operations spanned the United States, Canada, and Puerto Rico. Fortune ranked it No. 10 on its list of the 100 fastest growing companies in the nation.

But the company had its woes, accumulating a troubling safety record along the way. In 1991, the Occupational Safety and Health Administration cited its Arkansas operation for 11 workplace safety violations. The facility had not provided employees with sufficient protective gear, and it had kept body parts, fetuses, and dead experimental animals in unmarked storage containers, placing workers at risk. In 1995, Stericycle was fined $3.3 million—later decreased to $800,000—by Rhode Island for knowingly exposing workers to life-threatening diseases at its medical-waste treatment facility in Woonsocket. Two years later, workers at another of its medical-waste processing plants in Morton, Washington, were exposed to tuberculosis. In 2002 and 2003—after Bain and its partners had bought their major interest in the firm—Stericycle reached settlements with the attorneys general in Arizona and Utah after it was accused of violating antitrust laws. It paid Arizona $320,000 in civil penalties and lawyers’ fees, and paid Utah $580,000.

Despite the firm’s regulatory run-ins, the deal worked out well for Bain. In 2001, the Bain-Madison Dearborn partnership that had invested in the company sold 40 percent of its holdings in Stericycle for about $88 million—marking a hefty profit on its original investment of $75 million. The Bain-related group sold the rest of its holdings by 2004. By that point it had earned $49.5 million. It was not until six years later that anti-abortion activists would target Stericycle for collecting medical waste at abortion clinics. This campaign has compared Stericycle to German firms that provided assistance to the Nazis during the Holocaust. A Stericycle official told Huffington Post that its abortion clinics business constitutes a “small” portion of its total operations. (Stericycle declined a request for comment from Mother Jones.)

In 1995, Stericycle was fined by Rhode Island for knowingly exposing workers to life-threatening diseases at its medical-waste treatment facility.

In response to questions from Mother Jones, a spokeswoman for Bain maintained that Romney was not involved in the Stericycle deal in 1999, saying that he had “resigned” months before the stock purchase was negotiated. The spokeswoman noted that following his resignation Romney remained only “a signatory on certain documents,” until his separation agreement with Bain was finalized in 2002. And Bain issued this statement: “Mitt Romney retired from Bain Capital in February 1999. He has had no involvement in the management or investment activities of Bain Capital, or with any of its portfolio companies since that time.” (The Romney presidential campaign did not respond to requests for comment.)

But the document Romney signed related to the Stericycle deal did identify him as a participant in that particular deal and the person in charge of several Bain entities. (Did Bain and Romney file a document with the SEC that was not accurate?) Moreover, in 1999, Bain and Romney both described his departure from Bain not as a resignation and far from absolute. On February 12, 1999, the Boston Herald reported, “Romney said he will stay on as a part-timer with Bain, providing input on investment and key personnel decisions.” And a Bain press release issued on July 19, 1999, noted that Romney was “currently on a part-time leave of absence”—and quoted Romney speaking for Bain Capital. In 2001 and 2002, Romney filed Massachusetts state disclosure forms noting he was the 100 percent owner of Bain Capital NY, Inc.—a Bain outfit that was incorporated in Delaware on April 13, 1999—two months after Romney’s supposed retirement from the firm. A May 2001 filing with the SEC identified Romney as “a member of the Management Committee” of two Bain entities. And in 2007, the Washington Post reported that R. Bradford Malt, a Bain lawyer, said Romney took a “leave of absence” when he assumed the Olympics post and retained sole ownership of the firm for two more years.

All of this undermines Bain’s contention that Romney, though he maintained an ownership interest in the firm and its funds, had nothing to do with the firm’s activities after February 1999. The Stericycle deal may raise red flags for anti-abortion activists. But it also raises questions about the true timing of Romney’s departure from Bain and casts doubt on claims by the company and the Romney campaign that he had nothing to do with Bain business after February 1999.